Bridgette Lynn has been promoted to a lending portfolio manager, Farmers National Bank. She will serve at the bank’s Stanford branch. Lynn has more than 20 years of experience in lending and joined the bank in 1996. She previously served as a senior loan assistant. A graduate of the Kentucky Bankers Association’s General School of Banking, Lynn resides in Stanford.

Ronda Nolan has joined Farmers National Bank as assistant vice president, internal auditor. She has 16 years experience as an internal auditor and compliance director in the banking industry. Nolan is a graduate of the University of Kentucky where she attained a Bachelor of Science degree in finance. 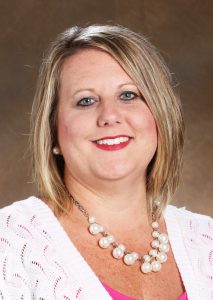 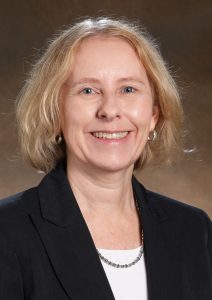 Dievert, a member of the American Angus Association with headquarters in Saint Joseph, Mo., is one of 331 Angus breeders who have been elected by fellow members in their state to serve as a representative at the annual meeting. Representing 44 states and the District of Columbia, the delegates will participate in the business meeting and elect new officers and five directors to the American Angus Association board.

The annual meeting will take place in conjunction with the 2017 Angus Convention, Nov. 4-6, in Fort Worth, Texas. The event is open to anyone in the cattle business and will feature high-profile keynote speakers; educational sessions, including thought leaders from every industry sector; the International Genomics Symposium, sponsored by Neogen GeneSeek operations; Angus University, sponsored by Merck Animal Health; entertainment; evening galas; prize giveaways; and an expansive trade show. Visit www.angusconvention.com to learn more or to register. The early registration discount of $125 ends Sept. 30.

nearly 25,000 members across the United States, Canada and several other countries. For more information about Angus cattle and the 2016 convention, visit www.ANGUS.org.

Eddie Reynolds, formerly of Boyle County, has been named Executive Director of the Brain Injury Alliance of Kentucky (BIAK). This agency serves persons affected with an Acquired Brain Injury, their family/caregivers, along with medical and legal professionals. BIAK does this through advocacy, education, prevention, outreach, and support. 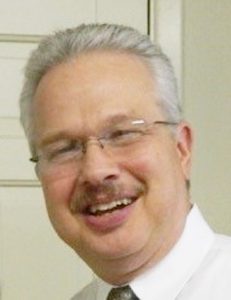 Reynods is the son of the late Bertice Jr. and Bettye G. Reynolds of Perryville. He is a graduate of Boyle County High School, Clear Creek Baptist Bible College, and the Southern Baptist Theological Seminary. He is married to Ann Ziegler Reynolds of Huston, Texas and currently lives in Louisville.

He has been working at BIAK since August 2005, where he was responsible for the outreach, resource development, educational, and advocacy efforts of the agency. BIAK’s office is in Louisville and has local chapters in Florence, Lexington, and in Campbellsville/Lebanon. Each year, BIAK serves over 500 persons who have recently acquired a brain injury.

Reynolds stated that his one of his goals are to see more local chapters across the state that can help people living with a brain injury find local resources and support; as well as, get more people involved in BIAK’s advocacy efforts to make sure that services are available to those who need them.

“We are looking forward to working together to make sure that persons with a brain injury aren’t ignored or forgotten and to make sure that they have the supports necessary to thrive in their community,” Reynolds said. He went on to say that BIAK has a strong board and committed volunteers who will help him in this effort. BIAK’s advocacy efforts have led to the creation of the Traumatic Brain Injury Trust Fund, the Acquired Brain Injury Medicaid Waiver, and other laws that are designed to prevent brain injuries such as graduated driver’s licenses, mandatory seatbelt legislation and sports concussion protocols for schools across the state. 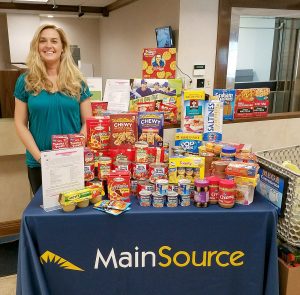 Pictured is Amanda Matherly with MainSource Bank and a collection of non-perishable items to be donated to Mercer County Elementary’s Backpack Program.

Other items that can be included in the backpack include soap, shampoo and/or conditioner, toothpaste, deodorant, laundry detergent and dishwashing liquid.

MainSource remains a large supporter of great organizations in all of the communities it serves through various offerings and employee volunteer efforts. Dedicated to serving the community, the Harrodsburg MainSource will accept donations at its location anytime. The branch is located at 104 South Chiles St. Harrodsburg.