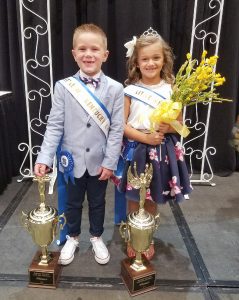 Kinley Marie Tompkins, 5, and Karson Everett Emmons, 7, both of Danville, won the 2017 Little Miss and Mr. Kentucky at the Kentucky State Fair on Aug. 17, while competing against 66 other entries. This is the first time Boyle County has ever won the pageant, which began in 1982.

Kinley is the daughter of Andrea and Ahntoan Tompkins and sister to Taylor, Kamden and Brennan. She is a first-grader at Toliver Elementary School and loves to swim, cheer for CATS team in Harrodsburg, dance, skate, and play sports.

Karson is the son of Rheanna and Randy Emmons and brother to Kaden. He is a second-grader at Toliver and enjoys playing baseball, football, soccer and basketball and riding his dirt bike.

They each won $150, a sash, crown and trophy and will appear at the Pre-teen, Teen and Miss Kentucky pageants throughout the year, as well as many parades. 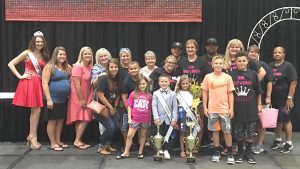 Kinley and Karson’s fans at the Kentucky State Fair pageant.

August 11 — A girl, Emmalie Mattix Dawahare, to Caressa and Matthew Dawahare of Harrodsburg. A boy, Keegan Floyd Kidd, to Madison Dobson and Andrew Kidd of Liberty.

August 13 — A girl, Emilia Lee Lindon, to Erin and Eric Lindon of Danville. A girl, Alexandria Gail Smith, to Jennifer and Reno Smith of Yosemite.

Students at Bate Middle School took runner-up out of 76 teams in the Questions Unlimited Junior National Tournament in Chicago. It’s a competition for academic teams across the country.

“I just want to say how very proud I am of our kids, as they played their hearts out and never quit,” said Coach Anthony Carney. For more information about the competition, visit qunlimited.com. 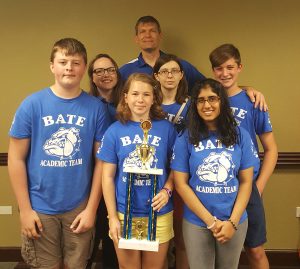