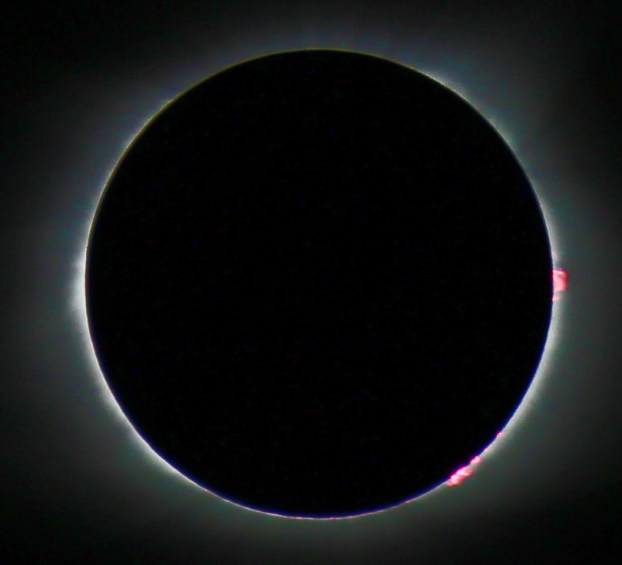 Photo by Ben Kleppinger An exposure of Monday's total eclipse shows red plasma jets known as prominences arcing through the sun’s atmosphere. To capture totality, we lined up a Canon T5i and a 300mm lens on a tripod and used a remote shutter button. An eclipse exposure chart allowed us to dial in the right settings before the big event. The trickiest part was aligning and focusing the camera without looking at the sun unprotected. We wore eclipse glasses and looked through the eyepiece from a few inches away to minimize exposure.

The trek to the path of totality

Excitement about Monday’s total solar eclipse really built up over the last month or two, as more and more news outlets focused their coverage and thousands grabbed eclipse glasses in anticipation of the best chance in decades to see the moon block out the sun. But my wife and I were ahead of the game — we started getting excited way back in August 2016, a full year before the eclipse would happen.

Outer space has long been a fascination for both of us. I’ve been into space since I was small kid, eating breakfast off my favorite placemat which featured the solar system planets (including, at that time, Pluto). One of my favorite stories I’ve ever covered as a journalist is when a Lincoln County student was picked to video chat live with a NASA astronaut on-board the International Space Station. My wife used to work at a planetarium and to this day can point out far more constellations than I can even remember the names of.

So when we discovered how close the total eclipse path was coming to us, we knew we had to travel the few short hours to western Kentucky and see it. We reserved our AirBNB room near the shore of Kentucky Lake last September, before price gouging started taking over. I logged on to look at room prices in early August just to see how we did — we booked our room for $70 a night; prices this month were from $200 to $800 a night or more (and most of them looked closer to $800).

Being a proud local journalist, I know how easily the national media buy in to storylines if they sound dramatic. So I should have known better than to believe the hype when everyone began warning that the entire path of totality would turn into a parking lot on Sunday and Monday. But because we were so intent on and excited to see the total eclipse, we didn’t take any chances and left early Sunday morning.

We figured if traffic cost us a couple extra hours, we’d still be to our host’s quaint bed and breakfast by the afternoon, with plenty of time to get settled and scout out a place where we could walk to for the eclipse. Even if we were stuck in traffic until late, we’d still get there before Monday. As it turns out, none of those preparations were needed — we ran into exactly zero slow-downs on the way there, and most of the time we were zipping along with only a few other cars on the road.

Our concerns about finding a spot to view the eclipse that wasn’t totally overrun were also unfounded. Since traffic had been so light, we abandoned plans to stay within walking distance of our room and scouted wide and far Sunday afternoon, picking out a pair of parks with clear views of the sky where the eclipse would happen. We hung out with our hosts and played some games that night, as the Weather Channel told us the big day would be a scorcher — mid 90s and humid — but only light cloud cover.

Monday morning, we still weren’t willing to risk being stuck on a road, leaning out our car windows to see the eclipse, so we set out for Mike Miller Park in Marshall County — no more than 20 minutes from our room — before 9 a.m. We again ran into zero traffic, and when we arrived at the park, which is probably about the size of Millennium Park in Danville, we had our pick of anywhere we wanted to set up. A couple people had camped the night before near the park entrance, and a handful of joggers were out. Other than two people with eclipse T-shirts sitting in camping chairs on the side of a hill, we were probably the first to arrive. 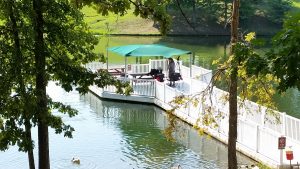 Photo by Amanda Wheeler
Ben Kleppinger sets up on a fishing pier at Mike Miller Park in Marshall County, several hours prior to the solar eclipse on Monday.

We picked out a picnic table on a shaded fishing pier in the park’s lake and set up camp, aligning our SLR camera on a tripod so it was pointed at the sun. We never took a photo of the sun prior to totality — without a special solar filter on our lens, the sun’s direct rays would have burned the camera sensor the same way they can burn your retinas.

I had obviously heard that when totality hits, it’s a powerful moment, but there really aren’t any words to describe it. We watched the partial eclipse proceed with “oh cools” and “wows” as the Moon first dented, then began eating the sun’s disc. The temperature dropped, the sky dimmed and birds of the lake began moving to shore and preening themselves as they bedded down for the “night.” 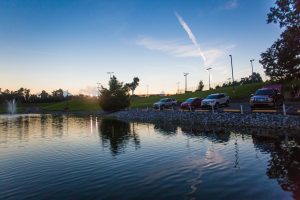 Photo by Amanda Wheeler
Underneath a total eclipse, the sky took on the look of a sunset.

There weren’t any “oh cools” or “wows” when totality hit; the last molten edge of the sun shimmered then disappeared, and instantly the entire landscape as far as you could see popped into an alternate reality. Gasps and silence followed, except for someone’s nearby phone app that counted down to maximum totality and then the end of the eclipse.

Looking back on it now, the closest example I can think of that might communicate a little of the craziness of totality is the “upside down” from Netflix’s “Stranger Things.” But it really is something for which the English language is incapable of describing — it’s just something you have to see to understand.

Scientifically speaking, the total eclipse lasted a little more than two minutes from where we were standing. It didn’t feel like more than 10 seconds.

When it was over, we were left feeling out-of-breath and pumped full of adrenaline. The eclipse was over two days ago now, but the effect is still wearing off for me. It was the most bizarre, beautiful thing I’ve seen in my life. Coming home Monday night, we finally found the bad traffic everyone had been worrying about, but it hardly mattered — we were still high from seeing totality and nothing could dampen our spirits.

Another total eclipse will hit a portion of the U.S. in seven years, and totality in some area will top four minutes — twice as long as this time around. We’re already planning ahead again. 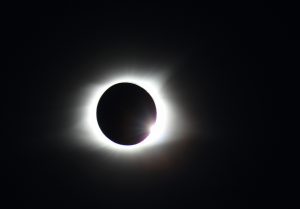 Ben Kleppinger/ben.kleppinger@amnews.com
The sun’s rays bend around the edge of the Moon to reach Earth as a total eclipse nears its end at Mike Miller Park in Marshall County near Land Between the Lakes Monday afternoon. Totality in the area lasted about 2 minutes and 13 seconds. 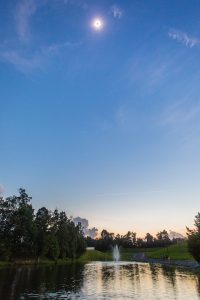 Photo by Amanda Wheeler
During totality, the horizon took on colors similar to sunset and temperature dropped substantially. Birds on a lake at Mike Miller Park took to the shores and began to bed down as though it was night.

Officials at the Bluegrass 911 Communications Center say there’s some bad information out there regarding the potential for Boyle County... read more