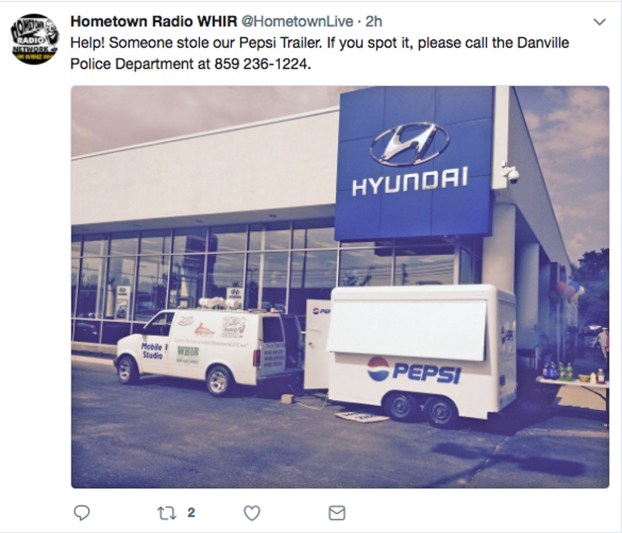 Danville Police are investigating thefts of two trailers overnight Monday night and early Tuesday morning — one of which has been used to serve food to countless people in the area.

Sometime between 7:30 p.m. Monday night and 3:30 a.m. Tuesday morning, a closed trailer was stolen from behind Hometown Radio, located on Ky. 33, north of Danville.

Charlie Perry said they believed that was the time, based on when two of their employees left the station Monday night and he arrived Tuesday morning. He said the trailer was parked behind the building and not easily visible from the road, so it had to have been taken by someone who knew it was back there.

“When they pulled out, they left in a hurry,” he said, explaining that a concrete block and some other things had fallen off the trailer.

The trailer is about six by 12 feet, is white and has Pepsi decals on it, two on the sides, one on the front door and one on the back. It was “full of stuff,” he said, including a grill on the front, and stainless steel pots and pans, paper products, a hamburger warmer, a deep freeze, and lots of utensils inside.

Perry wasn’t sure the total cost of the theft, but said it was about more than just the trailer.

“We have so many stories with that of places we’ve been and people we’ve served. We’ve done a lot with that thing,” Perry said. “It’s like one of us.”

Danville Police Chief Tony Gray confirmed officers are looking into the theft. He said another theft occurred at Southern States, when someone stole an open trailer from the store on Lebanon Road.

Southern States Plant Superintendent Lee Strange said the trailer was a black, five by 8 foot open trailer, and described it as a “lawnmower trailer.” It had ramps on it as well.

Strange said the theft occurred sometime between Saturday evening and Tuesday morning; employees noticed the missing trailer on Tuesday morning. He could not comment on the cost of the trailer, but said it was one they had for sale.

Gray said it is believed there may have been other attempts made to steal trailers in the county, but none could be confirmed.