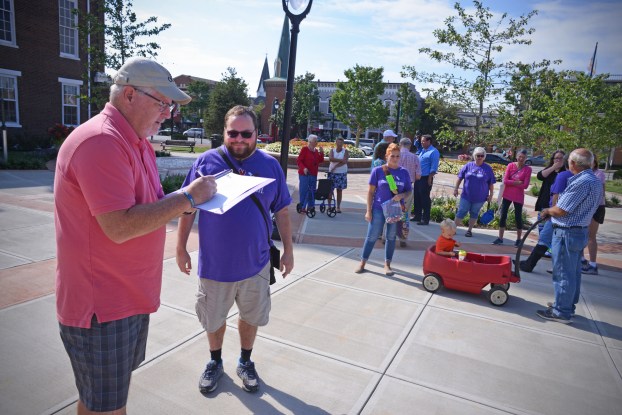 Photo by James Morris Kevin Caudill signs a petition in support of the message of the peace, love and harmony walk organized by his nephew, Bruce Caudill, Wednesday morning at Weisiger Park.

All about love: Danville man wants to heal hostility with harmony 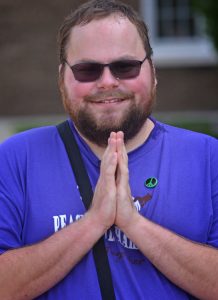 Photo by James Morris
Bruce Caudill said he felt inspired to do something after the recent events in Charlottesville, Va. and so he helped organize a walk for peace, love and harmony on Main Street, Danville, Wednesday. He and Mary Carol Porter asked people to meet at Weisiger Park and help spread a message of peace in the community.

“Bruce is always smiling — almost always,” Porter said of the Danville resident, who is on the autism spectrum. “… he came in and he didn’t have a smile on his face. When I asked him what was wrong, he said he didn’t want to leave the house. You could tell it was more than that.”

Finally, she got the whole story from him.

“He said he was just so tired of what was going on in the world and it was really bothering him,” said Porter, who works at A1 Case Management.

Caudill was troubled by hostility and disagreement around the country and the world, troubled by how people are treating each other.

That’s when Caudill told Porter his plan — he wanted to start a movement.

On Wednesday, Caudill put legs on his movement with the first “Peace, Love, Harmony” walk. Caudill walked Main Street with a few of his friends, wearing purple shirts branded with the walk’s name and the phrase “come together.”

“I think that’s a good thing to spread, love and peace, whether it’s a simple thing, like candy or real hugs,” Caudill said. “Something inside you will click and you feel peace.”

Caudill and his friends handed out peace pins, hugs and kisses — including the chocolate variety.

“(Someone) asked me ‘What’s up with the (candy) Hugs and Kisses?’ and I said, ‘Well, I’m not going to hug and kiss everyone,’” Caudill said. 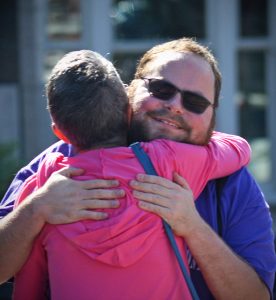 Photo by James Morris
Bruce gets a hug from friend Allison Ramsey before his walk through town.

“He gave out more of his hugs and kisses than the candy Hugs and Kisses. We have a big bag left,” Porter said with a smile.

Caudill said he’s inspired by Martin Luther King Jr. and wants to spread a message of tolerance and non-violence.

Porter said Caudill wants everyone to get along — “He said, ‘It doesn’t matter what race, religion, sexual orientation or gender, or anything, it’s just all together.’”

Porter’s coworker Scarlet Smothers designed the T-shirts the group wore, which received Caudill’s approval before being printed. They attempted to keep the cost down by only using two colors. But Porter said it was important to Caudill to make one of the hands on the design black.

“It was important to show that diversity, to him,” Porter said. “It was on his heart. He wants to change the world.”

The shirts were printed by The Shirt Garage, a local company that employs individuals with intellectual or developmental disabilities.

Caudill and others planned to meet up at the Boyle County Courthouse on Wednesday. They stopped in at a few businesses along their walk. 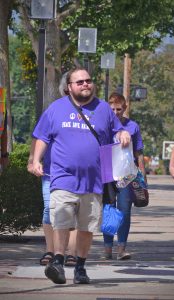 Photo by James MorrisBruce Caudill walks up Main Street asking people to sign a petition in support of his movement for peace, love and harmony, Wednesday morning.

“One of the ladies at the bank was like, ‘It really is that simple,’ and that’s what I thought when he told me about it,” said Smothers.

Katy Abrams, another coworker from A1 Case Management, joined them, bringing with her 1-year-old Lucy.

“Lucy was our youngest peace, love and harmony spreader today,” Abrams said. “… Children are not born with hatred. They’re taught. I thought Lucy would be a good symbol of that. She loves everybody.”

Caudill said there were a few people throughout the day who didn’t feel the love.

One man began arguing with them about politics and the negativity and anger got to be “a little bit too much,” Caudill said.

“I was going to try to talk to him,” Porter said. “(But) Bruce shook his head and brought me over.”

Caudill said he told the man, “Thank you, sir.”

Porter said Caudill told her “it’s OK — if he has that opinion, it’s OK.”

Caudill said he didn’t see how arguing over the disagreements would help. 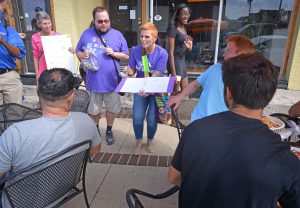 Photo by James Morris
Mary Carol Porter (center) explains the purpose of a petition surrounding the walk through Danville Wednesday morning. She helped Bruce Caudill (left) organize the event. She said Caudill had wanted to do something in Danville to help bring awareness to recent divisiveness in areas of the country.

By lunchtime, more than 100 people had signed a pledge for Caudill’s movement, agreeing to spread peace, love and harmony.

There were a few, they said, who agreed with the idea but weren’t comfortable putting their name on a piece of paper. There were also a few who couldn’t agree fully, Porter said.

“And that’s her prerogative,” Caudill said.

“We don’t force it on anyone, do we?” Porter said.

Caudill hopes to take his movement beyond Danville and to other communities in the state. He said he would love to team up with “the Free Hugs guy,” Ken Nwadike Jr., the man behind the Free Hugs Project. 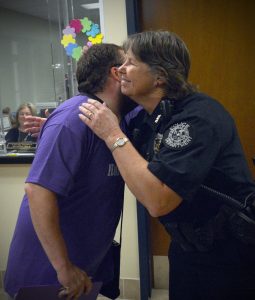 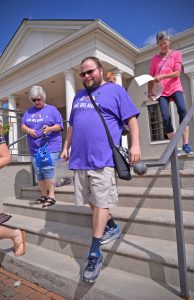 Photo by James Morris
Bruce Caudill (center) walks down the steps of City Hall after he and his supporters visited the police station as part of his peace, love and harmony walk, Wednesday.

Original Kentucky Constitution coming back to its birthplace

Constitution Square in Danville kicked off Kentucky’s 225th birthday celebration, and now it will be hosting a rare occurrence: The... read more