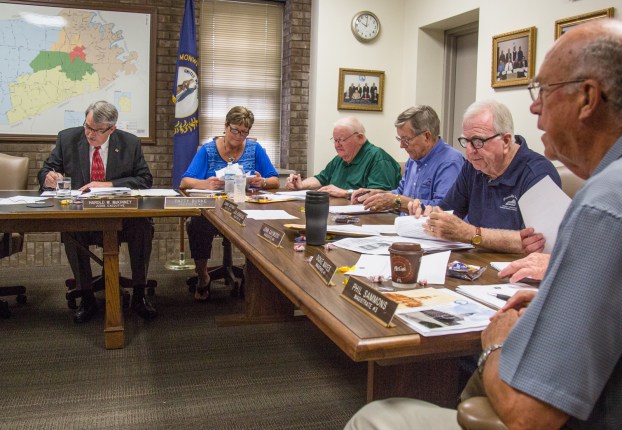 The Boyle County Fiscal Court approved its property tax rate for 2017 on Tuesday, taking the compensating rate that will result in a decrease of one-tenth of a cent in taxes per $100 of assessed value.

Members of the fiscal court jumped to approve the small decrease quickly; Boyle County Treasurer Mary Conley attempted to lay out facts and figures about the tax rate but couldn’t get it done before the rate was already approved.

When governments that assess property tax set their annual rates, they are allowed to take a “compensating rate” — the rate at which they will bring in approximately the same amount in revenue as last year — without holding an additional public hearing. They can also opt to increase their revenues by up to 4 percent, but must hold a public hearing if they do. Increases to property tax revenue of more than 4 percent are subject to a possible voter recall.

Conley had several documents prepared for magistrates laying out some of the county’s historical rates and what would happen to the rates this year.

“I worked on this for you and it was circulated this morning,” she said. “Two pages that are stapled together, the first one is basically prior tax rates and what you actually approved since 2011 and attached to that was kind of an analysis of our annual information going back from ’07-’08 and the fluctuations in your growth and overall assessments, and then — “

“I have a motion; I need a second,” McKinney said, as Conley noted she had more information to pass out.

“I have a second,” McKinney said. “Mary’s going to circulate some stuff.”

“So 2017 actually goes down just a hair,” Hendricks said as he looked at the documents provided by Conley. “Not much, but that’s key — it goes down.”

“Call for the question,” Sammons said.

“I’ve got a call for the question — all in favor say ‘aye.’” McKinney said.

A round of “ayes” went up from the magistrates.

No one voted against.

“We approved it,” McKinney said.

“I wanted it in the minutes,” Conley said.

The discussion returned to property taxes later in the meeting, when Magistrate John Caywood said he thinks the county needs to take a look at how they can address increasing costs for managing trash and recycling.

“Right now, it’s on the expense side of the ledger sheet,” Caywood said.

Solid Waste Coordinator Donna Fechter had come before the court earlier in the meeting to get approval for the new five-year solid waste plan. While the plan doesn’t call for much change, Fechter said it does call for the county to “research options and feasibility for the financial mechanism to offset the expense of convenience centers.”

Boyle County’s convenience centers are costing the county $900,000 this year and the overall solid waste budget is $1.8 million. Those costs are expected to continue rising, she said.

Recycling can help mitigate the increases because the county doesn’t pay to dispose of recycling like it does trash, she said. “But in this five-year plan, I’m asking the fiscal court to have your solid waste coordinator … research options to help you out because you will — this is just my advice — you will need it in the coming years.”

“I just think we need to look at all of our revenue streams and see if they’re current, if they’re up-to-date; what is the expense vs. the income off of it,” Caywood said. “Otherwise, we’re going to be where we don’t want to be in a couple years.”

“I’m just going to make a comment,” Conley said. “You all passed property taxes and I know we don’t ever want to increase taxes, but there should have been at least a discussion about the 4 percent, and I just say that to you thoughtfully.”

“I think not having that discussion hurts what we are up here for,” Caywood said.

Clarification: In the original version of this story, a typo made the rules about increasing property tax revenue unclear. Agencies wishing to increase their property tax revenue above the compensating rate are all required to hold a public hearing, according to Kentucky law.

One of two trailers stolen from Danville was recovered late Tuesday night by Mercer County deputies on Dossett Lane in... read more