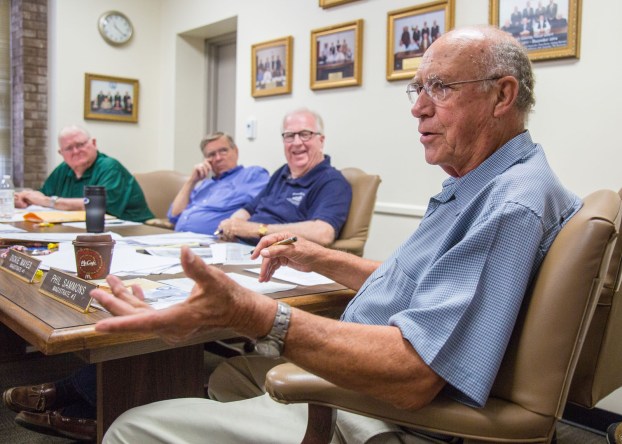 A Boyle County magistrate suggested this week that one solution to the county’s overcrowded jail could be splitting ways with Mercer County, which has worked in partnership with Boyle on the Boyle County Detention Center for close to two decades.

“I think it’s good that we had the joint meeting with (Mercer County), but I have several questions and so on about — I think Mercer needs to really realize what a deal they have,” Magistrate Phil Sammons said. “And I just wonder how it would help and what the situation would be if we said, ‘Mercer, you come and get your people, you do something else with them.’”

Sammons made his comments during a discussion of the cost-sharing ratio the two counties use to pay for the jail’s expenses. Currently, Boyle pays 65 percent of the expenses, while Mercer pays 35 percent. That ratio is designed to be based on the percentage of prisoners each county has in the jail, but there’s a floor of 35 percent that prevents Mercer from paying any less. The most recent percentage for Mercer is actually 29 percent, according to Boyle County Treasurer Mary Conley.

The difference between 29 and 35 percent amounts to about $100,000 that Mercer would be expected to pay under the current interlocal agreement, Conley explained Tuesday. Boyle County has identified about $34,000 in expenses that it pays to help the jail function without any assistance from Mercer County.

“That’s why there needs to be some additional discussion about the interlocal agreement and where we are with that,” Conley said.

Mercer County is expected to bring a proposal to Boyle County to change the interlocal agreement due to the imbalance.

Sammons has previously stated he thinks Mercer is getting a “good deal” and would pay more to house their prisoners if they had to go elsewhere. His comments Tuesday echoed that same theme.

“(Jailer Barry Harmon) ought to be able to tell us what he needs out there and see — do our own study on what it would be like if we had Mercer take their own people back,” Sammons said. “I just think we could work out something. If we only took care of Boyle County people, then we’d be a lot better off. That’s just my theory. I don’t know if the jailer feels that way or not.”

“We’re a regional hub here, where people are coming in to here from five counties around us,” Hendricks said.

Hendricks said he looked at a single day of arrests in Boyle County.

Sammons asked if people from other counties who are arrested in Boyle County could be transferred to jails where they are from. Officials noted that the charges are made in Boyle County and that wouldn’t work.

Magistrate John Caywood asked Sheriff Derek Robbins how many of the drug dealers he arrests are from Boyle County.

Robbins said he would guess the split is about 50-50. Sometimes people will meet in Boyle County as a midway point between northern and southern Kentucky to conduct drug deals, he said.

“As an example,” Caywood said, “… you can’t ask them where they’re from and decide whether to arrest them or not.”

The Boyle County Detention Center has a stated capacity of 220, but regularly has daily populations close to 400. At least twice this year, the jail population has passed 400, prompting jail officials to transfer some local inmates to Casey County temporarily.

When the jail runs out of beds, additional inmates are housed in the jail’s indoor recreation area. Jailer Harmon has said doing that puts extra strain on the jail because there are no bathrooms in that area of the jail, so inmates must be escorted to and from bathrooms.

The report lists average monthly populations of 396 for July, 400 for June and 396 for May. Based on Mercer County’s current population ratio of 29 percent, if there were 29 percent fewer inmates in the jail, those figures would have been 281, 284 and 281.

The Boyle Mercer Joint Jail Committee is currently in the process of choosing a consultant to conduct a study of the jail situation. That study could result in a wide variety of recommendations, including building a new jail, expanding the current jail, and/or changing local policies and programs to reduce recidivism and lower inmate populations.

The three consultant companies being considered have prices ranging from $70,000 to $78,500 for studies that would take from eight to 16 weeks to complete.

Sammons said Tuesday he is not sure about paying for the study.

“I’m not really sold on us spending $75,000 to have a study done when we already know one of our biggest problems,” he said, apparently referencing the Mercer County portion of the jail’s population.