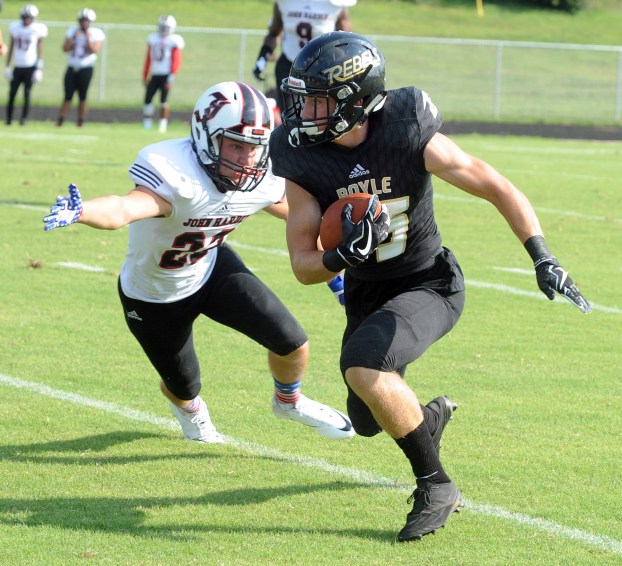 Boyle County football is better than it was last year.

Yes, we’re just one game into the season — but coach Chuck Smith said the differences in his team’s practice and leadership are night and day.

“It’s not even close. It’s completely different,” Smith said. “We may not win any more games, but the attitude and the practice habits of the two teams are not even comparable. They’re trying to do the best they can do at this point.”

Practice this week has been strong, Smith said, after the Rebels’ 41-6 season-opening win last week against John Hardin.

“Practice has been pretty good,” he said. “I think the guys are learning how to practice. They do it with a purpose, not just to go out there and play. They’re doing it with a purpose and objective in mind.”

A new crop of leaders for the Rebels have had a resounding impact on team morale, both in and out of practice.

“We’ve got some guys who have really stepped up and kind of shared that leadership,” Smith said. “Will Bramel has been a solid leader for us, so has Mitchell Paycheck. Sam Tiller has been a leader, so have Kaden Gervacio, John Yeager and Clete Hellyer. Those guys have all stuck out to me, among others, that really want to get this program going back in the right direction.”

Boyle will face a speed test this week against Waggener, who lost 40-14 against Lexington Catholic last week.

Recruiting site Rivals.com lists Waggener’s Jairus Brents and Tahj Rice as the top-two recruits in the state in the 2018 class. Brents is the Wildcats’ quarterback but is being recruited as a defensive back, holding scholarship offers from colleges across the nation, including Alabama and Ohio State.

Rice is a lineman for the Wildcats and is committed to Duke.

“They’re going to get us ready for a lot of games we play this year because of the speed they’ll put on the field,” Smith said of Waggener. “They’re extremely talented, they’ve got a lot of individual talent. Their quarterback/defensive back is probably the No. 1 recruit in the state, he’s been offered by everybody. Then they have a big lineman that I thinkk is committed to Duke, and I think he has other guys that are being recruited and have offers. They are very talented and they can all run. They’ve got athleticism.

“(Coach Jordan Johnson) has done a good job, he’s got them playing hard and they’re going to provide a major test for us. It’s a good test because we’ll see those kinds of players as the year goes on.”

For Boyle County to double its win total in as many weeks, the Rebels will have to handle Waggners’ athletes.

“Offensively, we’ve got to be able to score some points or we’ll eventually be run out.”

Mercer County will face Franklin County in a 4A battle in the first game at 5 p.m.

“I think it’s a really good matchup this year,” Smith said. “Mercer County and Franklin will be a really good game and our matchup with Waggener, our bowl is always well supported and well attended and I think it’ll be the same this year.”