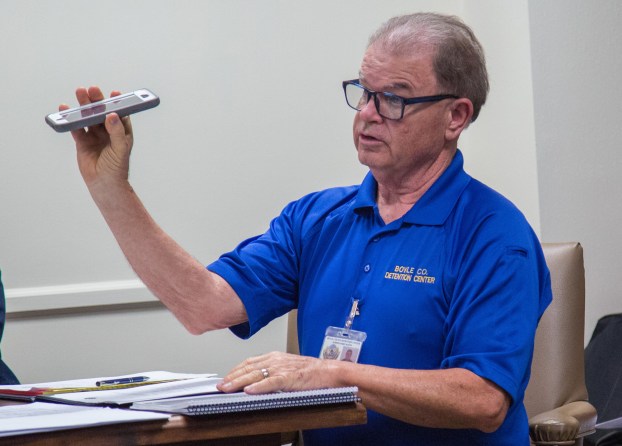 Ben Kleppinger/ben.kleppinger@amnews.com
Boyle County Jailer Barry Harmon holds up a cell phone at this months Boyle Mercer Joint Jail Committee meeting to demonstrate the size of a “small computer” that deputy jailers would carry with them as part of a TracBlue tracking system Harmon wants to install in the jail.

Boyle County Fiscal Court has given conditional approval for a plan to purchase a tracking system for deputies at the Boyle County Detention Center.

The TracBlue system would monitor deputies’ locations continually and allow for better log-keeping to ensure that things like checks on inmates happen when they’re supposed to, Jailer Barry Harmon said earlier this month.

“This will allow for us to track everything, every movement of every deputy,” he said. “If they go out and take a smoke break outside, when they go out the door, it says ‘out of building.’ When they come back in, it’ll say ‘in the building.’”

The system works through several pieces of technology: Deputies will carry “small computers” about the size of a cell phone in their pockets and wear wristbands, which will communicate via Bluetooth wireless technology; and sensors installed around the jail will be used to verify when deputies go certain places.

“This will eliminate falsification where someone puts in the log” that they check on an inmate — perhaps one on suicide watch — but they didn’t actually do it, Harmon said. “With this system, it will tell on them.”

The equipment for the system would cost $9,640; installation and training would cost $1,500; and support and maintenance would cost $9,847.50 per year for three years, according to quotes from Trac Software provided by Harmon.

Right now, there’s about $132,000 in that fund. Legally, those funds can only be spent on things that benefit inmates, Harmon said.

“It will be for the benefit and the safety of the inmates,” he said. “We don’t have to have it; it’s not mandated.”

Approval of the purchase comes with a couple caveats. The Boyle and Mercer attorneys are still looking into whether or not the TracBlue system can be considered a product from a “single-source” vendor — meaning there are no other comparable products available. Because the cost is more than $3,000, the counties must bid out the project unless it’s a single-source vendor, Boyle County Treasurer Mary Conley explained.

Harmon and Chief Deputy Brian Wofford have said they believe TracBlue will qualify as a single-source vendor.

“The technology is not the same,” Wofford told members of the Boyle Mercer Joint Jail Committee earlier this month. “There’s other companies out there that do similar things, but not on this level that works with our existing software.”

“Providing what they provide — they’re the only company; they’re ahead,” Harmon said Tuesday, when the Boyle County Fiscal Court gave tentative approval.

Both fiscal courts in Boyle and Mercer counties must approve before the equipment can be purchased. Boyle County Judge-Executive Harold McKinney said a contract will have to be approved as well.

Hospital officials have neither confirmed nor denied a rumored merger of Ephraim McDowell Health and the James B. Haggin Memorial... read more