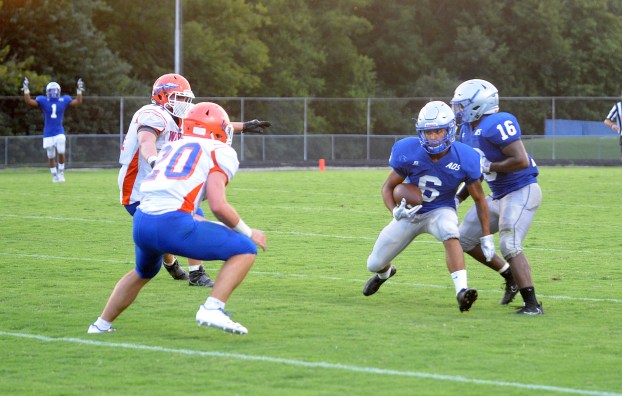 The Admirals are off to a great start.

Danville football will look to build on its 36-0 victory last week against Frederick Douglass as it takes on Knox Central Saturday in Corbin.

Knox Central is in class 4A and won its week zero game against Letcher County Central 27-20. The team was 4-6 last season.

“We’re excited about playing in Corbin and in their bowl, we think it’ll be a good experience,” Danville coach Clay Clevenger said.

“I felt like we learned some things and saw quite a few things from the game film from last week that we need to improve on,” Clevenger said. “Hopefully we’ll come out and improve on those things.”

Clevenger said that his seniors have done a good job in leading the team this year and pointed out three that have impressed him so far this season.

“I’ve been pleased with how Christian Hill has really been working hard and it is showing with his play on the field,” Clevenger said. “I think you’ve seen a different D’Mauriae VanCleave this year, as far as stepping into a leadership role and working hard, along with Don Harris. Those guys are stepping it up. I think the other seniors are not far behind, but those three are upping their game right now.”

VanCleave scored the first points of the season for Danville on an interception return for a touchdown last week. He added two more rushing touchdowns on five carries.

Quarterback Zach Thornton completed 11-of-20 passes for 110 yards and one touchdown and one interception, targeting Jaleel Warren five times for 68 yards and a score.

Defensively, the Ads recovered one fumble as well as VanCleave’s interception to handle the

Clevenger said it will take more of the same for his team to win against Knox Central.

“I think we’ve got to go out and play our game, take care of some of the little things that we did wrong last week as far as holding the same blocks better,” he said. “We did a good job in the turnover battle, that’s always important going into a game as well.”

Danville kicks off in the first game of the Cumberland Falls Pigskin Classic at 5:30 p.m. Corbin is hosting the classic and will play the following game against Alcoa, Tennessee.

Danville’s boys soccer game Tuesday was called off due to weather, but it showed a glimpse of how effective the... read more