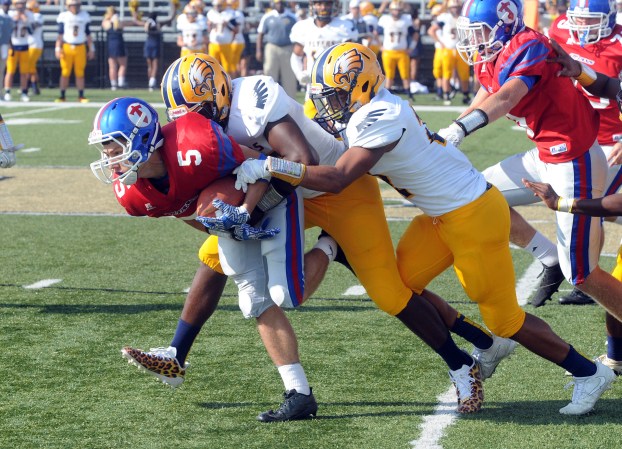 Mercer County came out flat Saturday in the Rebel Bowl against Franklin County.

But a halftime pep-talk from Donald Smith and encouragement from head coach David Buchanan and his coaching staff helped Mercer County to a 35-25 victory.

The first quarter was all Flyers. Tre Simmons caught a 61-yard touchdown pass to open the scoring, then Mercer quarterback Gunnar Gillis turned the ball over twice for the Titans in the period. Jesse Thurman ran in a four-yard run to make it 13-0 Franklin, five seconds into the second quarter.

“We just were not sharp starting out, at all,” Mercer coach David Buchanan said. “I give Franklin County credit for that, I think they were more ready to play than we were. They got after us. They did a nice job. Give them credit for a great start.

“We struggled this week in practice, and we paid for it with a horrible start. Our first quarter was like we had practiced all week.”

Mercer got on the board with a trick play: Wide receiver Trevon Faulkner received a reverse and threw to Aaron Johnson for a 40-yard touchdown.

With four seconds left in the half, Franklin led 13-7.

The Flyers would score in those final moments with a fun play of their own: Simmons was on the receiving end of a hook-and-ladder and scored from 36 yards out as time expired.

“Part of our offense is fun,” Franklin head coach Eddie James said. “I thought we were in a good spot, we had the ball where we wanted it. I think in those times, everybody plans on you going deep and taking a shot in the end zone. We tried something a little different and it worked out.”

Simmons added his third score of the game just 97 seconds into the second half to put Franklin ahead 25-7.

From that point on, Mercer would outscore Franklin 28-0.

“We’re a young football team, I think sometimes we can get a little ahead of ourselves,” James said. “I don’t think our kids ever quit or anything like that, I think we’ve got to learn to play when we’re ahead. I think we got a little lackadaisical, and they started building some momentum and ended up turning the game.”

Jackson Lewis and Gillis each had a touchdown run to cut the Flyers’ lead to 25-21.

Gillis hit Faulkner with a 11-yard touchdown pass to take the lead, and Bryson Yeast would cap things off with a one-yard run of his own.

Buchanan said that he’s learned that if he and his coaches are patient, his team will follow.

“Being old, one thing that I’ve learned is that if you can just not panic, and just keep doing what you do and stay focused, you can fight your way out of stuff,” he said. “You can be critical of me and say I don’t change enough or I don’t adjust enough, but I don’t panic. I believe in my kids and I believe in what we do. I believe that if we’ll ever start do what we’re supposed to do, we’re going to get what we want. And that’s what happened tonight.”

Mercer and Franklin share a region in class 4A, so there’s a chance the teams will meet in the postseason.

“We’re going to move on and wrap up this film tonight and move on to Woodford County. Mercer County is in our region, so there’s a chance we see them again, if things happen,” James said. “We’ve just got to move forward and keep getting better, especially being young.”

Mercer running backs Jackson Lewis and Bryson Yeast combined for 34 carries, 146 yards and two scores in the game. Malachi Yulee ran once for 31 yards on Mercer’s opening drive but was injured after the play. Buchanan credited their offensive line again for playing well inside.

“They really did, they did a good job. They run hard and they play hard,” Buchanan said. “They’re good kids. We also blocked for them, our O-line did a good job for them.”

Faulkner had an interception to seal the game for the Titans, who improve to 2-0.

HARRODSBURG — Mercer County wasn’t quick out of the gate in Saturday’s game, but that changed after the first quarter. The... read more