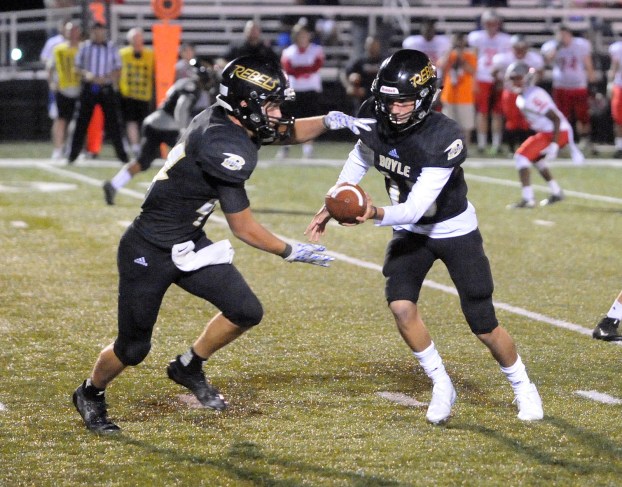 The Rebels did just that, taking care of business to improve to 2-0 after a 54-19 victory.

“Reese is a big play guy for us,” coach Smith said. “That’s what he does. He can never get tired of that, he’s always got to be that guy. Tanner, I thought, ran the ball really well. Landen (Bartleson) was banged up, he tweaked his ankle yesterday. So we’ve got to get him back 100 percent.”

The Rebels found themselves down early, even after Reed Lanter hit Reese Smith on a 26-yard touchdown pass.

Waggener star Jairus Brents took the ensuing kickoff back for a touchdown to even the score at 6-6 with 5:48 to play in the first quarter.

After that touchdown, however, Brents struggled to find room to maneuver.

“I think that we really, other than the kickoff, he really didn’t have anything,” coach Smith said. “We sacked him several times. I thought we did a really good job on him, to be honest with you. I was really concerned about him.”

Waggener would score again on a trick play: Wide receiver Manny Harper received a handoff and threw to wide-open teammate Marlon Kimble to push the Wildcats ahead, 13-6.

“It started really ugly, we gave away easy scores,” coach Smith said. “The kickoff return and the reverse pass, it was like we were giving them away. I was proud of the guys because we kept plugging away and staying the course. The offense figured it out and started putting points on the board. The defense played pretty good other than the reverse pass. Interference to give them a first down after a fourth and 100 yards. I’m proud of the guys, they played hard and overcame.”

Lanter would hit Reese Smith a second time in the corner of the end zone to even the score.

After a 50 yard Reed-to-Reese strike, Crawford would score his first rushing touchdown of the night to put Boyle ahead, 20-13, before halftime.

Nick Walker picked off a botched pitch play to score from 26 yards out in the first score of the second half.

“I thought Nick maybe had the play of the game down here,” coach Smith said. “He got that fumble that went right in his hands  and got that touchdown. We were all flat and that really got us in motion to put us up two scores. Nick is a big-play guy.”

Brents scored his only rushing touchdown of the night on the next Waggener possession, but from there, Boyle would hold the Wildcats’ offense in check.

Crawford scored Boyle’s next touchdown to push the Rebels ahead two scores.

Linebacker Kaden Gervacio forced Brents to fumble in the backfield on the Wildcats’ next drive. The fumble was picked up and scored by Wilson Kelly. Boyle led 31-19 after three quarters.

Crawford scored his third TD on a 27-yard run to open the fourth quarter, and Andrew Sacco scored the final touchdown of the night, a four yard run.

Boyle County football is better than it was last year. Yes, we’re just one game into the season — but coach... read more