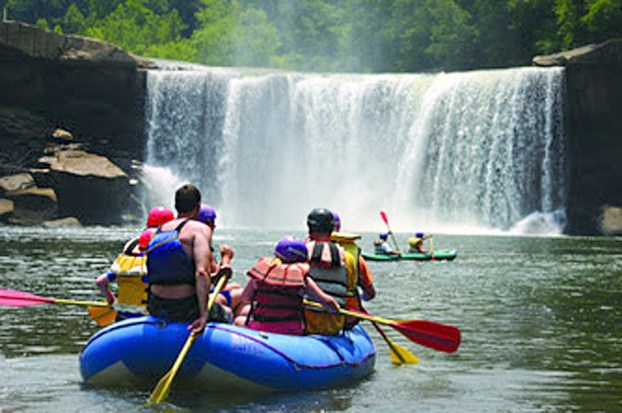 Photo submitted Cumberland Falls is the home of a beautiful waterfall, 125-feet wide and 65-feet high, that also produces a “moonbow” during a full moon.

LOUISVILLE – Six Kentucky State Parks were honored as part of Kentucky Living magazine’s “Best in Kentucky” awards announcement. Perryville Battlefield State Historic Site was one of the parks that received a mention.

More than 100 award winners were announced Thursday at the Kentucky State Fair.

“Our parks are honored with these Best in Kentucky awards and we appreciate the public support all of our parks and our employees receive,” said Parks Commissioner Donnie Holland. “We’re in some great company with all of the attractions, businesses and people that were recognized.”

Cumberland Falls State Resort Park near Corbin was recognized with three awards: Winner of the romantic getaway location; second place in the tourist attraction category and added to the Best in Kentucky Hall of Fame for scenic view. The Hall of Fame honor is awarded to attractions that have won the same category three consecutive years.

Cumberland Falls is the home of a beautiful waterfall, 125-feet wide and 65-feet high, that also produces a “moonbow” during a full moon. The park has a lodge, cottages, restaurant, campground, hiking trails and many other recreational activities.

Two other state parks were added to the magazine’s Hall of Fame: Perryville Battlefield State Historic Site for Civil War battlefield and General Burnside Island State Park for golf course. Perryville preserves the site of the largest Civil War battle in Kentucky that resulted in more than 7,000 casualties. General Burnside has an award-winning 18-hole golf course surrounded by Lake Cumberland near Somerset.

For more information about these parks and other Kentucky State Parks, visit www.parks.ky.gov For more details about the Best in Kentucky awards, visit: www.kentuckyliving.com