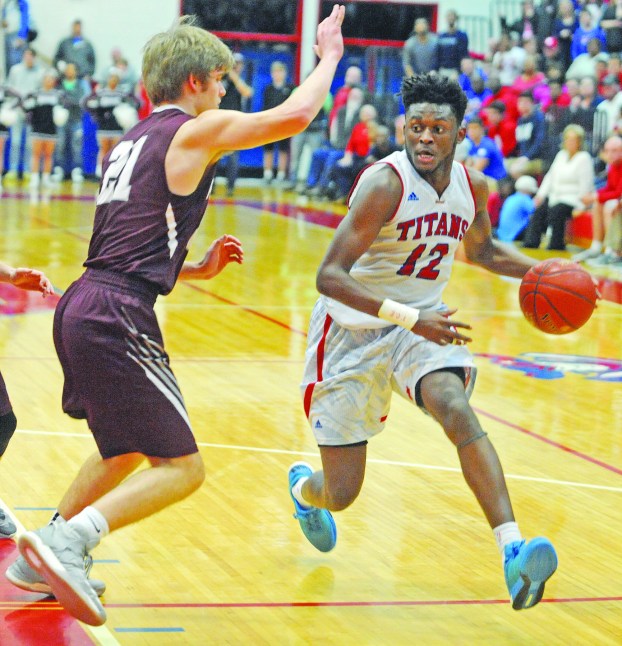 Northern Kentucky has earned a commitment from one of the top basketball players in Kentucky.

Mercer County senior Trevon Faulkner committed to the Norse Monday after visiting the school last week. Faulkner is a contender for the 2018 Mr. Basketball award and has already had a prolific career at Mercer County.

It’s Northern’s commitment to Kentucky that stood out to Faulkner. He said he did a lot of thinking with his family, and in the end, Northern seemed like a ‘family’ atmosphere.

“I just did a lot of thinking with my family. I went on a visit, I was really looking for somewhere that fit me as a player on and off of the court,” Faulkner said. “The coaches, I just felt like they helped me the most, and the players, I feel like I’d be playing with some really good players. The school, the education, I want to study business and they have a good place for me to do that.”

“There was a lot of connection with him and the other Kentucky kids, and he really, really liked that about Northern,” Mercer coach Josh Hamlin said. “They’ve got guys who are contributing on a national level. That appealed to Trevon. He just talked about how much of a family atmosphere it was, between the coaching staff, the academic counselors, the players, he just felt like it was home.”

When Faulkner made his decision, he said his parents were thrilled.

“My dad was really happy,” he said. “He told me he loved my decision and said he’d be happy wherever I went. My mom was happy, first thing she said was ‘free education.’ Both of my parents were happy and that’s what it really boils down to. They can come watch me play, it’s not that far away.”

Right now, his parents are watching him on Friday nights. Faulkner is a star safety and wide receiver for the Titans’ football team and now doesn’t have the college decision weight bearing down on him.

“I felt like it was something I could go ahead and get off my shoulders, focus on school and football,” Faulkner said. “All that pressure on my shoulders, it gets annoying a little bit. Just to know that I have somewhere that I’m going, it’s paid for, somewhere I feel comfortable, it feels good.”

Hamlin said that’s what is rare about Faulkner — he doesn’t want the attention that the recruiting process brings.

“Trevon Faulkner is a 10-times better person than he is a basketball player,” Hamlin said. “He doesn’t have a Twitter. It doesn’t have to be about him. He doesn’t want the attention, he’s perfectly fine going to the basketball gym and no one knowing he’s there.”

That unselfishness was epitomized in Saturday’s bowl game against Franklin County, when Faulkner and teammate Kaelin Drakeford both went up for an interception. Drakeford got to it first, and Faulkner was nothing but overjoyed for his teammate.

It’s those kinds of actions that will help him at the next level as well, Hamlin said. He expected Faulkner to step into a point guard role at NKU.

“His offensive game, he’s strong, he attacks the rim very hard and can finish through contact,” Hamlin said. “He’s probably going to play the one a lot up there. His ball handling has improved a lot this summer, playing with 22 Vision and playing with guys like Romeo Langford and against guys like Zion Williamson and Emmanuel Quickly, some of the top guys in the country. He went up against that competition this summer and he’s been working all summer to improve his game. I think that Trevon will step in as a freshman in the Horizon and be an immediate impact player for them.”

“Trevon right now, in my opinion, can play defense at any level,” Hamlin said. “He’s probably one of the best defenders in the state, he’s just so strong, so long and so athletic. You see it from him on the football field, the way he covers so much ground. It’s similar in basketball.”

Hamlin will be Faulkner’s third coach in his four years at Mercer, but that hasn’t limited his ability. He’s thrived under each coach — Josh Cook in his first two years, Kurt Young last year and Hamlin this year.

“First year, coach Cook was a really good coach and it was fun playing with him those two years. I learned a lot from him,” Faulkner said. “Coach Young, I liked the way he played. It was really fast. I feel like we could’ve done more if we made it to state. I’m mad it ended that way but this year we’ve got coach Josh Hamlin, someone I’ve really (enjoyed) being coached by. That’s someone that I’m already close with, I can connect with. He is a good coach and he’ll push everybody to the next level.”

Faulkner said he’ll likely major in something business-related at NKU, although Hamlin said he could be a great history teacher. But between the academics and athletics, NKU was the fit he liked best.

“All of the schools that were recruiting Trevon were great basketball and academic institutions,” Hamlin said. “That’s the one thing, we sat down and he wanted an athletic and basketball opportunity, but he wanted something that prepared him for life after basketball. He felt that Northern gave him that, and he can play in a great league against great competition. There’s guys there who will play in the league, play overseas, and that’s something that appeals to Trevon because the competition he’s going against in the Horizon is going to be good every night.”

Faulkner’s not one to shy away from competition, and he’ll have that at NKU. After Lavone Holland — a senior from Ballard — leaves, Faulkner could fill that role.

Faulkner by the numbers

*Stats from junior season, aside from points, include 31 of 33 games played.

Mercer County came out flat Saturday in the Rebel Bowl against Franklin County. But a halftime pep-talk from Donald Smith... read more