Audience members were given time to ask questions and make comments. Many questions pertained to the upcoming special session to address pension funding. Attendees were assured that any changes made would be for future retirees and only in incremental stages. Those who did not attend missed a great chance to meet both their legislators and KRTA officials. KRTA is the only organization whose sole purpose is to advocate on behalf of retired teachers.

Jacob Tamme, an entrepreneur, football star at the University of Kentucky and a veteran of the National Football League, has been named to the Farmers National Bank Board of Directors. 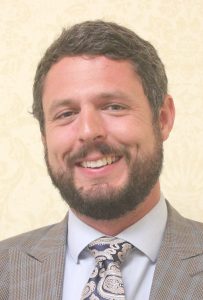 A Danville native and resident, Tamme is a businessman and owns and operates a farm in Boyle County. Jacob and his wife, Allison, are founders of the Swings for Soldiers Classic, a charitable golf event that supports veterans. The Homes for Our Troops organization is the beneficiary of the golf event, and its mission is to build specially adapted homes for wounded veterans.

“We are very pleased to add Jacob to an already strong board,” said Greg Caudill, CEO of Farmers National Bank. “He will bring youth, an entrepreneurial spirit and a strong desire to become involved in his hometown to the bank’s governing body. He is also well connected in the larger Bluegrass region, which is important to us as we continue to grow. We look forward to his contributions to our organization for many years to come.”

Tamme was a four-year football letterman at Boyle County High School prior to his playing career at UK, which included All-SEC athletic and academic honors. He has played in the National Football League for nine seasons as a member of the Indianapolis Colts, Denver Broncos and Atlanta Falcons. Though not currently on an active National Football League roster, he’s still eligible to play.

J. Hadden Dean appointed to Board of Directors of the Kentucky Bar Foundation

Dean is a graduate of the University of Kentucky and the University of Louisville’s Brandeis School of Law. He was admitted to the Kentucky Bar in 1995. Mr. Dean is a partner at the law firm of Sheehan, Barnett, Dean, Pennington, Little & Dexter, P.S.C in Danville (www.danvillekylaw.com) where he has practiced since 1997. His practice includes personal injury litigation, criminal defense, legal malpractice, real estate litigation and general civil litigation. He also serves as general counsel for Inter-County Energy Cooperative. Dean is involved in many community organizations including the YMCA, Ragged Edge and the Harrodsburg Baptist Church. He has also volunteered his time at local high school and middle school business/law classes and been actively involved with the Mercer Youth Soccer Association.

Since 1988, the Bar Foundation has granted more than $3 million to law-related projects designed to educate the public and ensure the fair administration of justice throughout the Commonwealth. An example of a project funded by Bar Foundation is this year’s $15,000 award to the Legal Aid Society to train and match volunteer attorneys with low-income veterans with civil legal problems in the areas of consumer law, family law, government benefits, and housing throughout the state.

The article “Could Danville support a downtown hotel? CVB will pay $15K to find out” that appeared in Tuesday’s Advocate-Messenger... read more