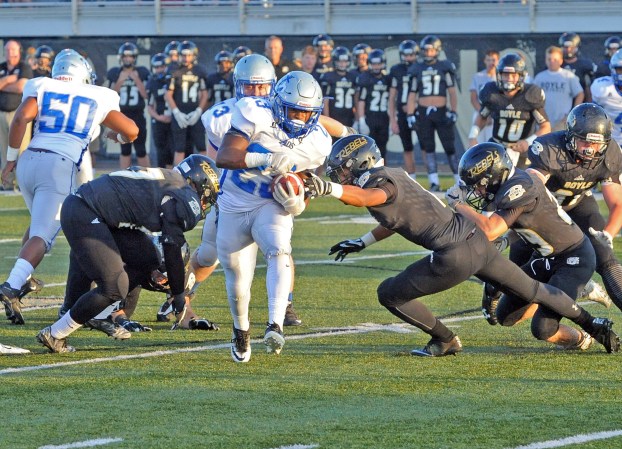 Battle of the undefeated: Admirals host Rebels in cross-town tilt

The Rebels and Admirals will square off on the gridiron in what will almost certainly be a drenched affair.

But don’t let that damper your spirits: Both teams are 2-0 and both head coaches are expecting an exciting game.

“It’s an exciting week,” Danville head coach Clay Clevenger said. “You just try to go out there and get as much work done and improve. Kids are focused and dialed in, you don’t have to worry about that as much during Boyle County week. I think they’ll be excited to play.”

The Admirals’ high-speed offense is back this season, with just three other teams in Class 2A scoring more than Danville.

Boyle faced a similar speed test last week against Waggener and Jairus Brents, but head coach Chuck Smith said that the Admirals have plenty of weapons to watch.

“No. 7 that they’ve got, he can go. He’s every bit as fast as the kid at Waggener,” Smith said. “They’ve got other weapons; I think they’ve got four or five kids who can flat-out play. The running back — he’s a beast. Then they’ve got a really good player at tight end. No. 3, the receiver is just a really, really good athlete. And their offensive and defensive lines are really, really solid too.”

No. 7 — D’Mauriae VanCleave — posted three touchdowns in Danville’s first game of the season, a 36-0 rout of 6A Frederick Douglass. Running back Don Harris has posted two rushing touchdowns in two games and averages just under 10 yards per carry.

Wide receiver David Walker (No. 3) has posted just two catches this year but burnt the Rebels on four catches for 84 yards and two scores last season.

But don’t tell either team about last season’s game: Both are focused on the current task.

“One of our mantras is ‘play the next play,’” Clevenger said. “Whatever happened behind us is behind us. We had to do that last year — we came into that game with a running clock being put on us the year before. I think that you’ve just got to play the next play, go out and compete, execute and see what happens.”

Danville’s offensive execution wasn’t perfect against Knox Central last week — the Ads finished with three turnovers — but the defense was there to carry the load. Chase Handy, Darrian Bell and Tanner Ford all returned turnovers for points. As a team, Danville forced Knox Central into eight turnovers.

Clevenger said the team that limits mistakes and capitalizes on big-play opportunities will have the advantage. Boyle’s talent in the trenches — notably Purdue commit Will Bramel and 2016 Advocate-Messenger Defensive Player of the Year Mitchell Paycheck — will be a focus for Clevenger and his team.

“The biggest thing is how we handle the big-game scenario,” Clevenger said. “I think Boyle County, their up-front play on both sides of the football is something that we’re going to have to be able to neutralize. I think the team that makes the fewest mistakes and gets a break or two, a big play or two, is probably going to be the team that wins.”

Danville’s big-play ability blew Boyle away last year, and Smith said his team needs that to change this time around.

“We’ve got to be able to block them offensively; I think their D-line is really good,” Smith said. “From a defensive standpoint, we just can’t give up the big, easy plays. That’s what they’re very capable of — the big plays. Last year, we gave up big play after big play and that’s why we never even had a chance. We missed way too many tackles; we did a poor job of tackling their big running back. We just didn’t do a good job, and we’ve got to do a better job on the big plays.”

Boyle’s big-time playmakers will have to step up as well: Reese Smith has posted five interceptions in two games this year and has caught two touchdowns. Kaden Gervacio has been a force at linebacker and Nick Walker returned a botched handoff for a touchdown against Waggener.

Both coaches agreed that it was the right decision to move the game.

“I think you just have to do the best interest of all parties,” Clevenger said. “In this situation, we’re having to play at the same time as the soccer games. You can’t do that, but I think it’s probably the safest move for the student-athlete. At the end of the day, that’s what you have to weigh the most.”

So how will the rain affect the game?

“If it rains, it’ll be a disadvantage to both teams,” coach Smith said. “Both teams have to play in it. I don’t know if it’ll hurt one more than the other — I really don’t. I just think it was the right decision because Friday would be a disaster.

“(Forecasts) are calling for lots of rain. I think they extended it to Saturday as well, so that wasn’t an option either. Tomorrow there’s even a chance of rain, but at least you have a chance of getting the game in. I think it was the best decision and the right decision. Everybody’s just got to get ready.”

Both Boyle and Danville played Saturday, meaning there’s just a four-day break between games. An already-short week is shorter with a rivalry match on the line.

“That’s part of the discussion, but you see college teams play Saturday then turn around and play Thursday,” Clevenger said. “Especially when you don’t know ’til Wednesday morning, it probably would’ve changed how we practiced this week if we had known Monday or (Tuesday). But at the end of the day, it’s a sudden change. We talk about that with our football team all the time — when a turnover or something comes up during a game, it’s a sudden change. You’ve got to go out and respond. Obviously, this is a sudden change. We just have to go out and handle it and respond the right way.”

Eye on the prize

Coach Smith said his team doesn’t need to be reminded about last season’s 43-15 loss. Practice this week has been focused.

“It has been going pretty good,” the Boyle coach said. “Our kids as well as their kids understand it’s a big game. It’s one of the best rivalries in the state. Both teams should be ready to play. Our performance last year was really, really disappointing. It was disappointing to our players, our team, our fans, our coaches, everybody. Hopefully we can have a better performance this year than we had last year and represent our school a lot better than we did.

“Really, nobody has said a whole lot about (last season’s loss). I think it goes without saying, if that makes sense. I think we were embarrassed last year and I don’t think anyone wants to talk about it. I think they would rather go out and do something about it rather than talk about it. Hopefully that’s our attitude.”

Clevenger said he wants his team focused on this week but know that the overall goal still lies in December.

“We’ve got to improve offensively,” he said. “The big picture is that this is the third game of the season. This is a big game, but it’s the third game. We’re hoping to make a deep run into November and December and you’ve got to get better week in and week out. You want to go out and do whatever you can to win the big game, you also want to keep in mind the big picture and understand that you’re working toward the process of being able to play your best football when district play and the playoffs hit.”

There were no easy answers. What remains of Hurricane Harvey is expected to hit the Bluegrass State starting late Thursday... read more