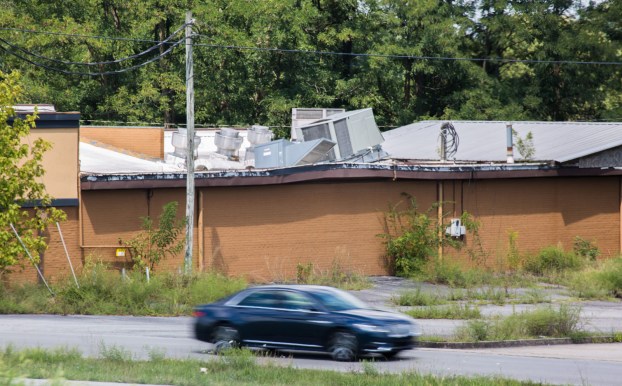 Ben Kleppinger/ben.kleppinger@amnews.com Heating and air units on the roof of the old Sutton’s restaurant building can be seen tilting into a partial roof collapse Aug. 24, 2017. Code Enforcement Officer Tom Broach says there is daylight visible through the roof from inside the building.

Danville is moving forward with a plan to demolish the old Sutton’s restaurant building along the south end of the bypass.

City commissioners voted unanimously this week to advertise for bids to demolish the deteriorating structure. After demolition is complete, the city will attempt to recoup the demolition costs by placing a lien on the property and beginning a foreclosure process, according to Danville City Attorney Stephen Dexter.

The former restaurant has been condemned since June 2016. Heating and ventilation units on top of the building are falling in and Code Enforcement Officer Tom Broach has said the sky is visible through the roof from inside. City officials have said they have received many questions and comments from the public concerning what’s being done about the structure.

Danville Mayor Mike Perros said he wasn’t sure why it had taken the city so long to move forward with demolition plans. The California-based company that owns the building was given an order to demolish the structure within 90 days when the condemnation occurred 14 months ago, he said.

“My question would be next time, do we have to wait this long before we do anything?” Perros asked.

Dexter said the city doesn’t have to wait that long, but the city only has a certain amount of money it budgets for demolition and cleaning up properties. That money isn’t enough to take immediate action on every single property that hits the 90-day mark, he said.

Dexter estimated the demolition of Sutton’s will cost as much as $50,000 — more than half the $90,000 the city budgeted this year for restoring dilapidated properties.

Dexter said “compliance and remediation” are always the goals for city staff before pursuing demolition, in order to find resolutions that don’t cost the city more money.

“This is probably the most expensive demolition that has been done by the city in the recent past,” City Manager Ron Scott said. “And this is in an area that’s having some increased economic activity … so it’s important to have that site cleared and available for future growth.”

The building sits across the bypass from the new Holiday Inn Express that opened in late 2016 and the Cattleman’s Roadhouse restaurant currently under construction and anticipated to open this fall. Land in the area is up for lease and roads in the area are being expanded, possibly to accommodate more development.

Scott said when the building was discussed with members of the Boyle County Industrial Foundation several months ago, they were “excited about cleaning up the eyesore, first of all, sending a better signal to those developments that are underway or coming, as we have with the new steakhouse; and having another opportunity for growth.”

“When I get a parking ticket — which I do — in 30 days, I get a notice that says ‘you haven’t paid this parking ticket and if you don’t pay it by a certain day, then it’s going to be even more,’” Perros said. “So if we can do that for a $5 to $30 parking ticket, we ought to be able to do that for something on this large of a scale.”

“Let me use your example,” Dexter said. “If you don’t pay that bill, after it’s increased, you don’t get your car taken, you don’t get locked up, however, upon the accumulation of multiple fees and multiple tickets, there will come a time where it will come to light. It won’t be 30 days, it won’t be 90 days. But eventually, it will catch up with you. The same is clear here.

“The only way to speed up this process is consistent pressure from this commission to bring certain properties in compliance.”

“I don’t understand that because if our maintenance code says what it says, why is it dependent on the commission?” Perros asked.

“Because you have to initiate the foreclosure proceeding,” Dexter said. “… You do have to initiate any lawsuit from this chamber and you have to be apprised of that. And so, the best maybe not for speed or efficiency but or policy moving forward, it’s imperative that the commission be kept up to date and to make selective opportunities for the finite amount of resources for this particular process.”