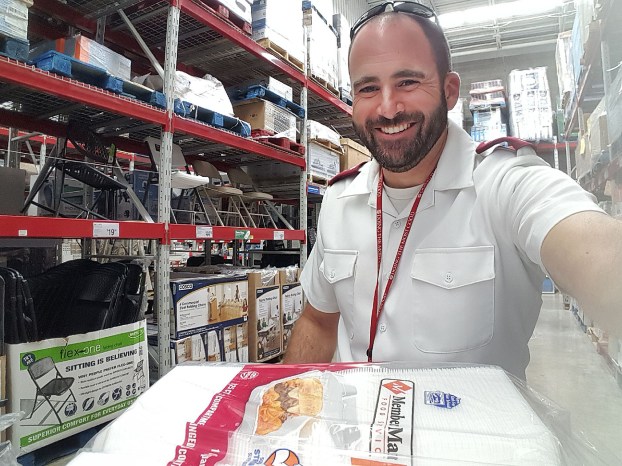 Photo contributed
While shopping for provisions to stock the Salvation Army canteen, Capt. Patrick Richmond snaps a photo. "The need is great here," Richmond said via cell phone Wednesday from a suburb of Houston.

Hurricane Harvey slammed into the coast of Texas Friday night.

On Monday, despite the imminent threat of another devastating assault from Harvey on the coast of Texas and Louisiana, Danville’s Salvation Army Capt. Patrick Richmond loaded up his organization’s mobile feeding canteen with food and water and headed out to help feed victims of the natural disaster.

In a phone interview late Tuesday afternoon while traveling south, Capt. Richmond said he had received orders from the Salvation Army’s divisional headquarters in Tennessee at 5 a.m. Monday, and by 1:30 that afternoon, the local Salvation Army’s canteen — a mobile feeding unit — was packed with food and water and on the road, heading toward Memphis. Originally scheduled to be deployed to Victoria, Texas, Richmond said he found out while traveling Monday the feeding units were to go to Houston instead.

Once he arrived in Memphis, he met seven other canteen units from this region, consisting of 15 officers  —12 men and three women. By about 4:30 p.m. Tuesday, Richmond said they were nearly 190 miles north of Houston.

Richmond said they didn’t know exactly what to expect in the flooded city. But, he said, they had no plans to stop …“When we get there, we’ll hit it and start feeding the hungry. We’re here to meet human need in the name of Jesus Christ.”

They intend not only to feed the victims but to offer some form of love, perhaps in the form of a smile, giving someone a chance for hope under the extreme circumstances.

It was important to the units to start serving food as soon as possible.

Richmond said the units were stocked with tuna fish, spaghetti and meatballs, beef stew and other nourishing foods, as well as 20 cases of water. In total, the eight mobile feeding units took down 120 cases of water.

On Tuesday, Richmond said they hoped to provide quick meals that were also substantial.

The canteen unit is a familiar site in and around Danville. The Salvation Army handed out gallons of free water during Danville’s Halloween event downtown last October. And during the city’s annual Christmas Tree lighting program in front of the courthouse, the canteen unit was there on that chilly evening as they gave away cup after cup of hot chocolate. The Salvation Army also rode in their canteen in the Stanford Christmas parade, then shared hot chocolate with families there.

When asked where the group planned on sleeping in such a chaotic environment, Richmond laughed and said, “Probably in the trucks.” He explained the canteen is a spacious enough kitchen on wheels and seats two people — plenty of room to sleep. As for electricity, they have a gas-powered generator, for which they hoped to find fuel once they arrived. Each of the canteen units has a two-burner stove, sink and microwave — everything except a refrigerator, he said.

By 4 p.m. Wednesday, Richmond said they had just finished serving 250 lunches of tuna fish, ham and turkey sandwiches with chips and handed out more than 800 bottles of water to residents of a low-income apartment complex in the city of Pasadena, located in the eastern area of Houston.

“The need is great here,” Richmond said and described how families of five to eight people are coming to the Salvation Army trucks asking for help.

When talking with Richmond via cell phone, he said he was currently shopping in a Sam’s Club store stocking up on food for Wednesday evening’s meal. Even though the meat and dairy sections were empty in the huge box store, he was filling the buggy with items for the night’s menu of hotdogs with franks and beans. He said they wanted to prepare a hot meal to get the families through the night.

Richmond said several Salvation Army specialty teams from all over the United States work together during disasters and plan out the logistics of what supplies and assistance are needed. A normal deployment to assist in disasters is 14 days, however, Richmond said he wouldn’t be surprised if over the course of the next several months, several 14-day deployments will be necessary for the Salvation Army.

At this point, he said, items are not needed to help the hurricane victims because they don’t have the capacity yet to collect and pass them out. However, monetary donations are especially needed this early in the crisis.

Anyone who wants to donate to the Salvation Army in support of their Hurricane Harvey relief efforts can do so by visiting helpsalvationarmy.org; calling (800) 725-2769; or texting “STORM” to 51555.

Danville is moving forward with a plan to demolish the old Sutton’s restaurant building along the south end of the... read more