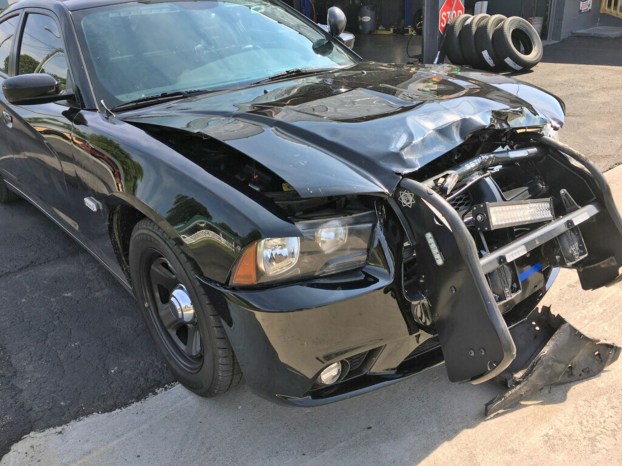 Photo courtesy of the Boyle Sheriff's Office Deputy Cody Cloud rear-ended a vehicle when the driver slammed on his brakes purposefully attempting to disable the cruiser. 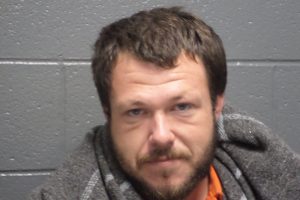 A man was arrested Wednesday evening after stealing a truck, wrecking a police car and leading police on a chase Tuesday afternoon, and evading them for nearly 24 hours.

According to Boyle County Sheriff Derek Robbins, his department was alerted Tuesday that a truck had been stolen from Mercer County and was believed to be in Boyle County.

“He had spray-painted the truck so it wouldn’t be recognized,” Robbins said.

Cocanougher was spotted in the truck in the Junction City area by Deputy Cody Cloud, who began to follow. He was immediately spotted and Cocanougher began to run, Robbins said.

“(Cloud) started to close in and (Cocanougher) just locked the brakes up, so Cody would tear his car up,” Robbins said.

Cloud’s car was badly damaged by striking the back of Cocanougher’s vehicle, but he managed to stay on Cocanougher for about another eight miles as they headed toward Parksville. Other deputies joined the pursuit, along with Parker Hatter, chief of the Perryville Police Department, as they headed into the city, Robbins said.

Cocanougher led deputies into Marion County, then back into Boyle County before he entered a farm. There, deputies lost sight of him and he wrecked the truck into a field.

Robbins said deputies searched until about 11 p.m. for Cocanougher, but were unable to locate him on Tuesday. They returned to the farm on Wednesday morning, but there was no sign of him.

“We got some info that he was in Burgin at his mom’s house,” Robbins said, so deputies went there, along with Mercer County Deputies.

It was around 5 p.m. Wednesday, Robbins said, when deputies located Cocanougher.

“He was taken into custody without trouble,” Robbins said. “It worked out really good.”

Check www.amnews.com for more information regarding the arrest. A mugshot and Cocanougher’s age were not available by press time.