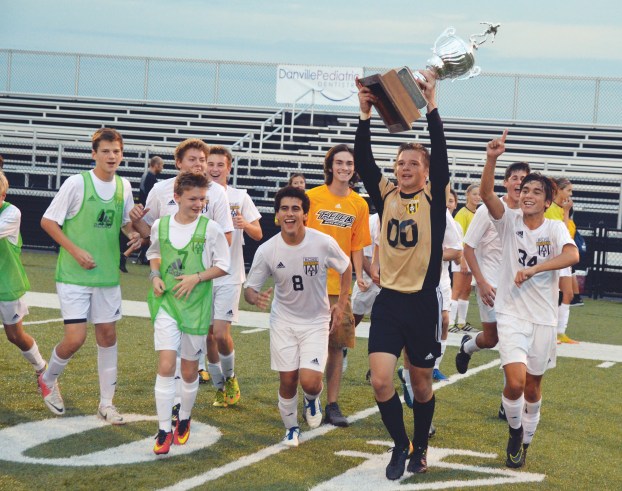 Spreading the field was the key to keeping the Boyle County boys’ streak against Danville alive.

Ryan Henry’s tiebreaking goal with 9:19 remaining was the result of a stronger offensive attack by the Rebels in the second half than in the first, and it was enough to give them a 3-2 victory over Danville in the Constitution Cup at Rebel Stadium.

It was the second goal of the game for Henry, and it gave Boyle its seventh straight victory over Danville and its fifth straight win in the Constitution Cup series.

“Coaches talked to us about playing those through balls, making diagonal runs, and they were working,” Henry said. “We had a lot of opportunities to score at the end because of those diagonal balls.”

Boyle coach Cris McMann said those chances were the result of a change made at halftime.

“We noticed (Danville) would bunch up in the middle on their back line, and we had just kept trying to kick it right up the middle and they would win it. And we said we needed to start getting balls out wide and to the corners and go in from there. I think that helped, and I think Danville just got a little worn out, to be honest,” McMann said.

Danville outshot Boyle 15-9, but the Admirals had an 11-3 advantage at halftime.

Two of Boyle’s three first-half shots resulted in goals, however. Caleb Jackson scored from 20 yards out in the 23rd minute to tie the game at 1-all, and Nik Ruby broke the tie three minutes later with a shot from the left side.

The Admirals had only one shot in the last 14 minutes, and Danville coach Brent Beauman said closing out on offense has been a problem at times this season.

“We’ve had the ball a lot, and it’s the final touches, the final passes, finishing goals. Their age shows in those situations,” Beauman said. “But we had a great practice yesterday … and our fittest kids, our most committed kids are cramping up, so you know they’re giving everything they have. They want to learn and they want to get better, but they’ve just got to get that competitive fire.”

The Boyle County girls haven’t given up a goal to Danville since 2009, and they didn’t come close to allowing... read more