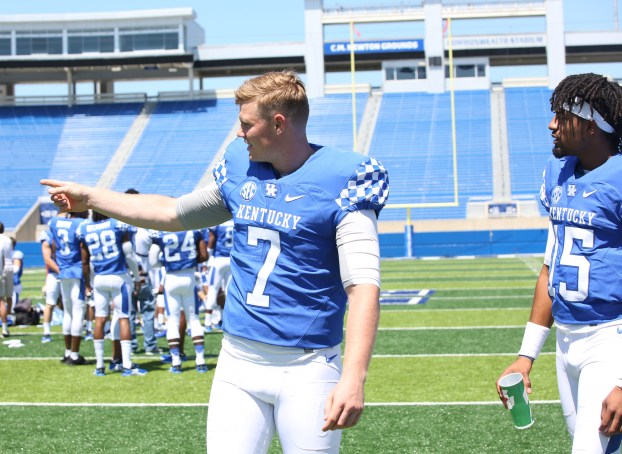 Drew Barker, left, has no problems competing with Stephen Johnson for playing time at quarterback and despite rumors never considered transferring from UK. (Vicky Graff Photo)

Drew Barker not shying away from QB competition at UK

Being part of a quarterback controversy — even if there is not one in his mind — has been part of Drew Barker’s career at Kentucky.

His true freshman year, many thought he might be able to beat out Patrick Towles. Instead he was redshirted. The next season he did play as a backup to Towles before becoming the starter in the final games of a 5-7 season. Last year he finally won the starting job but an offseason back injury eventually took his toll in game three and he was done for the season.

Now going into Saturday’s season-opening game at Southern Mississippi, Barker is listed as No. 2 behind Stephen Johnson. That’s no surprise considering Barker had offseason back surgery and Johnson 7-4 after taking over from Barker.

But what did surprise even Barker — and his parents — was all the offseason speculation that he would transfer rather than compete with Johnson and redshirt freshman Gunnar Hoak for playing time. Barker has earned a degree in three years and could have transferred and playing immediately, but that was never a consideration for him.

“If you are a quarterback, competition is what you sign up for. You love to compete,” Terry Barker, the UK quarterback’s father, said. “It really surprised me when everybody said he was transferring and his days at UK were over. Drew would just laugh at all those remarks.

“He’s not a quitter. Never has been. I would tell him people were thinking he would jump ship and head out, and he couldn’t believe it. He’s out there now having fun, slinging it around and doing really well. His arm and back both feel great. He feels confident he will help and contribute one way or another this year.”

His parents had no idea how much pain the quarterback was in last summer before the season started. They thought he had “tweaked” his back but would be able to play through the pain and keep the starting job.

“The first play of that Florida game did not help when the kid came through untouched and flattened him. Then we saw him go down against New Mexico State and we felt so bad for him because we know how hard he had worked,” Terry Barker said. “We tried to keep his spirits high. He had surgery the day before Thanksgiving and he had to watch the Louisville game at home with us.

“He was really happy for the team that it won but he wanted to be out there with them for that. It was just hard. But he’s done well and he’s happy to be back on the team and getting a chance to play knowing he also has a chance to end his career not only with his degree, but also his Master’s.”

Did you ever wonder how Kentucky senior receiver Garrett “Juice” Johnson got his nickname? I did, so I finally asked Johnson — UK’s top receiver going into this season with 107 career catches for 1,550 yards and nine touchdowns.

“In between high school and UK, I got the name. After my senior season, coming up here, that is how it started,” Johnson said. “I can’t really remember how it started, but once it did it just took off. I love Juice Johnson, too.”

He says sometimes even his mother calls him Juice.

“She slips up and calls me Juice, too, and that makes me laugh,” he said.

It’s a long way from Florida to Kentucky, but Johnson has no regrets about his college choice and says he gets happier every year he’s at UK.

“Everything happens for a reason. I feel like that choice was the right choice and just me coming up here, I have really grown up. It made me be more my own man. Made me become smarter,” he said. “Home is a 14-hour drive away. So it’s just me and maybe a phone call home.

“That takes a little toll on you as a kid but when I call back home the only person I talk to is my mom or dad and they are rooting for me. That makes it easier to have that support back home and they are up here a lot to make sure I have everything I need.”

A.J. Rose excited to get back on the field for Kentucky

By LARRY VAUGHT At this time a year ago, A.J. Rose thought Kentucky had a freshman running back who could... read more