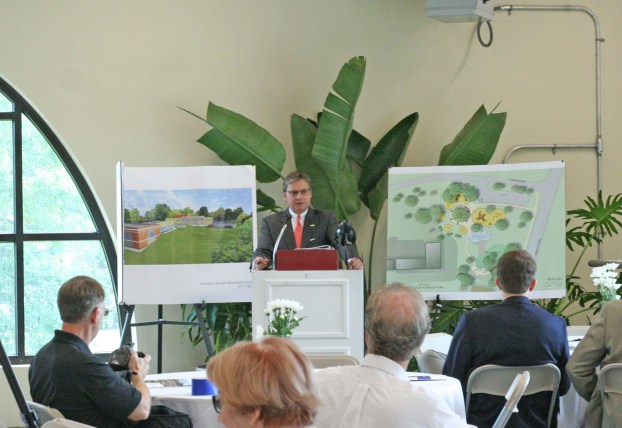 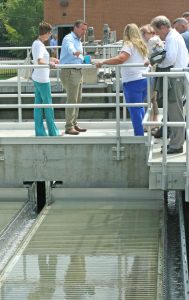 Kendra Peek/kendra.peek@amnews.com
Brent Tippey, vice president of HDR Engineering, the design engineers on the project, takes a group on a tour of the Water Filtration Plant on Thursday.

The $24 million Danville Water Treatment Plant is officially online and open for business.

State, city and county officials and community members gathered Thursday at the facility for the official dedication ceremony, complete with tours of the plant.

“What you see here is nothing short of remarkable,” said Danville Mayor Mike Perros.

The newly completed plant uses the original structure, completed in 1924, along with the the portions completed in 1952, 1957 and 1966. The portions that could no longer be used in their original ways were repurposed, such as the 1924 section, which was used as a filtration area and has now been transformed into labs, office space and a meeting room to be used for trainings.

The plant, Perros said, was never taken offline and service was never interrupted.

City Engineer Earl Coffey said it wasn’t quite as smooth a transition — at one point, he said, they weren’t sure if the plant might have to be taken offline.

“The integration has been a challenge,” Coffey said.

The city was awarded $15 million from the United States Department of Agriculture, office of Rural Development, in the form of a $13.6 million loan and a $1.4 million grant, to complete the water plant.

Normally, said Anthony Hollingsworth from the United States Department of Agriculture, office of Rural Development, cities such as Danville can’t qualify for a grant from their office, however supplying so many neighboring rural areas enabled the city to obtain the money. 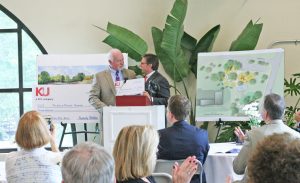 Kendra Peek/kendra.peek@amnews.com
Ralph Bowling, vice president of power production for Kentucky Utilities, right, presents a $20,000 check to Danville Mayor Mike Perros for the new playground to be built in front of the water treatment plant. The playground area will also feature a water garden and be an educational space about water, Perros explained during the dedication. It replaces a previous playground, which was removed so that the plant could be expanded.

The plant will supply water to portions of Boyle, Casey, Garrard, Lincoln, Mercer and Washington counties, totaling 90,000 people through direct or emergency connections, according to information put out by the city.

During the project, the playground that sat in front of the facility was removed; Perros said plans are in the work to replace that, and include a water garden and some educational features.

Other speakers included former Mayor Bernie Hunstad, who started the project six years ago; Donna McNeil, executive director of the Kentucky: Infrastructure Authority; Laura Norris, with the division of water; and Ralph Bowling from Kentucky Utilities, which donated $20,000 to the city for the upcoming park project. 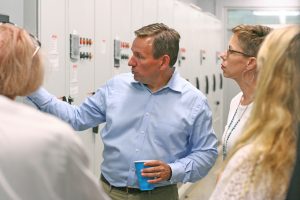 Kendra Peek/kendra.peek@amnews.com
Brent Tippey, vice president of HDR Engineering, the design engineers on the project, takes a group on a tour of the Water Filtration Plant on Thursday, showing some of the electrical components and an ability to observe the water levels in the towers.

Harvey to bring rain to region, potential for flooding in some areas