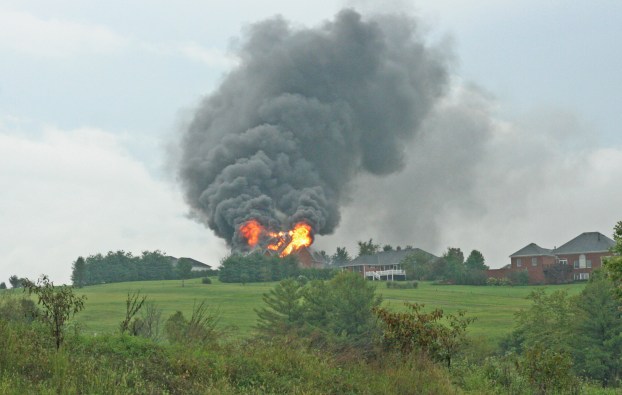 Kendra Peek/kendra.peek@amnews.com A home at 691 Kings Ridge Road in the Old Bridge subdivision north of Danville caught fire Tuesday morning. No one was home at the time of the fire except a dog, Davey, who was saved. 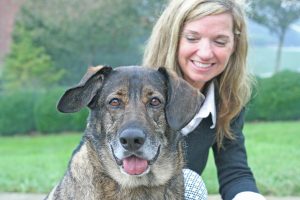 Kendra Peek/kendra.peek@amnews.com
Davey, a three-year-old German Shepherd mix, was rescued from a structure fire at the home of his owners Crystal Cox, pictured, and her husband Dennis.

A Boyle County couple lost their home in the Old Bridge community Tuesday, after a lightning strike started a fire. But they said they’re glad Davey, their three-year-old German Shepherd mix, was saved.

“I pleaded with firefighters, ‘just please get my dog out,’” said Crystal Cox, as she stood in her neighbor’s driveway holding Davey on a leash, watching as firefighters continued to put out hot spots at her home on Kings Ridge Road, north of Danville.

The fire was reported around 11:30 a.m. Tuesday, according to the Boyle County Fire Department.

Crystal Cox said she learned about the fire from her husband, Dennis Cox, who called her after he was alerted. No one was home at the time of the lightning strike.

“(Dennis Cox) told us he didn’t care about the house; he just wanted the dog,” said Boyle County Chief Donnie Sexton. “He said he could build another house; he couldn’t replace his dog.” 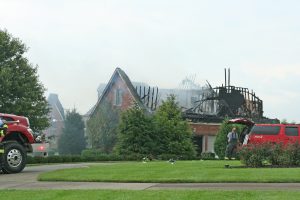 To get the dog, firefighters had to cut into the garage door, which is where the dog was staying while the couple was gone. At first, Davey didn’t want to come to the firefighter attempting his rescue — he’s not fond of strangers, Crystal Cox said. But Sexton said Dennis Cox stood close enough to yell to him and the dog “ran overtop the fireman” to get to his owner.

“There are little dog prints on the back of the coat,” Sexton said. “Little doggy prints right up his fire coat.”

Sexton said a neighbor saw lightning strike the house in the back corner before it caught fire. Other neighbors confirmed hearing a loud sound, like lightning striking, but said they didn’t see anything until the flames appeared sometime later, followed by firetrucks.

“The second floor — that was on fire all the way when we got here,” Sexton said. Firefighters were able to contain the fire there, he said.

Sexton said Dennis Cox had built the house himself, placing steel beams between the second and first floor. That, he said, likely kept the second floor from collapsing. 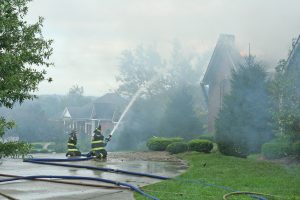 Kendra Peek/kendra.peek@amnews.com
Firefighters aim water at a house on fire in Old Bridge.

“He really did a good job building it,” Sexton said. “I wish we could have saved more of the house, but when you get a house that’s hit by lightning, that big and that severely, it’s a no-win situation.”

The items on the first floor could have smoke and water damage, but might be salvageable, he said. The home will not be livable.

Getting water to the structure was an issue, Sexton said. There’s one hydrant a few houses down, which the department attempted to use, but it didn’t put out the water needed.

“We were using more than we could get, that’s what it amounts to,” he said. “It’s very limited in what it could put out.” It’s a four-inch line; a six- or eight-inch line is better for getting the water out, Sexton said.

“When they put this in, they put four-inch mains in. It’s not big enough,” he said. 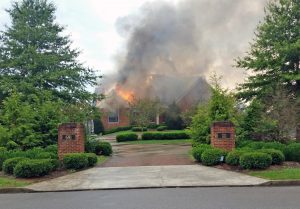 Sometimes, even if the right size lines are put in the subdivision, the lines leading to it are still only four-inch, which produces the same problem, he said.

“Good bunch of guys over there,” Sexton said of the Garrard firefighters.

Two cars were also able to be backed out of the garage after the immediate danger had passed — one, Sexton said, explaining its significance, belonged to Dennis Cox’s late father. Wanda Young, Crystal Cox’s mother, said Dennis Cox had kept the car for many years. She said they were also worried about some photos of the Cox’s sons, who are now in high school and college.

The couple will have a place to stay, said Young, as they can stay with her in Junction City and they also own rental properties around Danville. They’re not concerned, she said, because Davey is OK.

Davy will be four this month, on Sept. 17, Crystal Cox said. Davey has been part of the family since he was three months old when she rescued him from the Lincoln County Animal Shelter. 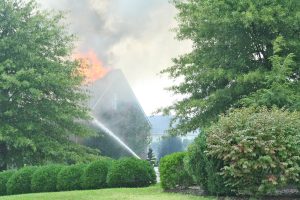 Kendra Peek/kendra.peek@amnews.com
A firefighter aims water at a house on fire in Old Bridge.

As thousands turned their attention to the Danville-Boyle football game Thursday night, a modest crowd of around 60 gathered at... read more