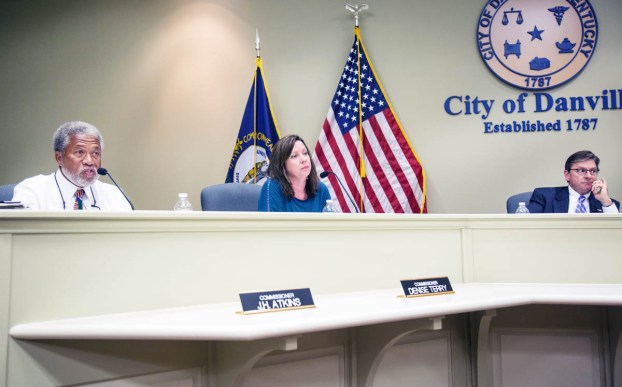 Danville suggests no seats for Junction, Perryville on EDP unless they ‘pay to play’

Danville City Commission has recommended adjustments to proposed new bylaws for the Economic Development Partnership that would not give the cities of Junction City or Perryville seats on the EDP board unless they contribute funding.

Under the draft bylaws currently circulating, Junction City and Perryville would no longer have the right to vote on the economic development board unless they contribute to the EDP’s budget in proportion to their populations. But they would still have non-voting seats on the EDP board.

If adopted by the EDP, Danville’s recommendations would change that.

“I’m not aware of any corporate format that prohibits a sitting director from voting,” Danville City Attorney Stephen Dexter told city commissioners Monday. “In my experience in providing counsel for corporations, I’ve never seen a requirement that strips a director of the right to vote. I’ve not seen an authority that allows the stripping of a director’s right to vote.”

The proposal to remove the two cities from the EDP board entirely unless they “pay to play,” as officials have termed it, was one of several “friendly amendments” Dexter presented to city commissioners. The commissioners voted to submit the suggested revisions to an EDP working group that’s spearheading the bylaws changes.

The EDP is planning to undergo a metamorphosis in the next couple months, recreating its board of directors and refocusing its goals through the adoption of new bylaws. The change is being propelled by the recommendations of a long-term strategic economic development plan completed this year for the Boyle County area by RKG Associates.

The proposed revisions from Danville also suggest that the Boyle County Industrial Foundation should be required to contribute a minimum amount to retain voting privileges.

“Why is it specified that only the governmental entities must invest to have their votes counted?” a comment in the proposed revisions reads. “There isn’t an established giving level for non-governmental contributions for the Industrial Foundation, which could conceivably change in any fiscal year. Private investors must contribute $25,000, but there isn’t any financial requirement of the Industrial Foundation, which may simply be an unintentional omission, but should be included to achieve the goal of having every partner treated equally.”

City commission members said Monday they were also concerned about how the new bylaws define seats on the board for private companies and organizations that donate to the EDP in order to become “Chairman’s Circle” donors. The current proposed bylaws state all Chairman’s Circle donors will work together to choose three people to vote on the EDP board. That’s regardless of how many Chairman’s Circle donors there are (currently, there are three — Centre College, Ephraim McDowell Health and Farmers National Bank).

Commissioner J.H. Atkins said the limit of three Chairman’s Circle seats prevents the public entities such as Danville and Boyle County from having their voice diluted on the board. Danville City Manager Ron Scott noted the limit also keeps the board within a reasonable size so it can be functional.

Dexter said bylaws “are by their nature amendable” and could be altered in the future by the EDP if there was suddenly “a large influx of private investors.”

2017 Constitution 5K/Run for the Arts Promotes Health and Creativity