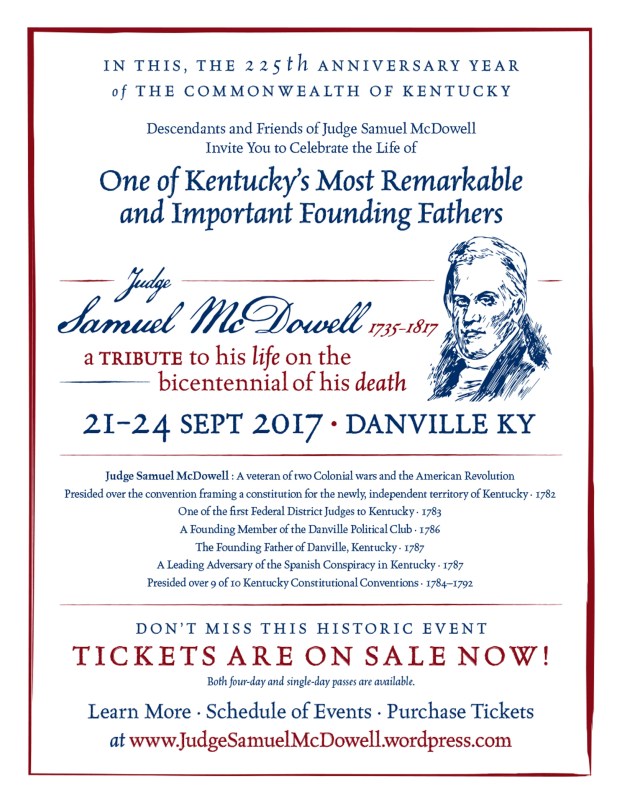 In the city of firsts, another first is slated to happen Sept. 21-24: a celebration of Samuel McDowell and a reunion of his descendants.

“It’s the very first of its kind,” said Tibby McDowell, a descendant of Samuel McDowell.

And the family wants to share it with the public — all events are open to the public. A few are ticketed, but those can be purchased on judgesamuelmcdowell.wordpress.com. Tickets must be purchased before Sept. 15.

The weekend will also be an opportunity for family members to meet, many for the first time.

“There are so many McDowells that have never met,” said Tibby McDowell, from her home in Wyoming.

She had no idea of the history until recently, as she knew little of that side of her family. Through research being done on Ancestry.com, including a McDowell surname DNA project, a few months ago she located a half-brother and a slew of cousins she never knew about.

That also led her to Tim McDowell, a cousin who had been working on the family’s genealogy for some time, including the history of Samuel McDowell.

“I started doing genealogy research about 20 years ago,” he said, sharing that the passion for it came from his father.

Tim McDowell is a direct lineal descendant of Samuel McDowell.

“At some point, I fell in love with him, the person I’ve researched and found him to be,” he said.

• He was a delegate at the Virginia Convention on more than one occasion and present when Patrick Henry gave the impassioned speech, including “Give me liberty, or give me death!”

• He presided over a convention that framed the constitution for the independent territory of Kentucky.

• He was appointed to the district court in Harrodsburg, the first such court in Kentucky; he later moved to Mercer county.

• He was a founding member of the Danville Political Club, hosting events at his home, Pleasantville.

• He was named a trustee of Danville when it was organized.

• He presided over nine of the 10 conventions to draft the first Kentucky Constitution, including the one when the constitution was signed.

• He helped select the first governor and senators for Kentucky.

In honor of the man he was, Tim McDowell said, the descendants felt it was time to pay tribute to the impact he had. This September also marks the 200 anniversary of Samuel McDowell’s death, and this year coincides with the 225 anniversary of the signing of the Kentucky constitution.

“That had a lot to do with it,” Tim McDowell said. “It’s the coming together of a few major events.”

A Facebook group for the descendants has been live for about three years, and they’ve been talking about attempting to get together, he said. They began comparing schedules and realized the crossing of 2017 as a big anniversary of both his death and the constitution, so they felt it was a good year to plan something.

“It’s hard for all of us to believe it’s just a few weeks away,” he said. “It’s been in the works for a long time.”

Another factor, Tim McDowell said, was the state of the gravestone for Samuel and Mary McDowell; 200 years of damage has left its mark on the flat stone that denotes their final resting place in Bellevue Cemetery.

“One of our objectives was to raise money to replace it with a nice, big monument — something he and she were deserving of,” he said.

Within a few months, a GoFundMe was created, aimed at replacing the stone. The amount raised, he said, will enable them to purchase a nearly four-foot-tall monument, with a six-foot wide base.

The stone will feature the names of Samuel and Mary McDowell, along with their dates of birth and death on the front; the back will include a list of his accomplishments.

“It’ll be a beautiful stone. One that’s, not exactly period, but will blend in well with the others,” Tim McDowell said.

A memorial service and grave stone dedication will take place at 9:30 a.m. Saturday, Sept. 23 will feature a bagpiper, people in period dress and the Sons and Daughters of the American Revolution.

Getting to know Samuel McDowell

“Typically, when someone is visible and well-known, it’s normally because someone has taken up the banner for that individual,” said Tim McDowell.

He gave the example of Ephraim McDowell, the most well-known of Samuel McDowell’s sons.

But no one knows much of the father, he said, which they plan to rectify. The goal of the weekend is to “honor, preserve and memorialize Samuel McDowell.”

Beginning on Thursday, Sept. 21, attendees will be welcomed at the Holiday Inn Express from 3-5 p.m. That night, an opening ceremony and dinner will be held at Warrenwood Manor, featuring Danville Mayor Mike Perros as a guest speaker.

On Friday, Sept. 22, historical tours of Constitution Square and Grayson’s Tavern will be given. The original 1792 Constitution and Constitutional Convention Minutes will be available to view. A series of lectures will be hosted from 12:30-5 p.m., regarding the Samuel McDowell and his relatives. The evening comes to close at another ticketed meal, this one at Shelby Manor near Stanford.

After the memorial dedication on Saturday, Sept. 23, a ticketed lunch will be hosted along in Perryville’s Baril Park, followed by a free talk on the McDowells in the Battle of Perryville and tours of the park. More than 56 McDowells were engaged in the conflict on one side or the other, Tim McDowell said. Tour options include a free self-guided tour or a guided group tour.

The night closes with a ticket dinner at the McDowell house in Danville, home of Dr. Ephraim McDowell.

Sunday, Sept. 24 opens with a worship service at the Presbyterian Church, formerly the Concord Church and church home for Samuel and Mary McDowell.

The day and the weekend’s festivities close with a ticketed Continental Breakfast at the Holiday Inn.

Tibby McDowell said she was looking forward to the event. “There’s so much history surrounding this. It’s going to be humongous,” she said.

Tim McDowell said they are grateful for the contributions of local venues, catering and others. “Everybody has been incredible. We already feel welcome and we aren’t even there yet.”

Every event, he stressed, is open to the public.  “It would defeat our purpose if the public didn’t come.”

No plans have yet been made for future memorials, McDowell said, but he believes they will continue.

To learn more about the tribute event for Judge Samuel McDowell, to be held Sept. 21-24, visit judgesamuelmcdowell.wordpress.com.

Tickets are required for some events; the deadline for those events is Sept. 15.

Kendra Peek/kendra.peek@amnews.comDavey, a three-year-old German Shepherd mix, was rescued from a structure fire at the home of his owners Crystal... read more