Question: Jerry, I’m hoping you can tell me something about this little object. My grandfather was in the Merchant Marines before and during World War I and he brought back souvenirs from his travels around the world. These are the three little monkeys who “Hear no evil, see no evil, speak no evil.”

I have no idea what it was for, although in an antique shop I saw a similarly shaped wooden cup that was called a sander, to hold sand for sprinkling on ink to dry it. It is just two and a half inches tall, intricately carved from one piece of stone of some sort. It’s quite heavy.

A friend thought it might be jade, but isn’t jade green? My aunt, who inherited it first, kept a roll of stamps in the cup. I just think it’s cute and I keep my computer thumb drives in it. 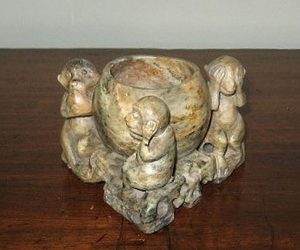 Answer: What a sweet piece you have. Hate to be the bearer of bad news but your antique shop detective work is way off. You have a soap stone match holder.

Sanders are real things, of course, they were infact, little jars with pierced tops to shake out a finely milled sand that would let the ink of freshly written letters dry quickly.

This little match holder is going to date to the early 1900s. The three monkey theme dates back to the 17th century in Japan. They are often called the Three Wise Monkeys or the Three Mystic Apes. They are meant to imbue the person viewing them to be wise in the ways of speech, mind and action. However, in our western culture it can mean to cast a “blind” eye to those who aren’t dealing on the up and up.

Soap stone is a favored stone for carving, because it’s so soft and easy to carve. It doesn’t hurt that is often has beautiful colors and patterns, like yours.

You can always tell jade from soapstone, if in a hidden and very small location, you can gently scratch it with a knife tip or a strong pin and leave a defined line. Jade you won’t be able to do this with. Jade is on the Mohs or hardness scale of a 6 – 7. That is pretty tough and hard to scratch.

Soap stone for a long time was thought to be inferior. But, collectors are beginning to pick it up and prices for very detailed and fine carvings are bringing some real money.

I love this little piece and I would think that at a good antiques show that it would be priced at about $35. Thanks for sharing it with us.

Danville Police are investigating thefts of two trailers overnight Monday night and early Tuesday morning — one of which has... read more