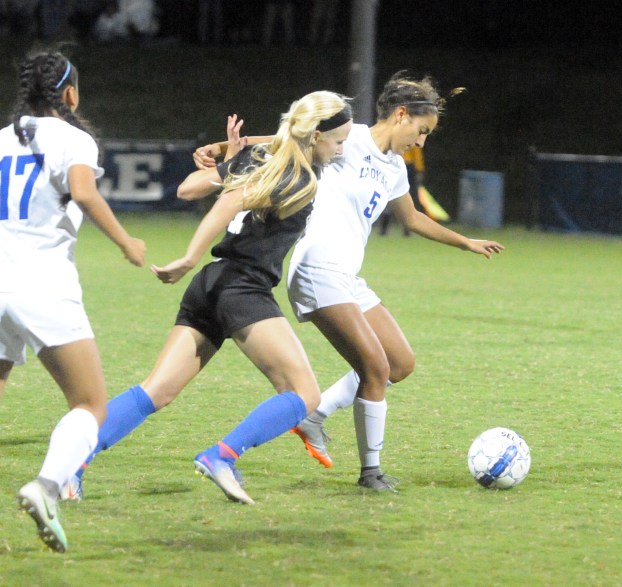 The Admirals held their own for more than 60 minutes of action but the visitors scored three goals in the final 13 minutes to win, 3-0.

“I was proud of my team,” Danville coach JD Smith said. “They played hard. I feel like there were some unlucky circumstances in the game.

The game was physical throughout, with three yellow cards issued — including one foul on Courtney Howe after time expired. But Smith said he was proud of the way his team fought through adversity.

“There was a lot of adversity tonight, and I thought they handled it the best way they could,” Smith said. “They’ve had a very tough first half of the season. I look at games like tonight, it’s nothing on them. I ask them to hold themselves accountable and I don’t know that as a coach, I’m setting the best example if  I don’t hold myself accountable.”

Danville’s defense was stout throughout the game. Defender Zoe Gooch had a pair of goal-line clearances in the first  half, and goalkeeper Grace Gaffney saved a penalty midway through the second half.

“Grace comes up huge for us, night after night,” Smith said. “Right now she’s tied for second in career shutouts at Danville, as a junior. She’s got a good chance of getting it, with just three to go. She’s got 24, 27 is the record.”

Smith was critical of himself after the game but said his players have given their all every night.

“Maybe I’m not doing my best to prepare them, playing so many games, not enough rest days. Because we’ve been going hard. This was game 11 on Sept. 6.

“But I look at it, I think that the girls have done everything I’ve asked them, with the best attitude. Nights like tonight have to fall on me more than them. That’s where it’s at right now.”

Danville’s best opportunities on Wednesday came on the counter, but the Admirals struggled to get shots on target.

LCA finally broke through the Danville defense with 13 minutes left, and it wasn’t an LCA player who scored. The Eagles made a cross into the box that Gaffney parried straight into the path of a Danville defender, who knocked it into the goal.

The Eagles scored their second goal four minutes later on a counter-attack up the right side of the field.

“There were just a couple mistakes, and that’s where LCA’s goals came from,” Smith said. “I’m still not so sure about the last one. But it is what it is.”

The third goal was scored after the ball trickled across the goal line, according to the line judge. Gooch cleared the ball but action was stopped when the head referee conferred with the line judge — who was standing parallel to the 18-yard box — and decided to call it a goal.

Danville sent players forward in the final minutes but couldn’t break the LCA back line.

“As disappointing as it is to not move on, we’re going to rebound. We’ve got a couple days, we’ll have some good recovery sessions that we really need. We’re going to rebound against Lincoln on Tuesday and then I don’t think we have anything else till the 26th. So it’s a good time to get some film sessions in, stuff like that. We’re going to be fine. I couldn’t be happier with how the girls have responded, and I couldn’t be happier with their effort tonight.”

Danville girls were on point from the start Tuesday against Garrard County. The Admirals put five goals past the Golden... read more