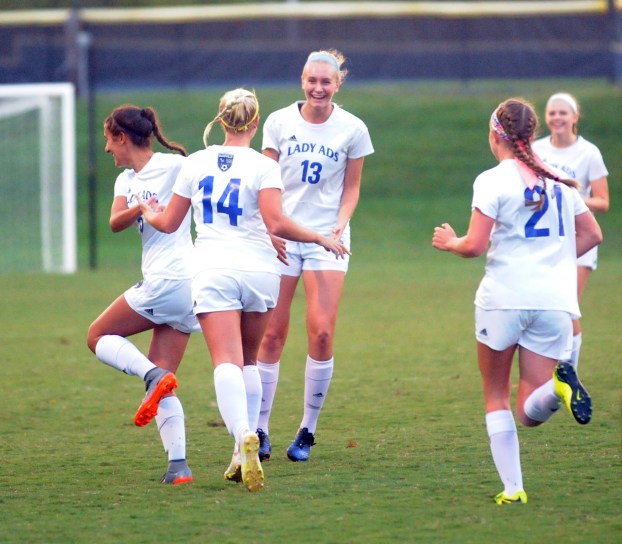 Danville girls were on point from the start Tuesday against Garrard County.

The Admirals put five goals past the Golden Lions in each half en route to a 10-0 victory.

A tough test looms today, though, with Lexington Christian Academy coming to Danville for the Round of 16 in the All-A tournament.

“I feel good. We’ve been playing well and the girls, you want them to be focused and they’re focused,” head coach JD Smith said. “I think that they’re looking forward to (tonight). Right now, they’re just anxious to get started.”

The Danville girls soccer program also reached a milestone Tuesday — Kelsie Steber’s goal in the first half was goal No. 1,000 in program history.

Akers now leads the team with seven goals this season, with Steber and Hibbs each with six each. Nash has five.

“This team, they’re a team,” Smith said. “They want to see each other be successful. At halftime, I made a comment to them, ‘I’ll never complain about you sharing too much … but you’re sharing too much.’ There were times when they’d have a 1-on-1 with the keeper and they’re passing.

“But I can live with those problems. They want to bring others into it and see others have success. It just goes to show that you have a lot of girls who do the right thing. Even when girls outside the starting 11 are in the game, they’re coming off of the bench and they know what to do, they’ve trained for it and they’re ready to step in and contribute.”

Garrard had a big 45th District win last week — a 2-0 win at home against Lincoln County — and coach Joey Parnass said his team have been all ears early in the season.

“We’re a team that is trying to find its way,” Parnass said. “We do have a lot of young talent and they are eager to learn, which is fantastic. The more that they continue to play together and the more that we continue to get a good result — whether it’s learning when we come off of the field or a victory — every single step is a step in the right direction for us.”

“Vanessa Hume, our goalkeeper, she’s been standing out,” Parnass said. “She’s a freshman. She’s been on a roll. She’s playing injured now but she’s held us in every game. Our other star freshman, Marianna Cortez has been doing fantastic for us, leading the way in scoring. Senior leadership, Dylan Twisdale has been great. It’s starting to come together a bit.”

Parnass credited Danville’s skill Tuesday and said he hopes the foundation at Garrard will continue to grow through this season and next.

“As it comes on for this season and next season, we’ve got a very young team,” he said. “We’re predominantely lowerclassmen and we’re only going to lose two seniors. We’ve got a good mix in ratio that will help us the next couple years.

“When you play against a team that’s as skilled as a Danville or Boyle, the lesser teams like Garrard or Lincoln, they have a hard time competing because we really don’t have youth programs to help us out. Hopefully that will be changing next year, so we’ll see if we can start that on the right foot for us.”

Eight players score for Danville in 10-0 win vs. Garrard County