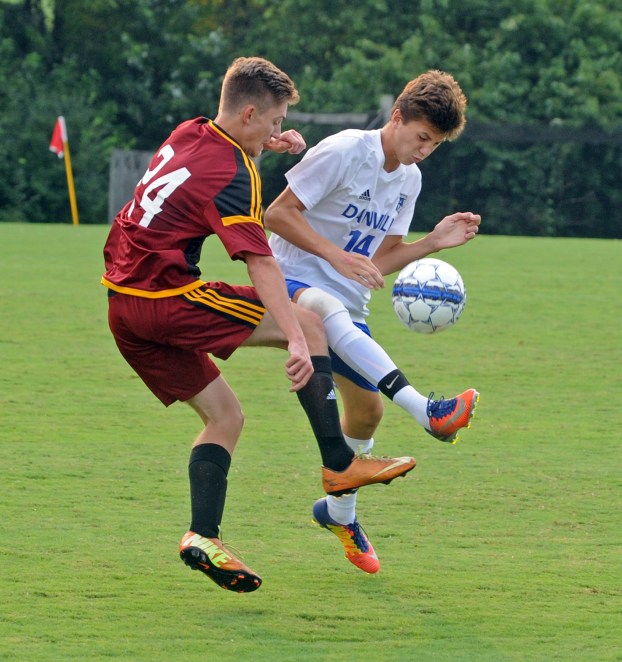 Eight players score for Danville in 10-0 win vs. Garrard County

The Admirals beat Garrard County 10-0 with goals coming from eight different players. Junior Alec McAllister had three goals and one assist to lead the team.

Head coach Brent Beauman said they made a formation switch yesterday in practice and he liked what he saw from it Tuesday.

“It was a really good game. We decided to switch our formation and go a different route,” Beauman said. “It was something we used to do 10 years ago, so we talked about it a lot yesterday. We posted some of our 2007 games on Hudl and said, ‘watch how they play, their intensity, their speed.’ And this team, you can’t say it enough, their willingness to learn and listen and do those things. They came into practice and were so receptive to doing those things. It’s a good thing.”

The switch — from the classic 4-3-3 to a 3-5-2 — will help Danville play with speed across the field. But the Ads took some time Tuesday to find their rhythm with the switch.

“The first half, there were lots of problems with it,” Beauman said. “We kept subbing people out and talked about it, but once they figured it out, the speed that we could play, I think they really liked it. It’s one game, one practice, but I think it’s going to work.

“I’ve played 4-3-3 since 2010, and we’ve done that forever. So going back to two center forwards, their spacing was off, we were widespread at times and we had gaps in the midfield. Our holding mids were either sitting back too much or pushed up too high.”

Beauman noted midfielder Briar Sanders as the key cog in the new formation.

“Briar Sanders, he’s had an incredible year,” Beauman said. “He’s in that holding role, and today, his spacing was a little off, but I told him, ‘you’re just the middle of the wheel. You’re always there for them.’ But his control, his pace, his accuracy is exactly what that position calls for and he does a phenomenal job.”

From there, the floodgates opened. Sanders scored on a corner kick, Sam Lynch scored on a breakaway and Alec McAllister had a first-half hat trick to make it 7-0 at halftime.

“In some ways, we got fortunate at the start of the match,” Garrard head coach Chris Grecco said. “We were holding our own on the scoreboard, but Danville still had a lot of the play and the shots. Then I think we just got tired. They obviously passed the ball very well and they were pulling people through the middle, and we didn’t have people marking up. Then they scored four or five goals, and that was sort of the end of it.”

Grecco’s team has been doing more than holding its own this year. The Golden Lions were winless in 2016 but are 3-4 after Tuesday’s game.

“We knew that we would be better,” Grecco said. “We didn’t graduate any kids last year, we had everybody returning and we have three kids that we’ve added to the team that play club soccer. That’s a big difference for us.”

Those three — Kaden Kimble, Hunter Davis and Shaun Bell — have helped leading scorer Carson Grecco on the score sheet this year, both with goals and assists.

“It was a good night. We had a lot of guys score their first goal, which is awesome,” Beauman said. The guys get excited for each other, that silliness, I hope no one sees that as disrespectful. You want to celebrate and want them to enjoy what we’re doing.”

Both teams were cheering on the sideline, mostly because the starters were out of the game.

“We didn’t have a JV team, so I gave a lot of the guys that don’t get many opportunities to play, put them in, and they actually did pretty well,” coach Grecco said. “It took them another 20 or 30 minutes to score the 10th goal.”

The Admirals have now scored more goals than any other team in the 12th Region.

“We knew that this would be the best team that we have played so far. They’re a good team,” coach Grecco said. “The one thing that they do is they’ll have the ball with their right back and they’ll look to switch the play immediately. We don’t do that yet but we’ll get there. In the final third, teams we can compete against, we want to play a little bit more passing and pass the ball through the middle more often.”