John W. Yerkes was a well-respected gentleman and politician

John Watson Yerkes was a leading citizen in Danville in the late 1800s and early 1900s. The 1877 Centre College graduate was an attorney, politician, educator and promoter of the state of Kentucky during his lifetime, according to articles in the Kentucky Advocate.

In 1900 after the assassination of William J. Goebel, Yerkes made the race for governor and polled upwards of 40,000 more votes than ever before given to a Republican nominee for the office.

But he never got to be governor.

During the special election in 1900, Yerkes lost the race to Democrat John C.W. Beckham of Bardstown.

President William McKinley then appointed Yerkes as Commissioner of Internal Revenue and he moved to Washington. 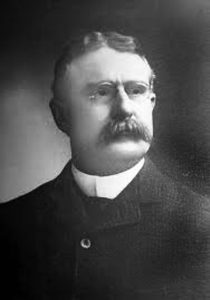 He was a son of the Rev. Stephen Yerkes, minister of the Presbyterian Church, who was born in 1817 in Bucks County, Pennsylvania , and died in 1896 in Danville.

In October 1879, Yerkes and Elizabeth Owsley Anderson, also of Danville, were married. She was the daughter of William C.C. Anderson and Amelia Owsley Rodes. Elizabeth was born in 1854 and died in 1940.

After Yerkes graduated from Centre College in 1876, he received a law degree in 1877 at the University of Michigan.

He returned to Danville to practice law and became prominently identified with the legal, educational, commercial and industrial interests locally and the state.

He was president of First State Commercial and Industrial Convention in Louisville, and was commissioner of Columbian and Atlanta Expositions.

He stayed in Washington and practiced law until 1916 and also was a member of the faculty in the law department at Georgetown University.

After he returned to Danville, Yerkes acted as president of Centre College for a year and served on the college’s Board of Trustees. He also was professor of law at Centre.

After Yerkes died, he was mention in editorials in several Kentucky newspapers and also carried in the The Advocate.

The Courier-Journal called Yerkes the “best type of Kentuckian this state has contributed to official and professional life. He was a man of education and refinement, a lawyer well grounded in the law, a citizen of broad comprehension of the commonwealth’s needs and active for many years in practical efforts to promote its commercial and industrial and educational welfare.”

“The Republican Party lost one of its best men and most able and upright leaders,” the Interior Journal stated. His political prominence began with the election of McKinley as president, and appointing Yerkes as collector of the Internal Revenue for the 8th District in 1897, and to Commissioner of Internal Revenue in 1900, a place he held two terms under McKinley and Roosevelt’s and more than a year under President Taft.

He left the federal service in 1910 and until 1916, practiced law in Washington.

Yerkes was a “man of strong convictions , a vigorous partisan, honestly believed that the salvation of the nation depended on the dominance of the Republican Party and was always and eternally loyal to it.”

“By inheritance, environment, tradition, he was a gentleman. He was in politics, but was never a politician,” according to an article in The Advocate taken from the Louisville Times, the day of his funeral.

“As commissioner of Internal Revenue, he was probably best known, but he was regarded by lawyers as a man learned in the law and by educators as a man highly qualified to assist in guiding the destinies of old Centre.”

100 YEARS AGO — 1917 The citizens of Danville and Boyle County are endeavoring to show their appreciation of the... read more