BURGIN –  Burgin Independent Schools launched their YES Award program this month by recognizing its first recipient, Mike Sanford, Executive Director of the Lake Village Water Association, Inc./ Mercer County Sanitation District, at the August meeting of their Board of Education. He was recognized for his work in overseeing the City of Burgin sanitary sewer project, which will greatly benefit students and the district.

The YES Award was created by new Superintendent Will Begley to recognize the important role community members play in helping students and schools succeed. Awards will be given to staff, students, and community members that exhibit behavior that encourage supportive, positive environments to promote student and school growth and success.

“We are so thankful for the work Mr. Sanford has done to ensure that the community has access to safe, clean, accessible water.” Begley said. “It’s a tremendous asset to our facilities and more importantly, to the safety and prosperity of students.”

The Burgin Independent Schools is a Distinguished public school district in Mercer County, Ky. Committed to the philosophy that students are best served in a small, structured environment, students benefit from a pupil/teacher ratio of approximately 11:1. The district has been recognized by U.S. News & World Report, the Southern Association of Colleges and Schools, and as a High-Performance College and Career Ready district by the Kentucky Department of Education. 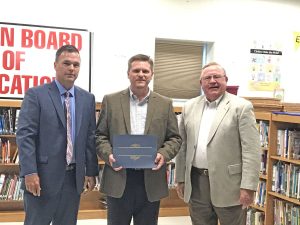 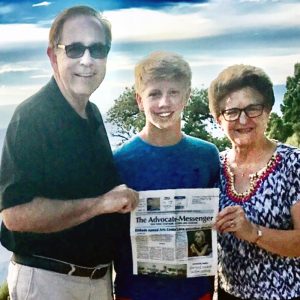 Harry and Alicia Nickens of Danville, accompanied by their grandson, James Carter of Daleville, Virgina, recently visited Sedona, Flagstaff and Grand Canyon, Arizona. They took The Advocate-Messenger with them. 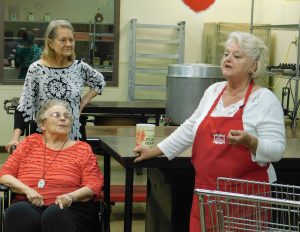 Brenda Mayes and Marcia Kramp, Morning Pointe of Danville residents, loved the trip to Old Kentucky Chocolates and was very interested in hearing what Cheryl Cooper, tour guide, had to say.

Morning Pointe of Danville residents were recently treated to a tasty trip to Old Kentucky Chocolates in Lexington. Tour guide Cheryl Cooper showed the seniors every step of the way through the home of the Old Kentucky Bourbon Chocolates, Derby Mints, Chocolate Thoroughbreds and “Colonel’s Favorite.”

Celebrating its 50th anniversary, Old Kentucky Chocolates has a rich history in Lexington with three locations full of delicious and decadent treasures enjoyed across the Commonwealth. The factory is open year-round, as the sweets attract guests of all ages — not unlike kids in a candy store.

But one can never grow too old to enjoy the classic chocolates and creams. After their tour, the personal care and Alzheimer’s memory care residents stopped by the gift shop, and didn’t leave without chocolate-covered pretzels to enjoy on the bus ride home.