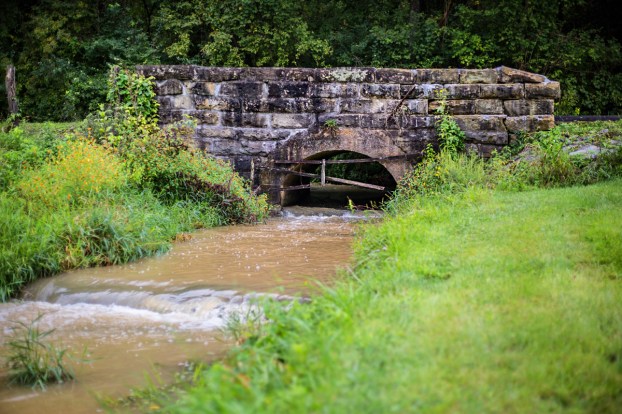 Ben Kleppinger/ben.kleppinger@amnews.com A stone bridge over Chaplin Creek along Old Mitchellsburg Road in the Parksville area is one of the additional points of interest along the circular route in the “Off the Beaten Path” map and guide to Boyle County.

There’s another side to Boyle County that many people don’t know about and never see. While many know about Danville’s various attractions and come to the city for business and entertainment, fewer travel the back roads to see the county’s beautiful rural settings or the farms that generate $17.9 million in economic activity annually.

A newly released map and guide titled “Off the Beaten Path” aims to change that, by directing visitors and Boyle Countians alike to some the county’s hidden gems.

“We wanted to really put people on a few of the other outside roads, so they could get an outside feel of this community, instead of just the old standard roads that you come in on,” said Jacob Pankey, a member of the five-person Leadership Boyle County team that came up with the idea for the guide, then worked with numerous local and regional organizations to make it happen. 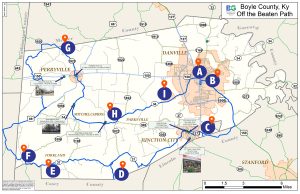 Graphic contributed
The Bluegrass Area Development District created this map for the “Off the Beaten Path” project.

With the exception of using U.S. 150 and Lebanon Road to get out of Danville city limits, the proposed route to reach all of the stops avoids almost entirely the main thoroughfares that cross the county. Additional areas of interest and local businesses, including Mozzybeau Farms in Perryville and Sweets by Cindy and Almost Amish in Junction City, are also highlighted on the guide’s map.

“That’s the point — taking the roads that are less traveled, going ‘off the beaten path,’” Pankey said.

While it’s possible to visit all of the locations in one day, many of them are spots that people probably want to spend some time at enjoying, he said.

“This is a trail that people can return to,” he said. “They can come back to it. They get back on their main roads and travel back home, but then they can come back at another time and complete the path.”

The guides are available at the Convention and Visitors Bureau in Constitution Square and at Wilderness Trail Distillery, another stop on the route. Additional copies may be available at other stops on the route, but supplies are limited, Pankey said.

The guide is the product of a lot of research and studying by the five teammates — Pankey, Paden Tye, Brent Williams, Sarah Daniel and Nick Wade — who decided to do something to promote the agricultural aspects of Boyle County for their Leadership Boyle County project.

Paula Fowler, executive director of the Chamber of Commerce, said the chamber holds a Leadership Boyle County class once every two years. Businesses often sponsor employees to participate, but the program is open to “anybody who lives, works or plays in Boyle County,” she said.

For the 2016-17 LBC class, there were four teams, each of which put together its own project. One is a “kids 3K” fundraising event; one is a project to help teach kids in need life abilities like financial skills; and one is the creation of an alumni network for all the alumni of past LBC classes.

Each LBC class spends one day a month learning in-depth about different aspects of Boyle County, including government, schools, businesses and more.

Fowler said the “Off the Beaten Path” project is a great one that highlights the importance of local agriculture.

“I think this community doesn’t realize how much agriculture impacts our economy,” she said.

Initially, the “Off the Beaten Path” team wanted to come up with a map highlighting farms in Boyle County, because a lot of people don’t realize just how big a deal farming is in the county, Pankey said. They intended to document where all the farms are, but “we discovered there’s a lot more farms in Boyle County than people realize,” he said.

The team traveled to many farms and interviewed farmers, learning about the agricultural side of the county.

Agriculture facts provided by the Boyle County Extension Office and printed on the back of guide list 623 farms in the county, covering almost 93,000 acres.

Those farms produce $4.6 million in cash receipts for crops and $13.3 million for livestock each year, according to the stats.

The team, which like all Leadership Boyle County teams, was tasked with completing a project to “make Boyle County better,” altered its plans for the guide, but kept the focus on promoting agriculture.

“For me, agriculture is not only my passion, but my livelihood,” team member Brent Williams with Burkmann Nutrition said. “So having the opportunity to showcase agriculture in Boyle County was of much interest to me. We have a very active Soil Conservation Office; we have an extremely active Farm Bureau; we have one of the better extension offices in the state; and an active Cattlemen’s Association.”

Team members were assigned different regions of Boyle County, and they went back out to research the best spots to include in a tourism guide. They came back with many more than could fit nicely on a single map, so they had to narrow the list down, Pankey said.

The team enlisted the help of the Bluegrass Area Development District to generate the map, which unfolds to about 17-by-11 inches. They tapped numerous resources for photos, including former Advocate-Messenger reporter Pam Wright for the main cover photo. And they found an organization to pay for the first printing — the Boyle County Soil Conservation District.

“The Conservation District loved the idea and they were willing to sponsor the first run of our brochures,” Pankey said.

Allen Goggin with the Conservation District said the district contributed a small amount of money — “it wasn’t a whole lot” — but the final product “turned out really well.”

“It supports agriculture. It’s something new,” he said. “We really don’t have a brochure out there promoting agriculture like it is.”

Pankey said Minuteman Press in Danville was also helpful with their printing of the guide.

Williams and fellow team member Paden Tye, who works with Blue Moon Insurance, said they hope the guide will help locals who might not venture out of their usual paths much discover parts of their own home county they didn’t know about before.

“Agriculture has huge economic impact on this county. But outside of the agriculture community, (people) don’t know that,” Williams said. “What we’re trying to do is tie those two sectors a little bit more together so we can have more open communication, we can have more mutual respect for both sides, and enjoy the community that we live in together.”

“There’s all kinds of different places that are supporting everybody, but unless you go find it — everybody thinks you have to go to Lexington or Nicholasville,” Tye said. “You don’t. It’s all here. You’ve just got to be willing to support something that’s outside of the city limits and find it.”

Pankey said the team hopes that another organization — or perhaps a future Leadership Boyle County team — will pick up the guide and continue to improve it or print additional runs. Tye said he has told Kentucky Agriculture Commissioner Ryan Quarles about the guide and Quarles is interested in using it as a model for similar products in other counties, where they might be a similar disconnect between the rural and urban populations.

Copies of the “Off the Beaten Path” guide and map to Boyle County are available for free at the Danville-Boyle County Convention and Visitors Bureau in Constitution Square and at Wilderness Trail Distillery on Lebanon Road. Additional copies may be available at other stops on the guide’s route, but supplies are limited. 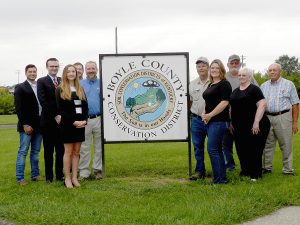