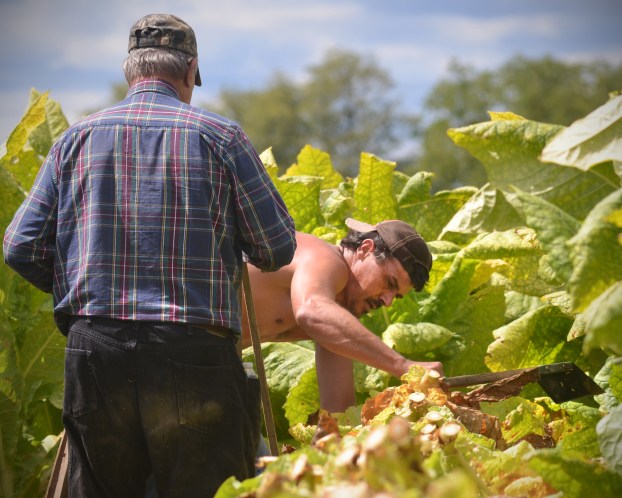 (Photo by James Morris) Alvin Stamper of London, leads the pack at the half-way point during the contest Thursday. Stamper won first place in the competition for the 12th straight year and his 13th time ever.

The sun was shining but the temperatures were relatively cool Thursday for Garrard County’s 36th annual Tobacco Cutting Contest. Contestants moved down rows of tobacco at high speed, completing the physically taxing process of chopping down tobacco stalks and staking them as quickly as possible. The event was held at Paul Ballard Farm and the competitors cut tobacco grown by Greg Hensley. The event was coordinated through the Garrard County Cooperative Extension Office and sponsored by local businesses, which provided the prize amounts. Alvin Stamper won first place for the 12th straight year and his 13th time ever; his prize was $500. Isaias Alejandro was second ($300); Brad Bolton was third ($200); Victor Gonzalez was fourth ($150); Luis Arellano was fifth ($100); and Abel Ramirez was sixth ($50). Awards were also given for Rookie of the Year to Fernando Islas ($200); and Rookie of the Year Runner-Up to Oscar Moralez ($100).
You Might Like