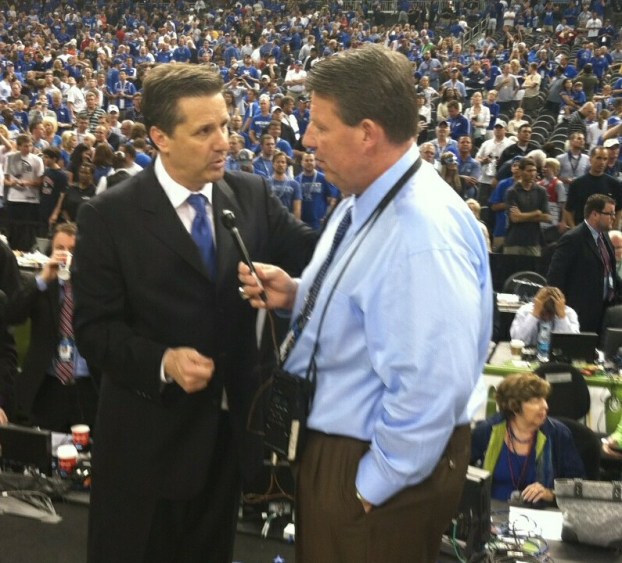 Looking back Tom Leach admits he didn’t “fully appreciate the lottery ticket” he was trying to purchase when he dreamed of becoming the radio voice of University of Kentucky football and basketball game.

He was a 16-year-old high school student in 1977 when he started calling high school sports in Paris. His first full-time radio job was in Mt. Sterling doing Montgomery County game.

Leach, a journalism major at UK, came to Lexington in 1984 and went to work for the UK Radio Network in 1989 as host of the postgame scoreboard and call-in shows. Eight years later he became the play-by-play voice of UK football and then in 2005 he added basketball.

“For two to three years I tried to keep a journal during football season. For football I tried to watch everything going on in practice and read everything I could about the other team. I made lineup boards. There’s not as much game prep for basketball, but there are more games,” Leach said.

It’s impossible for Leach to pick out a favorite game or memory. There have been too many in both sports.

“Those are the big moments you hope you rise to the occasion and do something decent like the (NCAA) championship game in 2012 when Kentucky won. You only have a handful of times things like that happen and that was my chance to get in the club (of announcers who have called a national championship win),” Leach said. “Cawood started doing UK basketball in 1953, did it for 39 years and had two championships. Ralph had a good run with (Rick) Pitino and (Tubby) Smith.”

Leach remembers getting his chance to do UK football because Hacker wanted to only do basketball. He had a one-year contract — knowing that would make it easy for Host Communications to make a change if his work was not good.

“I also knew if I did well, when the basketball job opened I would have a good chance to get it,” Leach said. “I was blessed to come along when Hal Mumme arrived to give the ball to Tim Couch to throw to Craig Yeast and others. The first game they had three touchdowns in the first quarter and were up 21-0 on Louisville. That made my job a lot easier.”

One part that is not nearly as any as many might think comes after the game when he has an interview with the head coach. It doesn’t matter if UK loses or wins, the show has to go on.

Former basketball coach Billy Gillespie presented “challenges” for Leach just like he did others.

“He was a difficult guy to ever get a read on. We actually got along better than it probably sounded. When he found out I was a big horse racing fan, he wanted to talk about racing during breaks. Then we would go back to the interview and I was not sure what it always sounded like,” Leach said.

“Everybody has been pretty good to work with. Cal (John Calipari) has never been a problem to deal with after a loss. Actually he sometimes goes into more depth after a loss than a win. He says he uses media to get messages to players. After a loss he is usually more insightful on what a player did wrong than after a win.”

Leach laughs that there were some “rough times” during UK football coach Mark Stoops’ first two season. Last year’s home loss to Southern Mississippi was “not fun to do” but Stoops handled it well.

Leach said most coaches understand some questions are not fun to answer but that he has a job to do. He said football coaches Rich Brooks, Guy Morris and Mumme were “great” to work with. So was Tubby Smith.

“Hal has some issues with the media but (then UK athletics director) C.M. (Newton) took Hal and I out to lunch when I got hired. I think C.M. putting that together got us off on the right foot. let me sit in on film sessions. He trusted me,” Leach said.

Leach said once he had to do a pregame interview with Mumme while the coach was watching a JV game from the stadium press box. The first segment Mumme spent more time watching football than answering questions.

“I told him, ‘Hal, they tell me we are going to do eight or nine minutes. I can ask 10 questions or 100. But we have a certain amount of time we have to fill, and we are going to fill. He was fine after that,” Leach laughed and said.

Drew Barker not shying away from QB competition at UK

By LARRY VAUGHT Being part of a quarterback controversy — even if there is not one in his mind —... read more