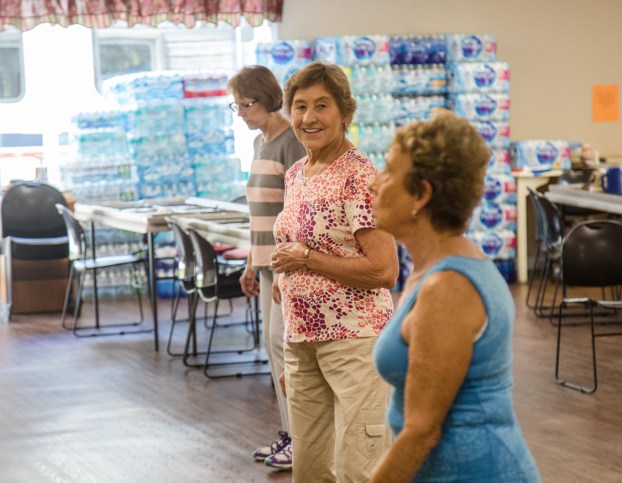 (Ben Kleppinger/ben.kleppinger@amnews.com) Boyle County senior Sue Vogt, center facing camera, dances with the Boot-Scooters, a line-dancing group that meets twice a week, Thursday at the Danville-Boyle County Senior Citizens Center. In the background is a huge stack of bottled water that local senior citizens, including the Boot-Scooters, have helped amass to send to people in Texas dealing with the fallout from Hurricane Harvey.

Hilder, 88, now lives in Boyle County to be near her son, but Houston and Beaumont, Texas, still hold a special place in her heart. She grew up in Beaumont, met her husband there; they moved to Houston and raised two kids in the booming city.

The news of Hurricane Harvey’s impacts leaves her feeling overwhelmed — she said she feels far away from her home.

But Hilder has found comfort in the efforts of local Boyle County senior citizens to gather water for the beleaguered residents of her home state.

Senior citizens who utilize the Danville-Boyle County Senior Citizens Center have gathered nearly 12,000 bottles of water to send to Texas, and they’re not done yet. 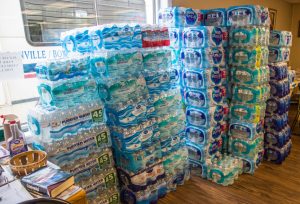 (Ben Kleppinger/ben.kleppinger@amnews.com)
A large number of bottled water bottles have been collected at the Danville-Boyle County Senior Citizens Center for people in Texas affected by Hurricane Harvey. Center Director Ben Guerrant said two more palettes of water have been paid for and are being held at Walmart for the group.

“I think it’s just fantastic,” said Hilder, who doesn’t easily admit that she helped contribute to buy some of the water. “I’m very, very happy about it, because they certainly need it.”

“We loaded an entire U-Haul full and sent that up to Detroit,” he said. “When news started breaking with the destruction associated with Hurricane Harvey, the seniors wanted to do something again. Knowing that water was everywhere except where it needed to be, it was a logical conclusion to do it again.

“That’s something that the seniors came up with and really ran with. They’ve donated bottled water, they’ve donated their own dollars to it, they have gone out and sought donations from other organizations.”

Sue Vogt, 81, said she and Hilder are part of the Boot-Scooters, a group that meets twice a week at the center for line-dancing. The Boot-Scooters contributed $75 to help buy bottled water.

“That felt wonderful,” Vogt said. “We come here and dance and we just put a $1 donation in the basket every time we come, and $1 just mounts up and mounts up.”

Vogt said it has been inspiring to see so many churches, communities and organizations come together in the wake of Harvey to send help to Texas.

“There’s so much evil in this world, but when tragedies happen, like in Houston, you see the goodness of people coming together in that area and all across the country,” she said.

Guerrant said the Boyle seniors are the ones who inspire him.

“What’s great about this group is you’ve got a group of wonderful people that have worked so hard their entire lives, and here they are enjoying their retirement years, but they’ve never lost that sense of community spirit,” he said. “I think it’s just inspiring to the rest of us in the community to follow that example, to see how they respond when there is a need.”

The water collected will be transported to Texas sometime next week, courtesy of Forks of Dix River Baptist Church, which is already traveling with supplies raised by others in the area.

Guerrant said additional donations can be brought to the center — 569 Jean Dr. in Danville — or donors can call the center at (859) 236-2070 and someone will come pick up the water or money.

“In light of what is happening or getting ready to happen in Florida, I imagine we will continue to collect water and get it to Florida if need be,” said Guerrant, referencing Hurricane Irma, a massive Category 5 storm expected to hit the Sunshine State this weekend. “I think it’s a testament to the seniors that they’re willing to think beyond themselves and understand and identify with those that are in need elsewhere.”

Vogt said it’s been a wide coalition of people from throughout the community that have helped gather the water.

“It’s been exciting to watch that mountain grow,” she said, meaning the large wall of water bottles that currently sits in the center’s recreation area.

Vogt said something her granddaughter told her fits perfectly with the group’s mission: “We cannot help everybody. But if everybody will help somebody, then everybody is being helped.”

“If everybody would look out for their neighbor like this, the world would be a better place.”

Donations of bottled water or money to purchase water can be dropped off at the Danville-Boyle County Senior Citizens Center at 569 Jean Dr., Danville. Or donors can call the center at (859) 236-2070 and someone from the center will come pick up donations.

Feeling the burn before BBQ: Leisurely 24-mile bike ride through Harrodsburg comes back for BBQ weekend