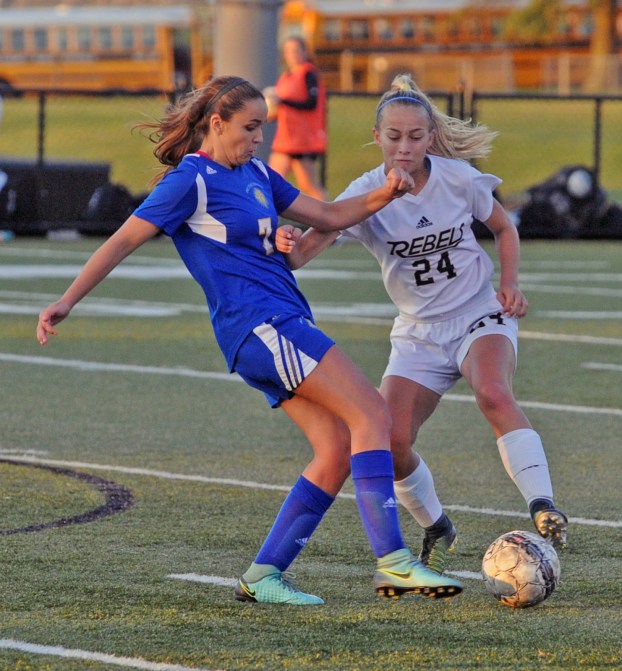 Boyle County’s tough stretch of games continued Thursday at home against No. 16 Bethlehem.

The Rebels, ranked No. 21 in the state by MaherRankings, came out and scored in the first three minutes. It took Bethlehem 72 minutes, but the visitors evened the score 1-1 with five minutes left.

Boyle head coach Brian Deem said he and his coaching staff introduced a new formation in practice on Wednesday and tried it out in Thursday’s contest for the first time.

“I don’t think we coasted, we went to something new tonight,” Deem said. “They’ve literally had one practice doing it. I thought we did really well in the first half.”

Boyle’s goal came when Chelsea Elmore sped to a through ball on the left side and crossed for Abby Carter to poke past the Bethlehem goalkeeper into the net.

But after that goal, it was a battle for midfield supremacy. The Rebels won in the first half, winning headers and controlling possession.

Bethlehem came out in the second half and flipped the script: The Banshees controlled tempo and won headers all over the field.

The defense held strong, however, with heroics from Sarah Burns in goal keeping the Rebels in the lead for much of the game.

Bethlehem finally broke through on a free kick with five minutes left in the game: The kick from near midfield fell into the Boyle box and Bethlehem was the first to the ball.

“We really put a burden on our back line,” Deem said. “Sarah had to be huge tonight just to keep it to a tie. That was the frustrating part for me.”

Deem said he liked the formation switch and said he’ll continue to work with it through the season. Boyle has had a tough road so far -— including a 4-0 defeat Tuesday against No. 2 Sacred Heart —and will play in the prestigious Bulldog Cup hosted by Male next week.

“We made an adjustment with our formation and our style of play a little bit,” he said. “We just want to see if we can stir the mud a little bit and generate a little spark, things of that nature.  We just wanted to switch some things up to give our athletes a little bit more space to operate and work … In a nutshell, we’re definitely moving forward. We had a really tough game on Tuesday and this was another quality team that we had today. It doesn’t get any easier. We go to the Bulldog Cup on Tuesday.”