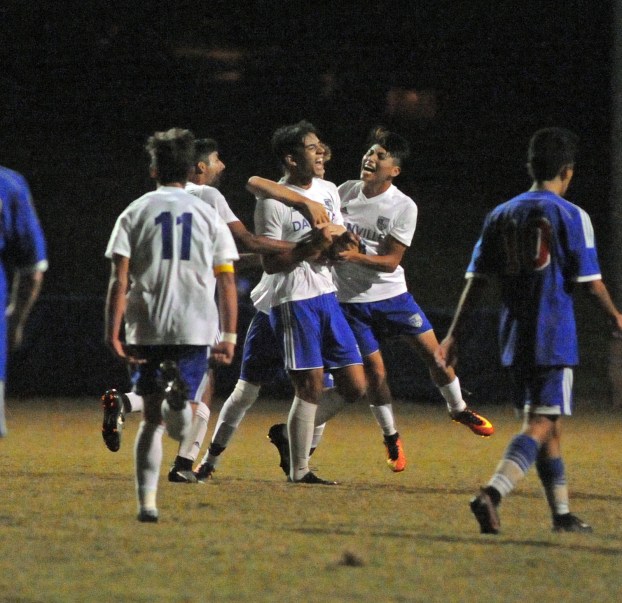 At halftime, Danville and Mercer County were tied 1-1.

The Admirals finished on top, 6-4.

In an extraordinary second half that saw eight goals scored, Danville came back from behind twice to score the final three goals in the win.

Saif Siddiqui scored the opening goal for Danville midway through the first half, and Ads coach Brent Beauman said he was thrilled with the way his team opened the game.

“It was a really good game. The first probably 20, 25 minutes, we did exactly what we were practicing,” Beauman said. “It was really clean and clear.”

But after Siddiqui’s goal, Mercer was quick to respond. The Titans took control of the game and Brandon Ballard scored his 16th goal in just nine games to tie the score 1-1.

“We got the goal and I tell them all the time, ‘first five minutes after any goal, if you score or they score, that’s the time when most goals happen again,’” Beauman said. “So you have to pick up your intensity and be mindful that those transitions happen.

“I don’t think we did that too well and Mercer really took the momentum there at the end of the first half and just kept coming. They’re a very good team and very well coached, Garrett (Stark) is a great coach. You can tell the things they work on and do, and they were doing it well.”

Siddiqui scored again just eight minutes into the second half, but Mercer was again on the front foot after falling behind. Ballard assisted Luke Dean to tie the game and scored again to push Mercer ahead 3-2.

“In the second half, we were just dragging,” Beauman said. “We don’t sub much and we’ve got to find ways to get guys out for a couple of minutes. Having people like Jesus Ayala come in and give us some good minutes. Jesus Gonzalo-Medina came in and gave some great minutes. It was good to have those guys come in. When we go down a guy, it cuts kind of deep.”

Alec McAllister scored with 11:35 to play to tie the game at 3-3, and from there, the floodgates opened.

“I was trying to figure out how to sub and give the guys a rest, because I could just tell that they were dead,” Beauman said. “And then something just changed, maybe when they scored that last one. We caught a second wind, caught fire and we scored. That made them more excited and they just kept scoring.”

Mercer’s Trey Releford  scored with 10 minutes to play, pushing the Titans ahead 4-3.

Siddiqui would complete his hat trick just 40 seconds later. He received the ball in the box on a cross from Angel Alaves, held off a Mercer defender and rifled a shot into the top right corner of the net. Nathan Hazlett had a similar goal just minutes later to put the Ads ahead 5-4.

Both goals were what Beauman called ‘instinct goals’ — Siddiqui and Hazlett didn’t think about getting a better shot, they just found a chance.

“In practice they just drill the ball,” Beauman said. “Sometimes I think they’re just waiting for the perfect opportunity instead of just taking it like those two. It appeared, boom they took it and they scored … I almost think they think too much. They need to be more instinctive. But again, they’re a great group and they work hard.”

With the clock winding down, Danville worked the corner flag and earned throw in after throw in. A long throw from Hayden Block connected with Siddiqui in the box, who flicked the ball into Ayala’s path for a goal.

“Getting those gut goals at the end of the game, it doesn’t have to be pretty, just win the game. That’s definitely how we finished it,” Beauman said.

The Ads’ coach said his team can take the momentum of beating back-to-back 12th Region champion Mercer into the rest of the season.

“I told them, we need to win out. They have the ability,” Beauman said. “I’m super proud of them and if we can do what we need to do, we might see Mercer again in the region. They’re a good team.”

Northern Kentucky has earned a commitment from one of the top basketball players in Kentucky. Mercer County senior Trevon Faulkner... read more