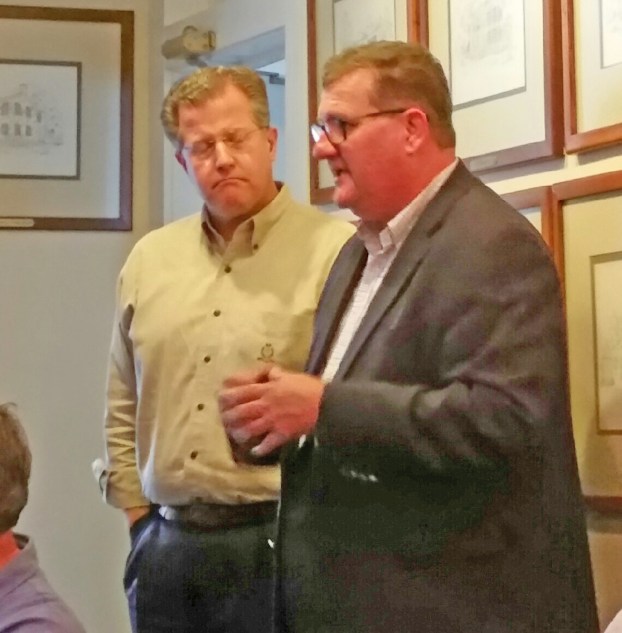 Perryville City Council learned Thursday night that the city will have to pay about $500 to continue participating in the Danville-Boyle County Economic Development Partnership.

“There is going to be a requirement to invest going forward,” said Jody Lassiter president of the Economic Development Partnership. “To date, that has been covered by the Boyle County Fiscal Court.”

Lassiter explained the new recommended EDP bylaws and what Perryville would be required to do in the future to continue having a voice in the partnership if the bylaws pass.

Every public partner would be required to pay a minimum of 67 cents per resident of their jurisdiction in order to have a voting seat on the EDP board. For Perryville, Lassiter said that investment would be about $500, but that the fee would be waived this year.

“We understand that you’ve already made your budget for the year … We’re willing, for this transitional year, to take the IOU and we’ll deal with that later,” he said.

Perryville has never provided funding for the EDP in prior years.

Junction City has also not invested and would be required to pay about $1,500 to keep a voting seat.

Council member Jerry Houck asked what Perryville gets out of “Develop Danville,” the new name the EDP does business under.

He said the EDP did help the city by paying the salary and benefits of the Main Street Perryville executive director. He said he has tried to get some businesses, such as a much-needed grocery store or health care provider, in Perryville.

“They didn’t take,” Lassiter said. “It’s definitely one area we want to pursue.”

He also introduced the council to Hal Goode, the new chief operating officer for the EDP. 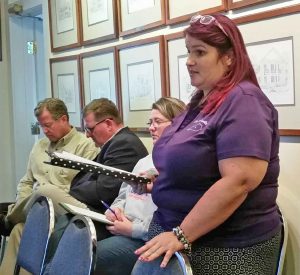 The council also heard from Michelle Gosser, Danville’s chief financial officer, regarding the rising sewer rates, which went into effect on Sept. 1 and will be seen on the bills for November.

Gosser said costs incurred by the city sewer plant and the debt the city had incurred prior to the water plant being bought by the city of Danville were both expenses that have to passed back to the city of Perryville.

“By KRS, we are not allowed to allocate that to other people,” Gosser said. “That’s why your percentage is higher.”

About 400 people in the city have sewer. Gosser said that means those 400 people are incurring the 85-percent increase.

The city of Danville bought the city of Perryville’s water system in 2003, according to archives of The Advocate-Messenger. Gosser said the debt on the system will be paid off in 2040. She said Danville had to assume the debt at the city’s rates.

“You all haven’t done anything since,” said council member Julie Clay. “What is our 85 percent going to do for us?”

“We did catch it, but we didn’t want to raise the water rates and the sewer rates at the same time,” Gosser said.

Others questioned the raises.

“Basically, you’re saying you’re going to increase our rates on the sewer; the water’s already gone up. We’re not going to get any better service,” Houck said. “We have fire hydrants that don’t work. We’ve got leaks that don’t get fixed. What are we getting out of all of this?”

Gosser encouraged them to turn in service requests on the leaks, which Houck said they have done “multiple times” but it doesn’t seem to help.

One leak is on Merchant’s Row and had been called about multiple times, by the owner and by Mayor Anne Sleet, they said.

“You can’t miss it … It’s got a huge, green, grassy patch growing over it,” said Clay.

Sleet said she was told they were on the list.

“It’s hard for people on fixed incomes to absorb that,” said Council member Steve Bailey, who questioned why the raises hadn’t been thought out more.

Clay said they understood state law and that the debt had to be paid.

“We just want you all to do better than once every 16 years,” she said. “We would like increased services. I would like to be able to drop a bill off in town, how about you make that happen?”

When the sale of the water system went through, Clay said, the city of Danville was supposed to cover a portion of the Perryville City clerk’s pay, so that person could accept water bill payments. Instead, she said, that was changed after the acquisition.

Allowing people to pay in Perryville would help the city’s older population, she said.

“Our citizens have no voter recourse to you all … It’s our job to represent the citizens. They feel very frustrated they can’t express their displeasure at the ballot box,” Clay said. “The commissioners make the decision. They can’t do anything about it.”

Houck said the residents who pay the bills need to receive a notice in the mail before the bills come out so that they would know to expect the increased rates.

“People aren’t going to be really happy,” he said. He also pointed out that the city will have to pay an increase on its own water bills.

“(The EDP) is asking $500 to pay to play. (Danville) is going to raise 85 percent the sewer bill,” Houck said. “There goes the $500 we may have been able to scrape together to actually bring some business, we’re going to turn around and pay to Danville.”

Marion Fisher, the man accused of taking a Springfield woman on a wild ride through Boyle County and fleeing police,... read more