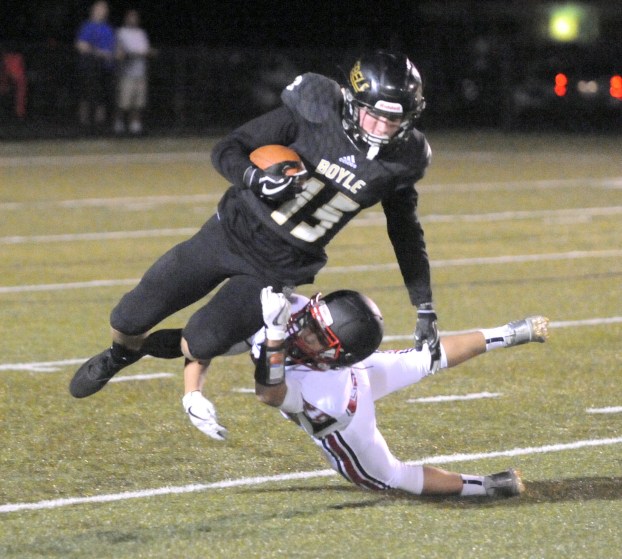 Boyle County head coach Chuck Smith knew at the start of the week that his team had the right mindset.

The Rebels came out strong against the No. 2 team in 4A, walloping Wayne County 38-14 on Friday.

“It was a really good win,” Smith said. “I was really proud of the guys. The really prepared during the week. They came back on Monday and I could tell there was fire in their eyes.”

Boyle lost 10-7 at Danville last week, and Smith said his team knew it could’ve been a different outcome.

“They didn’t like the way that game turned out, they felt like there were things in that game that they could’ve done different after they watched the tape,” the coach said. “Instead of sitting around and talking about it, they came out and proved it every day in practice. They were really ready to play tonight against a really good Wayne County team. They’re a well-coached football team.”

Wayne County was 3-0 entering Friday’s contest, but the Rebels came out with a point to prove on both sides of the ball.

The Cardinals’ first drive of the game resulted in a fumble, recovered by Nick Walker. Their second drive lasted one play —Ezarious Roller intercepted a pass on the 14 yard line.

Boyle would score on a 9-yard pass from Reed Lanter to Walker for the first score of the game.

Wayne evened the score three minutes later on a 30-yard touchdown pass, leaving the score tied 7-7 after one quarter.

But Boyle’s offense continued to move the ball through the air, with Lanter finding Reese Smith for a 27-yard score early in the second quarter.

Landen Bartleson made two game-changing plays later in the quarter: First, a blocked field goal and recovery kept Wayne to seven points. Then, he and teammate Nathan Snyder chased down a 60-yard screen pass by Wayne County to force a turnover: Snyder forced a fumble and Bartleson recovered.

“Nate Snyder made a great play down here,” coach Smith said. “Landen Bartleson did a nice job running the football and made some really nice plays on defense.”

Harrison Mesplay hit a 40-yard field goal as time expired in the first half to put Boyle ahead 17-7.

Crawford would score on the Rebels’ second drive of the third quarter, a four yard run.

The Rebels defense came up big in the third quarter, pushing Wayne back for minus-10 yards rushing. Wayne finished the game with just 22 yards on 25 carries.

But the Cardinals were still a threat through the air, compiling 310 passing yards on 35 attempts.

“Our defense made some big plays,” coach Smith said. “We gave up too much on defense, we’re still struggling on third down for whatever reason. But they did step up and make big plays when they had to, and I was proud of them for that.”

Reiley Colwick scored on a 20-yard interception return for a touchdown to put his team ahead 31-7 after three quarters.

“I thought he had one of the better games he’s played, offensively and defensively. He did a great job, proud of him.”

Colwick had two kick returns for 63 yards and four catches for 32 yards to go with his interception return for a score.

The Reed-Reese combo struck again in the fourth quarter, with Lanter finding his wide receiver for a 64-yard score.

Lanter finished the game 21-for-30 with 265 yards and three scores. Reese Smith was his primary target, catching nine passes for 152 yards and two touchdowns. Walker was next with five catches for 59 yards and a score.

Coach Smith said it’s the zero turnovers that made it a good night for his quarterback.

“No interceptions is the key. That’s what Reed has got to do,” coach Smith said. “He has to make good decisions on the field. We’re not going to ask Reed to win the game for us, but he can’t lose the game either by throwing interceptions. I was real proud of him tonight, I think he wanted to come back and make a statement from last week.”

With the win, Boyle improves to 3-1 on the season. The Rebels travel to Collins next week.

“Tonight was a good start, we’ve got a long way to go, though,” coach Smith said.

Boyle County’s tough stretch of games continued Thursday at home against No. 16 Bethlehem. The Rebels, ranked No. 21 in... read more