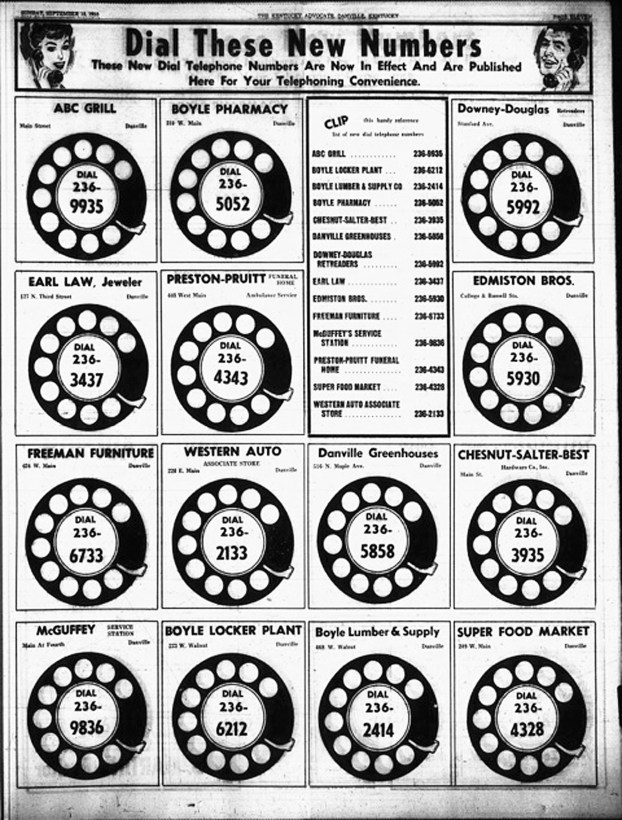 Danville got the latest system of telephone numbers 53 years ago this month when the local Southern Bell exchange was converted to a dial operation.

The “dial service” was announced in May 1959 by T.P. McDonald, Southern Bell manager.

He said local telephone users will have dial instruments, a new numbering system and be equipped to participate in nationwide Direct Distance Dialing program.

Construction on the $2 million project started in May at 222 South Fourth Street, according to J.R. Boyd, district engineer. Hargett Construction Company of Lexington was low bidder on the project for a building to house new equipment.

The new local numbers will have seven numbers rather than a name and five numerals as was previously announced, said McDonald.

Danville was one of the first Southern Bell exchanges in Kentucky to get the new system, called all-number calling.

Dropping the letters from telephone numbers was necessary for Direct Distance Dialing, primarily for three reasons:

• Recently conducted studies indicate all numbered telephone numbers are dialed faster and more accurate and telephones in the future are planned without letters on the dial.

• The dial will give way to buttons on the set the user will punch, rather than dial.

Recent studies on the new system prove people remember numbers more readily than a combination of letters and numbers. Also, these tests prove that fewer errors result by use of all numbers. All numbering will also eliminate confusion between the letters “O” and “I”, and and numbers “0” and “1”.

McDonald reports the new telephone building is being completed on schedule. Equipment is arriving for installation. The over-all job will be completed by the end of September.

Advertisements in the local newspaper asked people to continue to use the old numbers until until September 11 when the new telephone directory numbers were enacted. Examples of how to dial and instructions for customers in Perryville and Junction City also were shown.

Direct Distance Dialing began in 1951 in Englewood, N.J., and since then has spread to various exchanges over the country.

However, the service for the entire country is still years away, said J.S. Holmes, district traffic manager. Only 17 exchanges are in Southern Bell’s nine-state operation and have Direct Distance Dialing.

Users must use a three-digit code to get outside the local area, then dial the telephone number.

With the new system Danville telephone users were able to dial directly into over 900 exchanges and each almost 8 million numbers.

Exchanges in Burgin, Junction City, Perryville and Stanford will convert to the

Direct Dialing service at the same time as Danville and will use Danville’s equipment.

When the service changed locally, 63 percent of Southern Bell customers in Kentucky add the dialing service. 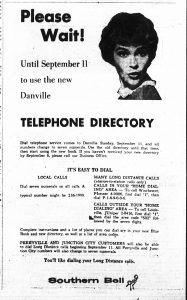 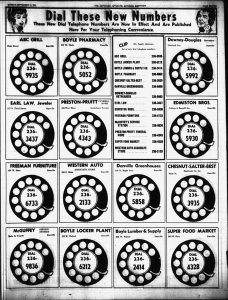 These two advertisements were in The Advocate-Messenger when changes were made in the Southern Bell Telephone system in 1960. Preston-Pruitt Funeral Home is the only business that has continued to operate and also has the same telephone number.

100 YEARS AGO — 1917 The Danville schools have opened and the first day’s attendance was far above the average.... read more