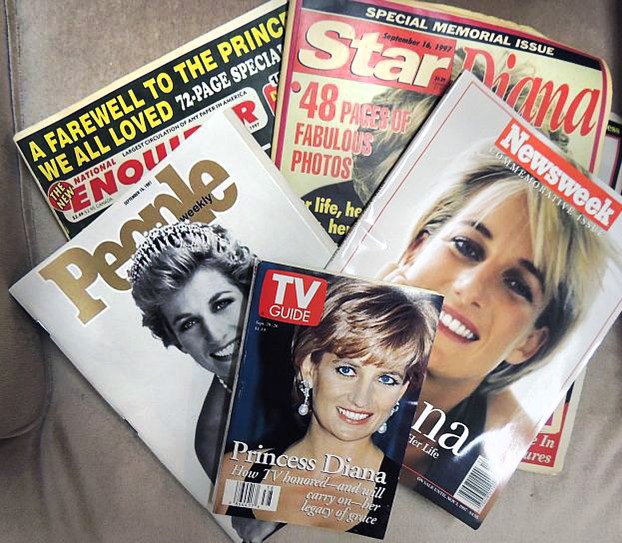 Question: Mr. Sampson, I’m aware that we’re coming up on the 20th anniversary of Princess Dianna’s death. Mother was passionate about Dianna and when she died she and some of her other friends bought copies of I think every magazine that had her picture or story on it.

Mother passed several years ago and I found all of the magazines in her book shelf. Are they worth anything? Should I keep them? Are they going to be an investment? All are in excellent condition. There must be 30 of them. Thank you for your time in answering this. 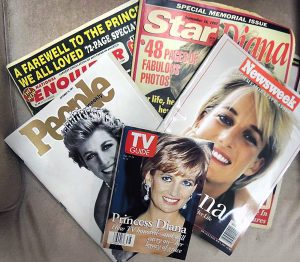 Answer: I can’t believe that its been 20 years since this tragic event. It covered the news for days. And it really touched people, even those who really didn’t care for the royal family.

I remember that just a few days before her death, I’d bought a large collection of Princess Dianna books. They were from some lady off the street. She’d collected for years and was moving and had no room to take them. Dianna died on a Sunday, and the next morning I put those books in the window, and sold every one of them in a matter of hours. Likely to people just like your mother.

People often ask me about these collector editions or commemorative editions. It doesn’t have to be Princess Dianna, it could also be for the assassination of President Kennedy, the Moon landing, the death of John Lennon, Hurricane Katrina and on and on. It’s all about celebrities, pop culture and just famous people. That’s because they sell papers or magazines or books. And sell they do.

Almost too much. Some of these “special” editions might have a printing of tens of thousands or more. And here is rubbing salt into the wound. Everyone keeps them, thinking that one day they will be valuable. And by everyone keeping them and keeping them in mint condition, the market is glutted with examples that every year fewer and fewer people buy.

Not to get into a long diatribe but I don’t think that any of these average antiques or collectibles are ever worthy to be called investments. I see them online and in stores priced for mostly under $5. Tabloids will be less.

Keep them if you like Princess Dianna, if you don’t, then try to move them on. But be warned that there at lots of copies on the market place. Thanks for a great question.

John W. Yerkes was a well-respected gentleman and politician

John Watson Yerkes was a leading citizen in Danville in the late 1800s and early 1900s. The 1877 Centre College graduate... read more