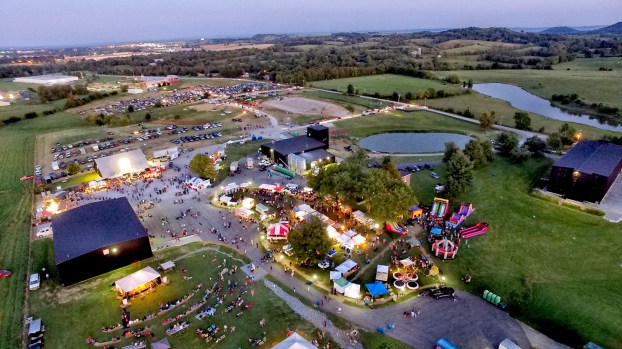 The Kentucky State BBQ Festival attracted “around 27,000-plus” to Wilderness Trail Distillery from Friday to Sunday, said Myrna Miller, an organizer of the festival.

It was the first year for the festival at the distillery, having spent the last six years at Constitution Square Park in downtown Danville. 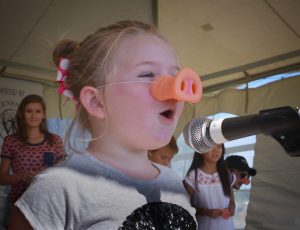 McKenna Quinn Croucher, 4, of Paint Lick lets out her best yell during the Hog Calling Contest at the Kentucky State BBQ Festival in Danville, Sunday evening.

The large number of people headed to the festival created traffic issues at different times, especially on Saturday, Miller said. “That’s one of the things we’ll work on for next year.”

Last year, festival organizers came up with a “guesstimate” of 30,000 people, but that wasn’t based on any hard count of people, Miller said. This year, they had counters at the gate to get a more accurate count, arriving at more than 27,000 when it was all said and done.

“We were worried we might lose people coming out this way but we didn’t — we don’t feel like we did,” she said.

Vendors told festival organizers they did a lot of business — “they probably did their whole weekend’s worth on Saturday,” Miller said.

Attendance at Friday’s VIP event was just about maxed out — Miller said they couldn’t have fit many more people in the distillery for the event without violating fire codes. 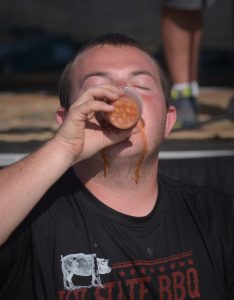 Trent Witt of Danville gulps down a cup of baked beans during the Bean Eating Competition at the Kentucky State BBQ Festival, Sunday evening.

“Even with Martina McBride (performing at the Norton Center) that night, a lot of people came out to our VIP event first and then they were going over to Martina McBride,” Miller said. “Then they came back on Saturday.”

The number of volunteers went up this year, from around 200 in previous years to an estimated 250, Miller said. That’s in part because more were needed to help with parking.

Members of the local Civil Air Patrol chapter helped vehicles park; Boy Scouts helped with cleanup; a Centre sorority helped sell T-shirts; organizations like Atmos Energy and Northpoint Training Center provided volunteers as they have every year — and the list goes on, she said.

Wilderness Trail Distillery was a good host and benefited from the festival as well, Miller said. Tours of the distillery were offered and lines for the tours were always 15-20 people long, she explained. 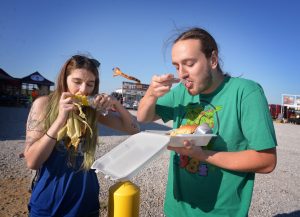 Brittany Shearer of Georgetown and Britton Holman of Lexington eat some of the last of the food Sunday evening at the Kentucky State BBQ Festival. The two said they were late getting to the last day of the event and just managed to find some still-open vendors.

Plans are already in the works to improve the festival grounds further, including paving the gravel roads, Miller said.

“They’re really working toward this being a great venue,” she said.

Attendance on Sunday was low. Miller said she thinks people saw social media posts on Saturday about there being long lines to get in and that discouraged people from coming back out on Sunday.

“I just feel bad for the people who didn’t continue coming, because it was darn good,” she said.

Boyle and Mercer counties are continuing to discuss whether the current interlocal agreement that funds their jail is out-of-balance in... read more