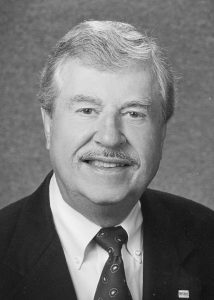 Stuart Powell, 89, of Danville, passed away Saturday, September 9, 2017 at Ephraim McDowell Regional Medical Center in Danville. He was born April 10, 1928 in Perryville, Kentucky to the late Henry and Ethyl Powell.

Stuart is survived by his wife of 67 years, JoAnn Powell of Danville and a daughter, Patti Powell (Vince DiMartino) of Danville.

Stuart graduated from Perryville High School, and attended the University of Kentucky where he was a member of the Marching Band, followed by EKU, where he met his wife to be, JoAnn.

Stuart had many passions, including aviation, which started at the age of 16 with his first solo flight that took off from the airstrip that is now called Stuart Powell Field.

Stuart started working in the car business in the fall of 1949, becoming a Ford dealer himself in 1960 as Powell Motors in Lancaster. He then went on to build the current Ford dealership on the bypass in Danville in 1982.

Stuart has been involved in almost every aspect of community, including serving on the city council and mayor of Lancaster for 10 years, active member of The First Christian Church, past chairman of the board and elder of The First Christian Church, member of the Danville Rotary Club, served as a lifetime member of the advisory board for the Salvation Army, and was the current chairman of the Danville-Boyle County Airport, for the past 49 years.

He received numerous awards and accomplishments over the years, including the 1996 Danville-Boyle County Chamber of Commerce Citizen of the Year, 2002 Ford Excellence in Customer Satisfaction Award, 2003 Danville-Boyle County Chamber of Commerce Business Person of the Year, 2007 General Aviation Board Chairmen of the Year by the Kentucky Department of Aviation, 2008 Time Magazine Quality Dealer Award, 2011 winner of Ford Salute to Dealers Award, 2012 inducted into the KY Aviation Hall of Fame, 2014 Honorary Lifetime Rotary Club member and Harris Fellow, 2015 Salvation Army Lifetime Business Partner in Hope, and 2017 Civil Air Patrol Wartime Service Ribbon and Metal.

Stuart was preceded in death by his parents; a sister, Jeanne Powell Jones, and a daughter, Pamela Ann Powell.