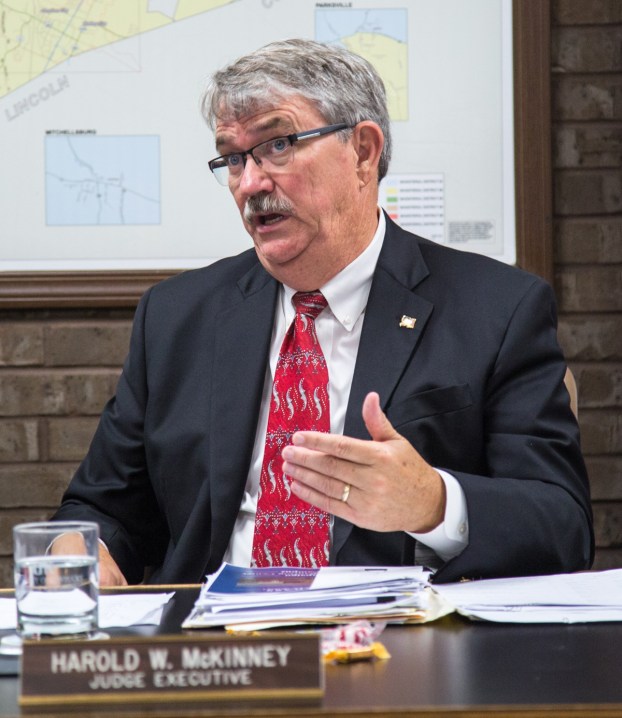 Magistrates are now considering an interlocal agreement that would set up Bluegrass 911 as the emergency call center for Boyle County.

Boyle County Judge-Executive Harold McKinney distributed the proposed interlocal agreement to magistrates on Tuesday. He said the fiscal court could consider and take action on the document at its next meeting, currently set for Sept. 26.

The document states that it would “be in the best interests” of the Garrard, Lincoln and Boyle fiscal courts “from both a practical and financial perspective to jointly operate a single 911 dispatch center.”

Merging of 911 services “will not impair the services being provided to the citizens” of the three counties, the document states.

Boyle County has been pursuing a possible split from the Danville 911 call center for months, leading to many disagreements between the county and city. Boyle County currently holds around $700,000 in 911-earmarked funds that Danville officials have argued can only be spent on the Danville call center. The city and county also disagree over who owns the “public safety answering point” license that allows Danville’s 911 center to operate.

The proposed interlocal agreement states that Bluegrass 911 in Garrard County would become “the initial public safety answering point for all calls originating in Boyle” and the other two counties.

“In the event the City of Danville opts to operate an independent 911 dispatch center, Bluegrass 911 will route calls for Danville City Police and Danville Fire Department to the Danville 911 Center,” the document reads.

The interlocal agreement would also set up a new board of directors for Bluegrass 911, including each county’s judge-executive and two additional appointees from each county, who would be appointed by the fiscal courts.

“All wireless fees collected by the individual counties shall be immediately forwarded to the Bluegrass 911 Board,” the proposed interlocal agreement reads, referring to 911-earmarked funds collected on cell phone bills by the state and then distributed back out to 911 call centers. Danville officials have said they believe the cell-phone funding designated for Boyle County should be coming directly to the city; right now, Boyle County receives the funding from the state and then requires Danville to submit invoices to use the funding for the 911 center.

Paragraph five of the document states the three counties shall split the annual operating costs of Bluegrass 911 three ways. Danville officials have said they believe this arrangement may violate the constitution, because of a prohibition on tax money collected in one jurisdiction being spent on services for another jurisdiction. Due to Danville and Boyle County’s population, it would occupy the majority of Bluegrass 911’s resources, meaning taxpayers in Garrard and Lincoln counties would be paying more than their fair share, essentially subsidizing Boyle County taxpayers, city officials have argued.

Paragraph nine of the proposed document states that any county participating in the agreement can “discontinue its involvement with the Bluegrass 911 Dispatch Center” with 90 days notice.

Danville could be less than a month away from approving relaxed design guidelines that officials say would let the local... read more