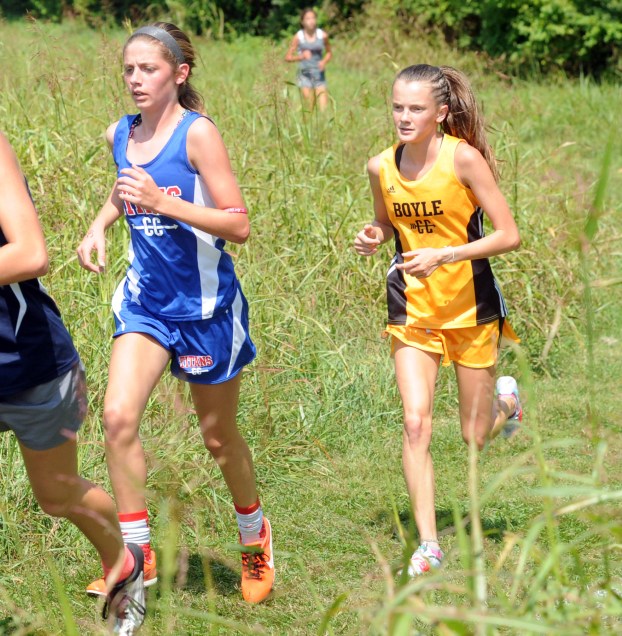 The cross country season was supposed to start last week.

Weather forced teams to wait a week, but Saturday’s weather was perfect for running.

“Considering last Saturday we had to cancel the Henry Clay meet, the ‘world is ending, hurricane after hurricane,’ we couldn’t ask for better cross country weather,” Danville head coach Chris Verhoven said. “It was an awesome meet. You never know what kind of turnout you’ll get, and any time you host a meet, it’s about making money. We want to put out a good product and we hope that we do that, but it’s a fundraiser. When you can attract this many schools and have a perfect day like today, it just helps the program tremendously. We won’t get to host region, it’s not our turn on CKC. Obviously we want to be competitive, but days like today you just hope everyone leaves with a good experience. I think they did today.”

Boyle County was the top team on the girls side, led by Ally Anderson’s second-place finish. She ran a 20:36.

Some Rebels, including Anderson, took the ACT standardized test earlier in the day.

Rebels’ coach Donna Anderson said both Boyle teams are ranked in the single digits for state.

“On the girls side, they’re not deep but they are coming along,” coach Anderson said. “Summer is a senior and she ended up having her best time today on this course. She’s very excited about that because she had struggled for two years. Now she’s having a good year again, that’s fun to see happen.”

Boyle boys were led by newcomer Ezekial Harless, who placed third with an 18:01 time. Malik Allahham, the Rebels’ top returning runner, was out for the Saturday meet.

“I’m excited about the season to come,” coach Anderson said. We did really well with the boys team, and without Malik, who is usually our first-place guy. Even without him, we did well amongst this competition.”

The Rebels had 19 runners in the boys race, a number that has grown in recent years.

“I think part of it is that the momentum builds within friend circles,” coach Anderson said. “They do enjoy themselves at practice, that’s the cross country culture. It’s more laid back than some other sports and I think they enjoy that, and I think they tell their friends. And I think also, everybody can play. Nobody sits on a bench. There’s no playing time, you get out what you put into it.”

Next week, there’s multiple big events, but both Boyle and Danville will trek to Elizabethtown for the “Fairground Frenzy” race.

“It’s supposed to be a flatter course,” coach Anderson said. “There’s three big meets next Saturday and we’ll go to the Greater Louisville Classic at the end of October and I don’t want to go there twice. That’s a flat, fast course. Then we’ll go to the horse park on the first weekend of fall break to get on the state course.”

Verhoven said the turnout on Saturday — plus area athletes coming and performing well — was great to see. Mercer County’s Haley Blevins placed fourth in the girls’ race and Burgin’s Trevor Lay was sixth in the boys’ race.

“There’s a lot of choices out there every week to go to different meets,” Verhoven said. “I know that we’re very selective because you don’t want to go too far if it’s not a high-quality meet or it isn’t a great course. We’re fortunate that we have a great facility and we put on a pretty good meet. I hope local schools continue to come, not only because it’s

Jared Southerland has continued to be one of the state’s best golfers in his senior season. Southerland won an event... read more