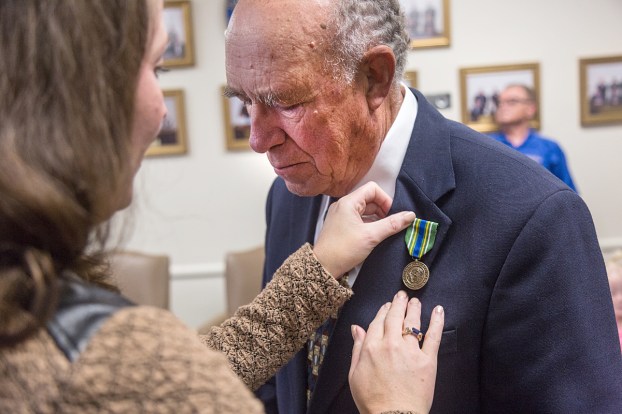 Boyle County Magistrate Phil Sammons is known for telling jokes during fiscal court meetings, but a special event during Tuesday’s meeting served as a reminder of the very serious work he did for his country during the Korean War.

Sammons served in the Eighth U.S. Army based out of South Korea from February 1961 until June 1962. Members of the military who served in Korea are eligible for service medals, but Sammons never received his.

That’s because Sammons’ record of service was among the millions of military records lost in the massive National Personnel Records Center fire in St. Louis in 1973, Magistrate Jack Hendricks said. 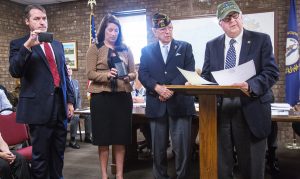 But that wasn’t the end of the story. On Tuesday, fellow veterans Hendricks and Magistrate John Caywood presented Sammons with the three medals he earned more than half a century ago. Kentucky Secretary of State Alison Grimes, who Hendricks said was instrumental in securing the medals, also attended and helped pin medals to Sammons breast. 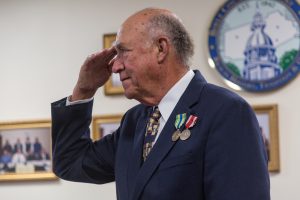 “Usually I have a lot to say, but you guys have caught me speechless today,” Sammons said after receiving the medals during a surprise ceremony at the end of the regular fiscal court meeting. “Jack, you don’t know how much I appreciate you and John. Thank you so much. … I’ll be indebted to you and John for the rest of my life.”

It was no simple task to get the medals — Hendricks said it took him nearly a year and a half working behind-the-scenes without Sammons’ knowledge to make it happen.

“They don’t hand these out just because somebody says that he earned it, he needs it, he ought to get it,” Hendricks said prior to the meeting.

Without Sammons’ original service record, Hendricks had to get a direct family member to request a review of the case. He enlisted Sammons’ son, Darren, to make that request.

Then, Hendricks went to work drawing necessary info out of Sammons — his serial number, his dates of service and more. 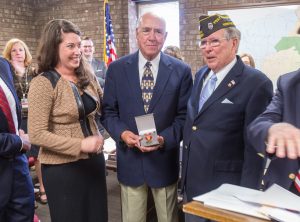 Ben Kleppinger/ben.kleppinger@amnews.com
Boyle County Magistrate Phil Sammons, center, was presented with three medals for his military service during Tuesday’s fiscal court meeting. The medals hadn’t previously been awarded because Sammons’ record of service was among millions of records lost in a fire in 1973. Fellow magistrate and military veteran Jack Hendricks, right, spent almost a year and a half collecting enough evidence of Sammons’ service to get the medals issued. Kentucky Secretary of State Alison Grimes, left, helped Hendricks secure the medals, along with U.S. Rep. John Yarmouth.

“A lot of it, I would just kind of pull it out of him when we would have a cup of coffee at McDonald’s,” Hendricks said. “Like, ‘when were you in Korea? I know you were there; I was in Germany at such-and-such. So we’d get to talking and he’d give me the dates … all this took time to do this to keep him from knowing what I was doing.”

Hendricks said one day, he commented to Sammons, “I bet you’re the kind of guy who remembers his serial number” and proceeded to rattle off his own. Sammons responded in kind.

“Well, I was writing it down and he didn’t notice,” Hendricks said.

Hendricks had help from Grimes, who got U.S. Rep. John Yarmuth involved. It was Yarmuth who served as the connection to the federal government, Hendricks said.

Another piece of the puzzle fell into place when Hendricks got Sammons to give him photos of when he served in Korea, under the guise of getting him admitted into the local Veterans of Foreign Wars chapter. Hendricks then sent the photos off to the commander of the Eighth U.S. Army in South Korea, who had his historian examine them.

Chu Un Chong, public affairs specialist for the Eighth Army, wrote back to Hendricks on Oct. 25, 2016, that the historian had verified that the vehicle number on a truck in one of the photos of Sammons proved the photo was taken in South Korea in 1961.

Finally, Hendricks was able to compile all of the info and send it to Grimes, onto Yarmuth, who sent it on to the National Personnel Records Center, which then passed it on to the Pentagon.

“They approved it at that point,” Hendricks said.

One final delay came when the Korean Defense Medal got lost in the mail twice.

“We ended up having to wait an extra two or three months to get it all redone again,” he said.

The presentation of Sammons’ medals was not on Tuesday’s agenda — Hendricks saved it for the very end of “other business,” at which point, members of Sammons’ family, along with Grimes, entered the courtroom.

“Oh my God,” Sammons said as his family entered and his granddaughter, 2-year-old Kira, ran over to him. “Well lookie here — what a shock. Oh my goodness.”

Hendricks then introduced Grimes and announced that “by order of the Secretary of State, we’re going to reinstate Lt. John Caywood for this presentation.”

Caywood, who had slipped out of the courtroom a few minutes earlier, re-entered the room wearing a green Vietnam veterans hat and addressed Sammons.

“Magistrate Sammons, what are you supposed to do when an officer comes in the room?” Caywood ribbed Sammons.

“You stand and come to attention,” Sammons said.

“And do you holler?” Caywood asked.

“Where’d you get your training, Fort Wimpy?” Caywood joked to loud laughs from the room. “If you wasn’t so old, I’d have you drop and give me 20 right now.”

After some more laughter, Caywood began the presentation.

“You and your family have sacrificed for this country and answered its battle cry,” Caywood said. “… You have given your heart and your soul and even offered your life, while never looking for anything in return. … Today we honor a brave solider, Specialist Phil Sammons, United States Army.”

Caywood and Grimes presented Sammons with the National Defense Medal. After they also presented the Korean Defense Medal, Hendricks explained that medal’s significance.

“Korea, as you know, today is one of the most dangerous places in the world,” he said. “In Korea, during Specialist Sammons’ service, it was just as dangerous then. In fact from 1966 to 1969 — most people don’t know this — there were 92 service members killed in that three-year period by North Korean commandos. … So that was a very dangerous area to be in at any time since 1950.”

Finally, Caywood presented Sammons with the Good Conduct Medal — but not without some playful ribbing.

“To show that we live in a very forgiving country, I’m proud to present to you the Army Good Conduct Medal,” Caywood said to another round of laughter. “Lord, I could lose my commission over this one.”

“They didn’t know everything, did they?” Sammons joked.

“They couldn’t get anybody to sign this one,” Caywood responded, generating more laughs.

Grimes took a moment to address Sammons and the room, noting she had no idea when Hendricks first came to her that it would take a year and a half to secure the medals.

“You have been just as every bit a hero as you’ve been to Boyle County to this nation,” she said. “To be able to be here today to honor you, not only with your colleagues and peers, but with family and friends and members of this community is a great honor.

Sammons said he was grateful for all the people who worked to get the medals and showed up to see them presented. And he finished by addressing Hendricks and Caywood — with a joke.

“You’re dear friends,” he said. “But I don’t believe I would have spent that much time on you.” 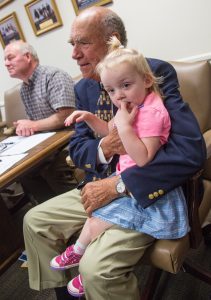 Danville’s downtown businesses are taking action to help businesses affected by Hurricane Harvey by donating a portion of their sales... read more