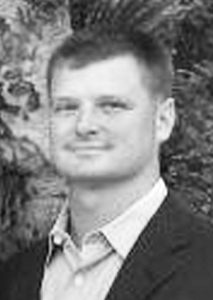 Gregory K. Ballard, 45, of Danville, died Monday, September 4, 2017. He was born in Evansville, Indiana on April 1, 1972 to Ronald B. Ballard and Yvonne Campbell Smothers.

Greg was a 1990 graduate of Danville High School. He served 4 years in the United States Air Force and was honored during his service as Airman of the Year. He served on the Honor Guard at Langley Air Force Base. He was deployed to South Korea where he served with the Honor Guard as well. In 1998, he was the co-founder of Digital on Demand, Inc., a local and regional satellite sales and service provider. Digital on Demand, Inc. was recognized by Dish Network as a Top 100 Dish Network national retailer multiple years. In 2005, Greg successfully transitioned the business from satellite sales and service into KyWimax, a regional wireless internet provider, and continued in his role as owner and CEO.

Graveside service will be 2:30 p.m., Wednesday at Camp Nelson National Cemetery with military honors provided by the United States Air Force and American Legion Post #18. A Celebration of Life will be held Saturday, September 16, 2017 at 2 p.m. at Pioneer Playhouse with Remembrance Time at 5 p.m. Memorial donations are suggested to Hooves of Hope or Wilderness Trace Child Development Center. www.stithcares.com