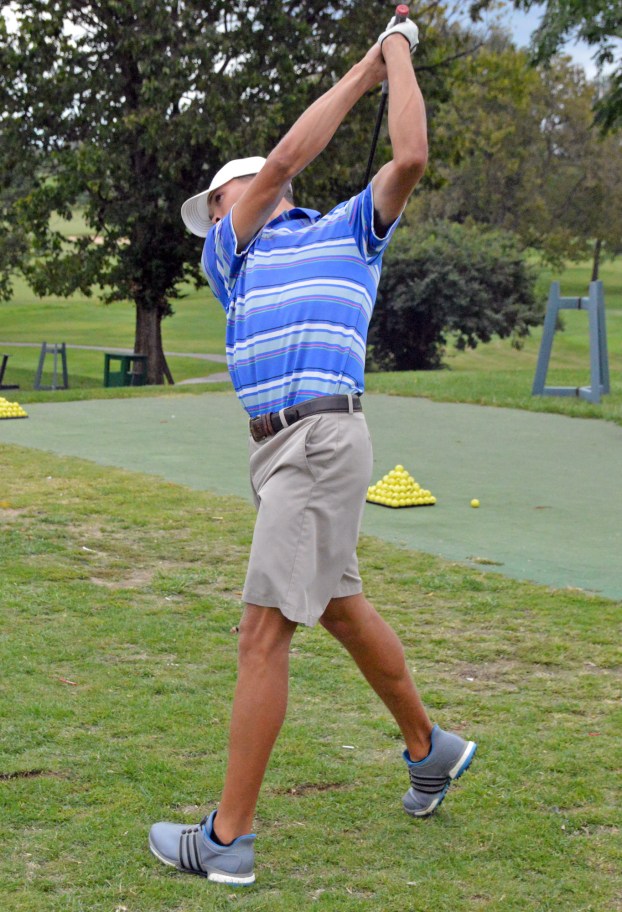 Jared Southerland has continued to be one of the state’s best golfers in his senior season.

Southerland won an event to start the season at Persimmon Ridge Golf Course in Shelby County and currently sits 11th in the state Golfer of the Year rankings, but those rankings were prior to the All-A tournament last weekend. He’ll likely move into the top 10 after a 4-over par performance there.

After nine events this season, his goal is simple: First Team All-State.

He’s close to that mark now and will have another test this weekend at a conference tournament at Tates Creek. His key? Focus.

“Right now it’s about staying completely focused throughout the round, not getting ahead of myself,” Southerland said. “For instance twice this year, I’ve been 4-under with less than the back nine to play. One time I was 4-under and finished plus-3. Another time I finished even. I’ve had so many chances, it’s just when I get to thinking, ‘I just need to birdie this one and this one,’ I need to just keep playing the shot I’m on. It’s more mental than anything.”

One of those events was the Kentucky Invitational, where Southerland said he missed a short putt to put him in the lead.

“I was confident and then I started thinking about it and I pulled it, it didn’t even touch the hole,” Southerland said. “It’s kind of heartbreaking, but what can you do?”

For Southerland, the answer is to hit thousands of golf balls on the driving range. He prefers time on the range to time on the course.

“I’m out here every day,” he said. “My friends, they always get on me because I hit too many range balls. But I’m not hearing it. They always want me to go out and play on the course with them, but I feel like I get better, more practice here than on the course. I just put my headphones in, I have my thoughts to myself. I can get away.”

The one person who has seen Jared play more golf than anyone is his father, Dewayne. Dewayne has stepped in again this year as Danville’s golf coach — Jared and eighth-grader Braylon Emerson the only two on the team.

“I like it. I can talk to him, he knows my game just as well as I do,” Jared said. “When I’m in a predicament, wondering what club to use, he’s there. My dad has never missed a golf tournament that I’ve played in, and I’ve been playing in tournaments since like fifth grade.”

Jared’s dedication over the years has colleges enquiring — he’s had the most contact with Keiser University in Fort Lauderdale, Florida. He said he’s talked with the University of Louisville as well as Arkansas State and Alabama State.

He said he knows it’d be challenging, playing golf in college. But it’s something he’s really considering.

“I mean, it would be a good way to get college paid for,” Jared said. “I know it’d be hard, being a student-athlete in general. But it all depends on what kind of money, things like that.”

Good showings at region and state will help Jared — not just with college, but with his goal of making First Team All-State.

Last year, he made the state tournament after placing second overall — by three strokes — in the region to Cooper Parks from Taylor County.

Because Parks and Taylor County won the region, Jared was the top individual qualifier from Region 4 at the state tournament.

This year, Jared hopes to grab that top spot.

““This year, I’ve beaten Cooper a couple times,” Jared said. “But I don’t know, it’ll be interesting. I just hope we don’t go into a playoff or something, I’d be shaking so bad. He’s just a natural talent, he’s so good.”

Parks placed tied for sixth at the state tournament last year. Jared was one stroke away from him after one round, but a 10-over second round placed him tied for 27th overall.

Playing a full 18 holes and playing each shot is what will separate him this season, Jared said.

“Cooper, he’s one of the best in the state,” he said. “(Last region tournament) I played really bad in the front nine, I shot a 40. On the back, I shot a 33. I just need to put two nines together.”