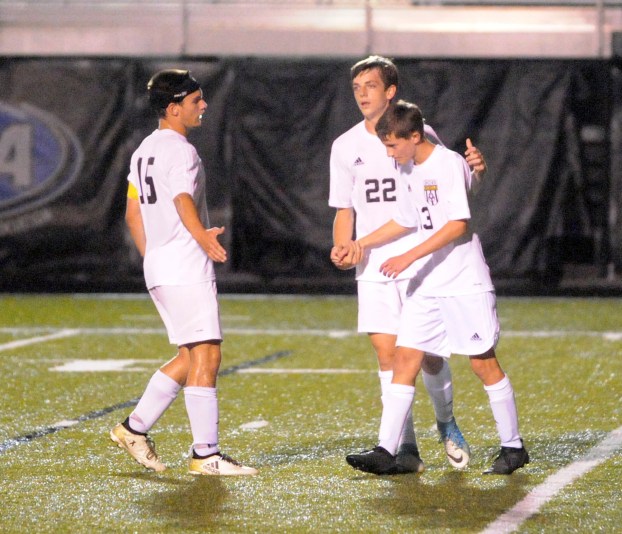 Boyle County seniors have stepped up this season.

The Rebels beat Franklin County 4-2 Thursday to improve to 7-4-1 on the season, with senior Ryan Henry on the score sheet again.

But freshman Caden Ferrell was the lead man on the box score, scoring two goals on four shots in the Boyle victory.

Ferrell got off the mark twice in the first half — first on a through-ball from Sergio Mercado and the second 10 minutes later, when Hunter Baltazar crossed and Henry headed the ball into Ferrell’s path for a goal.

“He’s a freshman. I’m thinking he’s going to score a lot of goals here at Boyle,” head coach Cris McMann said. “He’s just very talented technically. He’s a freshman, he’s getting knocked around a little bit now but when he gets older and bigger, it’s going to be very difficult for other teams to deal with him.”

Franklin County scored its first goal with just 70 seconds left in the first half. Boyle goalkeeper was just inches away from clearing a ball but Julio Quevedo got the first touch for a headed goal.

Franklin was the first team out of the gate in the second half, with a wondergoal from forward Justin Castillo, who hit an outside of the foot shot from 18 yards away that hit the bottom of the crossbar and bounced in.

McMann said that when his team stays relaxed, the results come.

“I think we need to play faster and we have to be able to maintain that possession-style of play for longer periods of time,” McMann said. “We can’t panic when the other team scores. We’ve got to stay focused and keep doing our jobs.”

After the Flyers’ second goal, the Rebels refocused and made plays in the midfield.

“At halftime, we felt like we were playing well, but we were starting to play long balls,” McMann said. “We asked them to possess more, and I think we did. It took us a little while to calm down in the second half, but when we did, we scored two more goals.”

The third Boyle goal of the game came with 17 minutes left: Senior Sergio Mercado’s free-kick was met by Nik Ruby’s forehead in the box and found the back of the net.

Senior Caleb Jackson played a through ball to Henry for the final goal of the game with 14 minutes to play.

Henry moved to the defense when center back Gabe Hodge received a yellow card for a foul, with 10 minutes left.

“He’s just a special player,” McMann said of Henry. “When Gabe got the yellow, the guys know that if Gabe goes out, Ryan goes back. That shut a lot of their attack down.”

The Rebels are coming off a momentum-building draw with Somerset — the last remaining undefeated team in the 12th Region. Through eight Briar Jumpers’ games, Boyle remains the only team to score four goals.

“I thought we played well. Somerset is talented, they were 7-0 when we went there,” McMann said. “Getting a draw at that place, we were pleased with it.”

And, following Thursday’s win, McMann likes the way his team is shaping up with eight regular-season games remaining.

“I thought tonight might have been the best we’ve played all season, at least possession-wise. I’m feeling good,” he said.