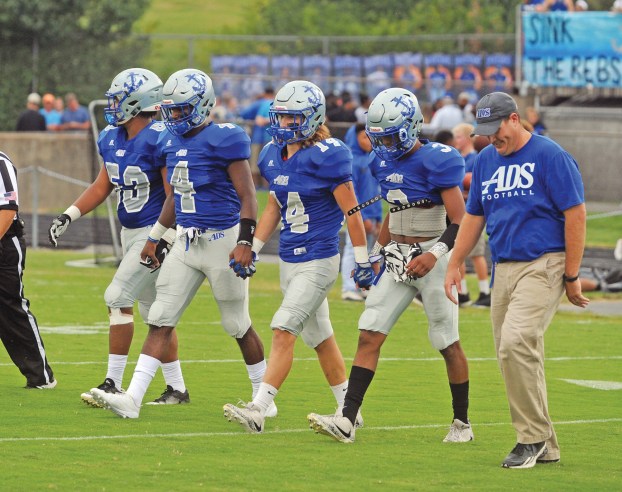 Four of those teams have given up fewer than 50 points this year.

Danville is one of them, and the Admirals’ defense has been heaping on the pressure for opponents all season. The Ads have forced more turnovers than any other undefeated team in 2A with 14 — eight interceptions and six fumble recoveries.

It all starts up front for the Admirals: Defensive tackle Christian Hill has had a renaissance senior season, blowing up plays in the backfield and forcing teams out of their comfort zone. He’s focused 100 percent on defense this season after playing both ways last year, and it has paid off: He has 23 tackles, five tackles for loss and three sacks this season.

“I feel like it’s helped him sustain his motor for four quarters,” Danville head coach Clay Clevenger said. “He’s made a lot of big plays for us already here in the first four games. We look forward to him keeping that up.”

Hill said he’s been improving because the guys across from him every day in practice are improving. Fellow defensive tackle James Patton has 14 tackles and three tackles for loss this year. Danville’s offensive line features a strong group of juniors who cut their teeth as underclassmen last season.

“I feel like they’ve matured a whole lot,” Hill said. “They’ve had to take a big role early in their careers, and this year and next year are going to be big for them. They’re already prepared. It’s coming out, working every day and they don’t back down from the job. All of them come in and put in work.”

There’s depth on the line, too, which helps Clevenger and his coaching staff in practice.

“I think that helps a lot. We’ve got some depth, so we’re able to get some good vs. good reps,” Clevenger said. “Biggest thing with (Christian), he’s a year older, a year more mature. I felt like he had a really good sophomore year. He may even admit that his junior year wasn’t as good as he expected, but I think he’s come out this year to try and help make a name for himself and show what kind of player he is.”

Hill’s strong senior campaign has helped his teammates: Senior outside linebackers Ethan Downey and Chase Tandy said he’s a big reason why the Ads’ turnover numbers are so high. 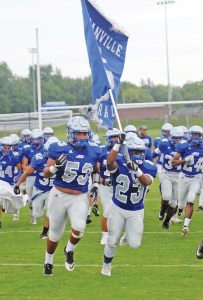 It’s a vicious cycle for the Admirals’ opponents: The Danville defensive line forces pressure in the backfield and the linebackers and defensive backs reap the rewards.

Hill said the entire defense is playing well as a unit. The guys behind him work to clog passing lanes so he and his teammates can wreak havoc in the backfield.

Danville’s defensive backs have five interceptions this year — three for David Walker and one each for D’Mauriae VanCleave and Tanner Ford. Downey has one interception and linebacker Darrian Bell has two.

“It all tends to go hand in hand,” Clevenger said. “We’ve got pretty good depth in our front seven so we’re able to roll some bodies. Don Harris is obviously a great three-year starter at inside linebacker. He and Darrian are doing a good job and Kishown Bartleson has played quite a bit there and has done well. Our outside linebackers, you’ve got Ethan and Jaleel (Warren) who started last year, but you’ve also got Chase Tandy who started the last couple of games and has played well. We’ve got kind of a three-man rotation there, too. I think the biggest thing is trying to get guys with high motors to play hard for all four quarters. That’s always a big key.”

Bell is one of the youngest of the group as a sophomore, but he’s been a playmaker. He’s got two fumble recoveries — including one for a touchdown — to go with his two picks this season. He also has 41 tackles to lead the unit.

It’s seniors like Hill and Harris, who have led by example for younger players to follow, that has helped Danville return to the 2A elite, Downey said. Harris has 28 tackles this season to go with his massive production on offense — he leads the team with 327 rushing yards so far this year.

“Playing both ways like Christian did last year, it shows the younger guys we have the right way to be a great teammate and leader,” Downey said. “He stepped up last year and most definitely this year. Every year we’ve came out with great teams compared to what Danville has had in years, and I think it’s because we’ve all stepped up to a different level than what Danville has had in a long time.

“We lead these younger guys, like Darrian, when he was a freshman you would never think he’d be the player that he is now. And he has two more years left. He’s already great. I think that’s from us being leaders, showing him the tempo of everything. It’s pulling these guys the right way.” 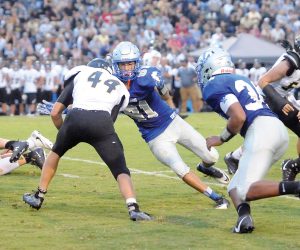 Experience together works in another way: Danville’s not running as much.

Well, that’s what the players say.

“Our coaches do a great job getting us to our drops,” Tandy said. “Plays kind of come straight to us instead of us trying to make them. I think it’s also because we’re selfless, it doesn’t matter if I’m the one to make the play or if it’s Christian, as long as we’re doing our role, the play is going to get made. If I force the guy back inside, Christian gets the sack and we’re all happy about that.”

Downey said filling those roles has led to a strong start this year: Danville opponents have gained an average of just 91 yards per game on the ground this year. Downey has 20 tackles this season, Warren has 17 tackles, two sacks and two tackles for loss and Tandy has chipped in 28 tackles, 1.5 sacks and one recovered fumble.

“Last year, we did a lot of chasing,” Downey said. “This year, there’s zero chasing for our linebackers and anyone. We’re there, we’re waiting for them to come to us.”

The line has played well this season, but Clevenger said he wants to see his players continue to improve their reads and physicality as the season progresses.

“I think just in how you play blocks, how physical you are. Sometimes we tend to try to use our athleticism to get around blocks instead of maybe playing through a guy,” Clevenger said. “Good teams are going to come at you and hold you accountable defensively at each position.”

One example of that was last year against Corbin: It was the first loss of the season for Danville, a 28-7 home defeat.

“Our line, last year we had a great season,” Downey said. “We started off kind of slow and we took an early L against Corbin. After that loss, it really just made these dudes push it. I’ve never seen them stop. They’re littler than other teams, but they’re the strongest guys you’ll ever play against. But that’s Danville. You don’t get huge bodies, but you get the guys that are mentally strong. That’s what we have on the line.”

That mentality carries over to practice, Tandy said.

“Their intensity is way better,” Tandy said. “They’ve picked it up a bunch, drills are way more quick, quick paced. Every drill is fast. Everybody picks their intensity up and I think that plays a big part in our game and on offense.”

“Coming into the year, we are playing a really tough schedule,” Clevenger said. “We don’t have a week where you can say ‘this team is (easy),’ we’ve been tested in the first four weeks by good teams and we’ll continue to get it. Each team has possessed something a little bit different, and Waggener is going to be able to put athletes on the field that are equal to or better than us. That’s going to be something, we saw a little bit of that against Douglass in the first game, but I felt like we handled that pretty well. It’ll be up to us to handle that again.”

Danville’s players feel like they have the experience to go up against any team — because the players they face in practice are just as talented.

“He’s really mobile but I feel like we get a good look at that every day in practice with D’Mauriae and Don running the ball,” Tandy said of Brents. “If we break down, it’ll be easier for us to make plays.”

“We have players, in my eyes, who are just as good as anyone we’ll play,” Downey said. “D’Mauriae, Christian, we don’t let what that player has affect us and how we play out there.”

“Our experience has taken a big role in how we play,” Hill said. “We’re so used to playing the game, it just comes to us. You make a play and you don’t even know it because you’re just so used to making the play over and over.”